The Great Wall and M2C 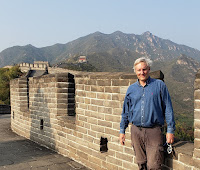 Last week I hiked along the Great Wall at Juyongguan, where the wall goes through a steep valley. Genghis Khan broke through the wall here twice (he was the only one to breach the wall during its 2,700 year history).

Genghis Khan used a clever "stratagem" comparable to the Nephite stratagem in Alma 56. In the year 1211, he lured the defenders out of the fortress to battle in the field, then surrounded them and captured the pass.*

The founding prophets set up a solid wall of defense regarding the critical events of the Restoration. Two of the most important fortresses are (i) the translation of the Book of Mormon and (ii) the historicity of the record. 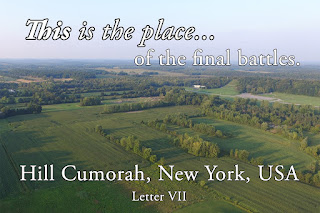 Joseph Smith and Oliver Cowdery declared in no uncertain terms that Joseph translated the engravings on the plates by using the Urim and Thummim that came with the plates.

The divine authenticity of the record is evidenced, in part, by the fact that the Hill Cumorah of Mormon 6:6 is in western New York. This was unambiguously established in Letter VII and other teachings of the prophets.

These facts were well known for decades and held up against innumerable attacks. The prophets repeatedly reaffirmed the truth and maintained the wall and these fortresses.

But then a few intellectuals were persuaded to abandon the fortresses in favor of revisionist history and M2C. They taught their theories and persuaded many, if not most, of their students and readers.

They've torn down the fortresses completely.
_____

According to these intellectuals, the prophets were wrong about the Hill Cumorah being in New York. Instead, it's somewhere in southern Mexico. They claim there are "two Cumorahs" (hence, M2C, or the Mesoamerican/two Cumorahs theory). They explain that the hill in New York is not the one referred to in Mormon 6:6. The New York Cumorah was a false tradition that originated in the early days of the Church.

The intellectuals claim the prophets misled the Church when they persistently and consistently taught that Cumorah was in New York. The prophets were expressing their personal, and incorrect, opinions, including members of the First Presidency speaking in General Conference.

But now the intellectuals have rescued the Church by figuring out that the "real" Cumorah is in southern Mexico. The New York Cumorah has been de-correlated. None of the rising generation knows anything about the teachings of the prophets on the topic.

The intellectuals are still searching Mexico for Cumorah, of course. They've got their maps and expeditions and LIDAR and all the rest, to no avail. And even though the Church is "neutral" on the subject, the employees are making sure that only M2C is being taught, as we'll see later this week.
_____

According to the intellectuals, the prophets were also wrong about the translation of the Book of Mormon. Instead of translating the engravings on the plates with the Urim and Thummim, as Joseph and Oliver repeatedly explained, Joseph didn't even use the plates. He didn't even translate anything. He just read words that appeared on a stone he put in a hat.
_____

Fortunately for us, the Great Wall metaphor is personal.

Every member of the Church makes a personal decision about whether to retain the wall built by the founding prophets, or to tear down that wall in favor of the philosophies of the intellectuals.

It's a clear choice. The choice does not involve intelligence, integrity, faithfulness, etc. Intelligent Church members can choose the prophets or the intellectuals regarding these two issues and remain completely faithful. No one should conflate testimony with personal preferences regarding prophets vs scholars.

For many people, though, the destruction of these two fortresses has been devastating.

We can all choose to believe whatever we want.

Hopefully everyone will at least make an informed decision.
_____
*Here's one account: 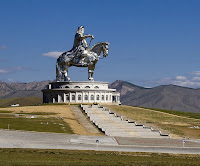 Also in 1211, after Genghis Khan captured Huailai in Hebei and Yanqing in Beijing, he chased the Jin army all the way to the Juyongguan Great Wall. Seeing the solid pass, Khan gave up the idea of attacking directly, but decided to lure the Jin soldiers out for a field battle. After several small-scale strikes, the Mongol soldiers threw down their weapons, left their horses and “escaped”. As expected, the Jin soldiers on guard left the pass to chase them. Suddenly, numerous Mongol soldiers appeared from nearby mountains and surrounded the Jin soldiers, defeated them and captured Juyongguan Pass.