The second element of the M2C perfect storm is the upcoming Sidney B. Sperry Symposium.

He wrote an article titled "Were there Two Cumorahs?" that is a must-read for anyone interested in the development of M2C. Here's a link:

In his article, Brother Sperry endorsed the Two Cumorahs theory (without acknowledging the RLDS scholars who developed it). He notes the two "camps" in the Church, one supporting the New York Cumorah and the other supporting M2C on the grounds that the hill in New York was named after the one in "Middle America." (Sperry refers to Central America as Middle America.)

IOW, the camps consist of those who accept the teachings of the prophets about the New York Cumorah, and those who repudiate those teachings.

Sperry writes, "Now which of these two points of view is correct? It would be desirable, if possible, to come to a unity in the matter. Truth should never be on the defensive, but sometimes it is hard to decide just where it is. Perhaps most people of the Church hold to the traditional view of Cumorah, and, indeed, I have defended that view in some of my writings. But in recent years we have again gone over the Book of Mormon evidence very carefully and are prepared to present what we feel are the elements of the strongest case that can be made for a Cumorah in Middle America."

The "strongest case" consists of assuming the events of the Book of Mormon took place in Mesoamerica and then showing that New York is too far away.

For example, Sperry writes, "No one would question the fact that this hill [Shim] and Antum were in turn in the larger territory of Desolation, somewhere in or about Middle America."

This is wonderful irony, because what Sperry states as a "fact" is his pure speculation. Meanwhile, Sperry rejects what Oliver Cowdery, in Letter VII, stated was a fact; i.e., that the final battles took place in the mile-wide valley west of the Hill Cumorah in New York.
_____

One thing everyone can agree on is that western New York is probably too far from Mesoamerica for (i) Cumorah to be in New York and (ii) Mesoamerica to be the setting of the rest of the events of the Book of Mormon.

The question is which site is known and which is speculative.

In my view, the New York Cumorah is the only certain Book of Mormon setting, based on the teachings of the prophets. Oliver Cowdery knew Cumorah was in New York because he and Joseph had visited Mormon's depository in the hill on multiple occasions. Plus, the New York setting fits relevant anthropology, archaeology, etc.

I don't exclude Mesoamerica as a possible setting for other Book of Mormon events, but I think distance from New York correlates with probability; i.e., the further a theoretical setting is from New York, the less probable the setting is.

Others, such as Brother Sperry and current M2C advocates, claim the opposite; i.e., they think the further a theoretical setting is from Mesoamerica, the less probable it is. Why? Because they take Mesoamerica as a fact and the teachings of the prophets about Cumorah as ignorant speculation and incorrect opinions.
_____

This brings us to this year's Sperry Symposium.

You can read the agenda here:

I'm sure the presentations will be awesome, insightful, inspiring, etc. The symposium focuses on the text and content of Alma 36-42, which one might think has nothing to do with Book of Mormon geography issues.

But the symposium has M2C all over it. 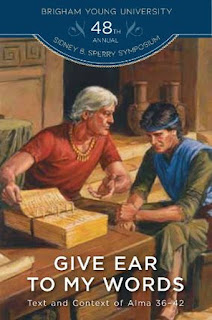 The symposium is named after Brother Sperry, one of the most prominent scholars to promote M2C at BYU.

Notice the graphic on the cover of the program. It depicts Alma counseling his son in a Mesoamerican setting.

The Keynote Address is by Tad R. Callister, whose latest book supports Book of Mormon Central both financially and philosophically.

The Endnote Address, "Mormon the Writer: Turning History into Story," is by Brant A. Gardner, one of the most adamant proponents of M2C today.

All of this lends support and credibility to M2C as the only approved interpretation of the Book of Mormon.

It is the second element of the perfect storm.