Sometimes our M2C friends unintentionally make a strong case for the New York Cumorah without realizing it. A good example is a recent post titled "Zeroing in on Cumorah" on the Book of Mormon Resources blog, here:
http://bookofmormonresources.blogspot.com/2020/04/zeroing-in-on-cumorah.html

I've mentioned before that Kirk, who writes this blog, is a great guy, reasonable and easy to talk with. He's sincere and does a lot of good. His M2C bias confirmation is well entrenched, however, as we'll see in this post. 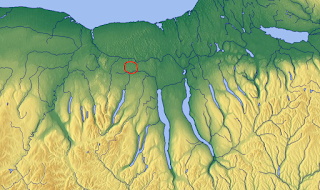 Keep this map in mind as you read this post.

The red circle is the location of the Hill Cumorah. The huge body of water to the north is Lake Ontario, one of the Great Lakes. The largest of the finger lakes are Seneca Lake and Cayuga Lake.The lake to the east is Oneida Lake. Each of these lakes has more surface area than the Sea of Galilee.
_____

The blog says this:

Mosiah 8:8 adds an additional element to the list of textual criteria that will help us identify the land of Cumorah. The land where we will find hill Ramah/Cumorah was not just a land of many waters, rivers, and fountains Mormon 6:4. (The term "many waters" as used by Book of Mormon authors refers to salt water ocean as in 1 Nephi 17:5 and Psalm 93:4. See the blog article "Many Waters.")

The term "many waters" can refer to oceans, but it does not connote salt water.

The Hebrew words rabbim (many) and mayim (water) have nothing to do with salt. The Hebrew  word for "sea" (1 Nephi 17:5) also refers to size, not salt vs. fresh water. We have a Red Sea (salt water) and a Sea of Galilee (fresh water).

Numbers 24:6 As the valleys are they spread forth, as gardens by the river’s side, as the trees of lign aloes which the Lord hath planted, and as cedar trees beside the waters.
7. He shall pour the water out of his buckets, and his seed shall be in many waters, and his king shall be higher than Agag, and his kingdom shall be exalted.


The context is a river valley and agriculture. The Hebrew here is be-ma-yim rab-bim, meaning "of waters many." It has nothing to do with salt. Alternative translations show the term cannot mean "salt water" at all:

New International Version: Water will flow from their buckets; their seed will have abundant water.
Contemporary English Version: You and your descendants will prosper like an orchard beside a stream.
Good News Translation: They will have abundant rainfall And plant their seed in well-watered fields.
GOD'S WORD® Translation: Water will flow from their buckets, and their crops will have plenty of water.

Here's another example that shows "many waters" cannot refer to salt water because salt water is not going to make a vineyard fruitful.

Ezekiel 19:10 Thy mother is like a vine in thy blood, planted by the waters: she was fruitful and full of branches by reason of many waters.

The Hebrew here is mim-ma-yim rab-bim, meaning "because of waters many." The same phrase is translated as "waters great" in Psalm 144:7 and as "because of the multitude of waters" in Ezekiel 31:5. None of these connote salt water.

The Greek words in Revelation are hydaton (water, from which we get the English hydration) pollon (many). There is no connection with "salt."

Consequently, the most we can say about "many waters" is that there are "many waters." The term can mean ocean, lake, river, or any other abundance of water. It says nothing about salt vs fresh water.
_____

Kirk goes on to say this:

The OED says "among" derives from crowd or assemblage and means "surrounded by" locally.... Ether 9:3 tells us there was a seacoast due east of hill Ramah/Cumorah. Mosiah 8:8's use of the word "among" tells us salt water ocean surrounds the land of Cumorah on more than one side.

Ether 9:3 says Omer passed by Shim, came over by the place where the Nephites were destroyed [Cumorah], and from thence eastward to Ablom, by the sea shore. It doesn't say he went "due east." If you go "eastward" from Cumorah, you run into the finger lakes, lake Oneida, and (depending on where the coastline was thousands of years ago) Lake Ontario.

Mosiah 8:8 says Limhi's explorers "traveled in a land among many waters."

Let's say an army captain used Kirk's definition. The general gives the order, "surround the enemy." The captain "surrounds" the enemy by setting up on "more than one side," leaving most of the perimeter unsecured. Would that general accept Kirk's application of the term?

Kirk compounds his bizarre definition with an illustration:

The Book of Mormon geographic correlation that passed a strict audit with a perfect score of 100% (see the blog article "Auditing Book of Mormon Geography Models") places the land of Cumorah in the Tuxtla Mountain region of southern Veracruz where it is literally surrounded by salt water on two sides.

Of course, that "audit" is a self-serving sham; it merely checks whether a model "fits" the M2C interpretation of the text. In my view, any model that scores well on that audit by definition contradicts the text. But look at this phrase: "literally surrounded by salt water on two sides."

This is the type of analysis we find throughout the M2C literature. They change definitions and expect everyone to salute and agree. But just because the fine young scholars they hire talk themselves into buying off on this approach doesn't mean anyone else has to.

Which brings up the next part of Kirk's analysis that involves "north countries." 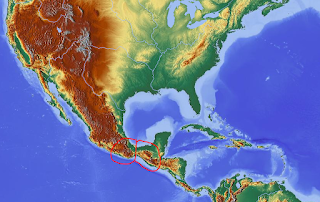 According to M2C, the north country and south country, land northward and land southward, involve the areas circled on this map in red.

The M2C explanations of this work well if you're in the M2C bubble, apparently. But to an outside observer, it makes no sense.

In my view, the terms "northward" and "southward" are relative terms the fluctuate throughout the text depending on the context.

If you prefer to interpret those terms as proper nouns, that's fine, too. But either way, they fit much better when applied to a New York Cumorah.

We've discussed that before http://www.bookofmormoncentralamerica.com/2020/01/rules-of-interpretation.html, so we won't belabor it here.
_____

Not only are there abundant lakes and rivers all around, but the water constantly flows in the sense of the "many waters" of Numbers 24:7.

The water table around Cumorah is quite high; the forests on our farm about one mile from Cumorah are always full of pools of water and the springs flow year-round.

It might be difficult to tell in this photo, but the water pools here all the time. It's almost a marsh (and, actually, we do have a marsh as well).