People who are experiencing cognitive dissonance follow a circular pattern of thinking. They do everything they can to maintain their worldview; no matter what you say, they will avoid your point by shifting to something else, and ultimately come right back to the beginning.

On my desk right now a 1917 copy of the L.E. Hills book titled Geography of Mexico and Central America from 2234 B.C. to 421 A.D., published in Independence, Missouri.

It makes a case for M2C the same way the M2C promoters do it today, over 100 years later. 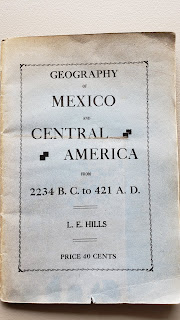 Hills included all the elements.

- quotations about Copan from Stephens and Catherwood "Travels in Central America" (as Hills named the book that was cited in anonymous articles in the 1842 Times and Seasons that started this whole thing).

- discussion of Quetzal-Coatl and other legends.

- Lehi crossing the Indian and Pacific Oceans to land in Central America.

- an explanation that the "hill in New York" is too far away from Mesoamerica to be the Hill Cumorah of Mormon 6:6 or the Hill Ramah, and that the real Cumorah is in southern Mexico.

And, of course, the book completely ignores the teachings of the prophets about Cumorah.

Hills submitted his book "to committees and students of Archaeology in the Church," meaning the RLDS Church. He rationalized his approach the same way M2C proponents do today. "I am convinced that the geography, taken from a close study of location as found in the record itself, is the very best evidence that can be furnished to authenticate the record."
_____

As I've discussed these issues over the last few years, I've observed this train of cognitive dissonance among M2C advocates and their followers.

1. When you point out the absurdity of relying on the anonymous 1842 Times and Seasons articles, which cited post-400 AD ruins as Book of Mormon sites among other things, they say they never relied on those articles.

2. When you show them that their own materials cited those articles as justification, they say they no longer rely on them, but instead they rely on their interpretation of the text (like Hills).

3. When you point out their interpretation was driven by the need to justify the Mesoamerican setting because of the Times and Seasons articles (i.e., their interpretation is merely circular reasoning), they claim there are elements of Mayan society that are "parallels" to Nephite society.

4. When you point out that these "parallels" are common to most human societies and there are far more differences than similarities, they return to the anonymous 1842 Times and Seasons articles and claim Joseph Smith wrote or at least endorsed those.

5. When you point out that the articles say nothing about Cumorah and that Joseph explicitly endorsed Letter VII, which was written with Joseph's participation by the Assistant President of the Church in the First Presidency, and that all of Joseph's contemporaries and successors who have ever addressed the topic have reaffirmed the New York Cumorah, they say the prophets were all wrong and were merely giving their own opinions as uninformed, unqualified speculators.

6. When you point out they are repudiating the prophets, they say you are calling them apostates.

7. When you point out you aren't calling anyone an apostate but you're just stating an obvious fact they openly acknowledge, they say none of this has been revealed so those prophets testified to the truth of their own erroneous opinions in General Conference, in their books, etc. Furthermore, they say that Oliver Cowdery did not actually enter the depository of Nephite records in the "hill in New York," that Brigham Young and others who spoke about the depository were mistaken or talking about a "spiritual experience" of the depository that is actually in southern Mexico, and that Lucy Mack Smith, David Whitmer, and others had faulty memories every time they mentioned Cumorah (but were otherwise accurate about everything).

8. When you point out the descriptions in the Book of Mormon align closely to what is now known about ancient North America, they say that critics have accused Joseph of composing the text based on common 1800s beliefs and legends about those ancient inhabitants.

9. When you point out that the early critics didn't have as much information about archaeology, anthropology, geology, etc. as we do today, all of which contradicts key 1800s-era common beliefs but corroborates what the Book of Mormon actually says, they say you're interpreting the text wrong because the text clearly describes Mesoamerica.

10. When you point out that the text can easily be interpreted to incorporate the New York Cumorah, Joseph's other statements about locations, and the relevant geographical and geological features, as well as Lehi's route across the Atlantic which not only makes sense but has been demonstrated in the real world, they say it's impossible because of the anonymous 1842 Times and Seasons articles that they insist Joseph wrote.

And you start all over again.

As I wrote at the beginning, people who are experiencing cognitive dissonance follow this pattern of thinking. They do everything they can to maintain their worldview.

One important element of maintaining one's worldview is to have more people adopt it. The smart ones know that once someone adopts a worldview, it is difficult to break out of this cognitive dissonance. That's why they've incorporated M2C everywhere they can, especially where it can influence young people.

M2C is one of the most perfect examples of cognitive dissonance you'll ever see, and it has been going on for over 100 years.