I'm among those few remaining Latter-day Saints who still believe Joseph Smith translated the Nephite plates with the Urim and Thummim. Some claim that makes me a "fundamentalist" or even a heretic, but I think there is strong extrinsic evidence to support what Joseph and Oliver claimed.

Nevertheless, the trend in the Church is toward embracing the new narrative that Joseph Smith didn't translate the Book of Mormon.

For example, this week Dan the Interpreter is going to interview Stanford Carmack. Carmack and Royal Skousen have worked together to create the "Early Modern English theory," or EMET.

I don't know how many ordinary people are interested in this topic, but it's not as difficult or complex as it is made out to be. Because it has important implications, I think Church members need to become familiar with EMET.

You can read the announcement here:
https://www.patheos.com/blogs/danpeterson/2020/05/bad-grammar-and-early-modern-english-on-the-radio.html?utm_medium=email&utm_source=BRSS&utm_campaign=Latter-day+Saint&utm_content=366

We have great respect for scholars such as Stanford, Royal, Dan, etc., even though they promote M2C, SITH, EMET, etc. They are all fine people, faithful Church members, etc. They make important contributions in many ways. But that doesn't mean we agree with everything they teach.*

EMET is a natural progression from M2C. M2C teaches that Joseph Smith didn't know much about the Book of Mormon and merely speculated about the New York Cumorah, the plains of the Nephites, Zelph, etc., and that he learned about the ancient civilizations in America not from Moroni and Nephi, but from scholars such as Stephens and Catherwood (hence the anonymous 1842 Times and Seasons articles that M2C relies upon).

Such theories enable the credentialed class to attract followers, fame and funding.

As we've seen the Academic Cycle insures that eventually, academic theories become mainstream. It has happened with M2C and SITH and will undoubtedly happen with EMET. There will be Ensign articles. There will be references in the Gospel Topics Essays. Eventually it will be in the manuals and missionary lessons.

Before EMET becomes mainstream, it's important for people to understand it so they can make informed decisions.
_____

EMET teaches that Joseph Smith could not have translated the plates because the Book of Mormon text includes grammar elements of "Early Modern English" that were obsolete in Joseph's day. Joseph could not have known or imitated these elements. 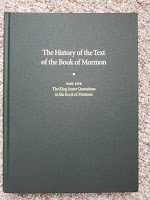 In my view, the evidence they provide is interesting and useful for many purposes, but their conclusion is flawed for two basic reasons. (I have written more detailed critiques that I haven't posted or published yet.)

2. They assume that published materials in their database reflect the speech patterns, grammar, vocabulary, etc., of people in rural Vermont and western New York in 1828-9, including Joseph Smith, Jr.

To support their assumptions, they claim that Joseph's writings in that period, such as his 1832 history, don't contain the same EME elements that are found in the Book of Mormon. However, by 1832 Joseph was in Kirtland, learning from better educated people (such as Frederick G. Williams, who shared writing duties on the 1832 history). We don't even know if the 1832 history was dictated or copied from a previous written document.

Speaking and writing are separate skills. People can speak even when they cannot write. We are familiar with the people of Zarahemla when Mosiah first encountered them. They had no written records but they could communicate verbally and recite their history and genealogy from memory.

People don't speak the way they write; writing is slower and more deliberative. Published materials typically involve editing. Plus, we don't have physical or electronic copies of everything ever published in English. Published material can document changes in written language that may relate in some ways to spoken language, but even today in the United States, where everyone reads the same materials, people speak differently in different parts of the country.

Regarding English specifically, colonists in various parts of the world tended to retain the English from their places of origin in England, and different regions of England had different dialects. Even today, there remain 37 dialects in England.

Because of this "colonial lag," Americans in the 19th century understood Shakespeare more easily than their British cousins, whose language changed more rapidly. For an overview, see
https://www.thehistoryofenglish.com/history_late_modern.html.

I realize there are academic responses to these observations, and I encourage you to consider them. I just don't find them persuasive at all because Joseph Smith's explanation is far more persuasive and far better supported by the evidence.

If people are interested, I'll explain more in upcoming posts.
_____

*Some of their employees and followers take our criticisms personally, a common emotional approach. You'll see them post on the Internet as anonymous trolls. We recognize their adoring attachment to their mentors and empathize with them, and we consider their comments in that context. They are a good example of this observation: "If you believe people use reason for the important decisions in life, you will go through life feeling confused and frustrated that others seem to have bad reasoning skills." Scott Adams, How to Fail In Everything and Still Win Big.