Review of Gospel Topics Entry on Book of Mormon Geography

Recently we looked at the Gospel Topics entry on Book of Mormon Geography.

Today we'll focus on one aspect of the entry in light of an article in the Interpreter on SITH. For those interested, I posted a peer review of that article here:

One of the most delightful examples of M2C Groupthink is the Gospel Topics entry on Book of Mormon Geography. I bring this up because the Interpreter article about SITH that I peer reviewed includes a fascinating twist on Joseph Smith as editor of the Times and Seasons.

The Prophet Joseph Smith himself accepted what he felt was evidence of Book of Mormon civilizations in both North America and Central America.

[This is a clever rhetorical sentence. It makes specific factual claims about what Joseph thought, and then diminished his credibility by framing that evidence as merely what he "felt." The sentence is designed to establish skepticism about what follows next.

When we look at the evidence cited to support the two claims, we see that they are actually quite different in terms of credibility and reliability, although the Gospel Topics entry treats them as equivalent. Notice also that the entry makes a distinction between "North" and "Central" America.]

Here is the evidence cited regarding North America.

While traveling with Zion’s Camp in 1834, Joseph wrote to his wife Emma that they were “wandering over the plains of the Nephites, recounting occasionally the history of the Book of Mormon, roving over the mounds of that once beloved people of the Lord, picking up their skulls and their bones, as a proof of its divine authenticity.”1

[By any standard, this is direct evidence of what Joseph thought, in his own words. It is a statement of fact; there is no hint that he merely "felt" these mounds were evidence of Book of Mormon civilizations. Instead, Joseph personally declared the mounds and bones in Ohio, Indiana and Illinois were "proof of its divine authenticity." He does not equivocate or speculate. Words cannot be more unambiguous than this.]

Here is the evidence cited regarding Central America.

In 1842, the Church newspaper Times and Seasons published articles under Joseph Smith’s editorship that identified the ruins of ancient native civilizations in Mexico and Central America as further evidence of the Book of Mormon’s historicity.2

[By any standard, this is not direct evidence of what Joseph thought. The entry engages in mind-reading when it states, as fact, that "Joseph Smith himself accepted what he felt was evidence of Book of Mormon civilizations in... Central America."

Worse, this mind-reading is based on compound questionable assumptions: first, that Joseph was the actual acting editor, and not merely the nominal editor, and second, that as "editor" he allowed material in the Times and Seasons only if he personally agreed with it. Both of those assumptions are too tenuous to support the factual claim that he "accepted" what he "felt" was evidence of Book of Mormon civilizations in Central America.

An accurate statement in the Gospel Topics entry would be something such as this: The Prophet Joseph Smith himself identified evidence of Book of Mormon civilizations in the Midwestern United States, and may have approved speculation about additional evidence in Central America.]

We can see from the equivalence given to these two substantially different pieces of evidence that the author(s) of the Gospel Topics entry had an agenda to read Central America into Joseph's mind. To do so, the entry assigned great weight to the mere assumptions that (i) Joseph was an active editor who (ii) only allowed material to be published if he personally agreed with it.

I bring this up because in the Interpreter article, we see a different agenda--the establishment of SITH (the stone-in-the-hat theory of translation).

One obstacle to SITH (and to M2C) is the Wentworth letter, which was published as "Church History" in the March 1, 1842, Times and Seasons above Joseph's signature.

In the Wentworth letter, Joseph specifically claims that "Through the medium of the Urim and Thummim I translated the record by the gift, and power of God." Obviously, that's a problem for those who claim Joseph didn't use the Urim and Thummim. As we noted before, the Gospel Topics Essay on Translation handled this obstacle by simply omitting this passage, an astonishing feat of censorship in an essay that purportedly informs the Saints about the translation.

The author of  the Interpreter article used a different strategy to evade the problem of the Wentworth letter. The article questions Joseph's ownership not only of material published under his "editorship" but of this specific well-known article he separately signed and republished later. Look at what the article says:

First, the description of the stones as transparent in the Wentworth Letter may have not been intended by Joseph Smith... Although the Wentworth letter is printed over his name, it is unclear how involved he was in its composition and how much control he exerted over the text. p. 56


This form of "situational responsibility" assigns credibility and authorship based not on extrinsic evidentiary factors, but on the degree of agreement with the respective authors' views.

We see a lot of that in the work of the M2C and SITH citation cartels. Just look at all the credibility assigned to Emma Smith's "Last Testimony" and David Whitmer's pamphlet, "An Address to All Believers in Christ."

In those two examples, our SITH promoters assign credibility to different parts of the same documents based on whether they agree or disagree with the different parts. 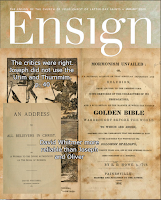 The end result is our beloved Ensign referring readers to David Whitmer's pamphlet that claims Joseph Smith was a fallen prophet who changed early revelations, never received any Priesthood from angelic messengers, etc.

We discussed that here:

In my view, it makes more sense to teach the Saints and the world what the prophets have taught.