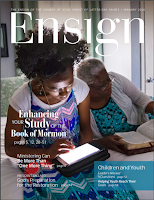 The January 2020 Ensign is awesome. It's full of helpful articles about Church history and the Book of Mormon.

The timeline titled "Seeing the Lord's Hand" starting on page 22 is a wonderful summary of world events leading up to the Restoration and the present day. 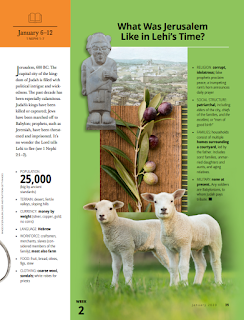 One of the nice features is the section that correlates with each week of the Come Follow Me curriculum.

This graphic on page 35 is a nice introduction to the world Lehi and his family left.

It points out that Jerusalem had a population estimated at 25,000, which was considered "big by ancient standards."

Keep that in mind as we study the Book of Mormon this year.

There's an article titled "Have the Greatest Year with the Greatest Book" that includes good idea about how to improve our study. One tagline reads "Decide now to make 2020 the year you and your family immerse yourselves in
the Book of Mormon."

I encourage people to read the Ensign regularly, especially this year when we're all focused on the Book of Mormon.
_____

As awesome as the January Ensign is, people have contacted me with concerns about the M2C artwork and revisionist Church history inside.

We have to expect this to continue. It's not a big deal. Most readers don't even notice. Some of our M2C intellectuals and their followers will claim this as a "victory" or something, which is bizarre.

Joseph himself did not elaborate about the process of translation, but Oliver, David, and Emma provided some additional information. Oliver said: “These were days never to be forgotten—to sit under the sound of a voice dictated by the inspiration of heaven, awakened the utmost gratitude of this bosom! Day after day I continued, uninterrupted, to write from [Joseph’s] mouth, as he translated with the Urim and Thummim, or, as the Nephites would have said, ‘Interpreters,’ the history or record called ‘The Book of Mormon’” ( Joseph Smith—History 1:71, note).

So far, so good. a quotation from the scriptures, written by Oliver Cowdery, unambiguously establishing that Joseph translated the text with the Nephite interpreters they called the Urim and Thummim.

But then we read this:

The “interpreters” used by Joseph during the translation process included the “two stones in
silver bows” that were deposited by Moroni with the plates (see Joseph Smith—History 1:35.) In
addition to these two seer stones, Joseph used at least one other seer stone that the Lord had
provided.7

The Lord provided? Where is there any evidence that Joseph, or Oliver, or anyone else claimed the Lord provided this stone? This is the seer stone Joseph allegedly found in a well.

It's a great article, overall, but it started a theme that continues to cause a lot of confusion in the Church. For example, the article says In another Book of Mormon account, Alma the Younger gives the interpreters to his son Helaman. “Preserve these interpreters,” Alma counsels him, referring to the two stones in silver bows. But Alma also quotes a prophecy that appears to refer to a single stone: “And the Lord said: I will prepare unto my servant Gazelem, a stone, which shall shine forth in darkness unto light.”(Alma 37:21, 23).

But the original version of Alma 37 did not say interpreters. It said directors. The language was changed in 1920. When Oliver Cowdery said "interpreters" he could not have been referring to Alma 37.

The article also claimed this: By 1833, Joseph Smith and his associates began using the biblical term “Urim and Thummim” to refer to any stones used to receive divine revelations, including both the Nephite interpreters and the single seer stone.17 This imprecise terminology has complicated attempts to reconstruct the exact method by which Joseph Smith translated the Book of Mormon.

Note 17 refers to the Wilford Woodruff account of seeing the Urim and Thummim in Nauvoo, but Woodruff never said he saw a seer stone.

Besides, as anyone knows who has read the 1834 book Mormonism Unvailed, there was a clear difference between the Urim and Thummim and the seer or "peep" stones that everyone understood. That's why it is significant--critical--that Joseph and Oliver always said Joseph translated with the Urim and Thummim and never said he translated with a seer stone.


David Whitmer, whose family provided a place for Joseph and Oliver to complete the work of translation, provided this additional information: “Joseph Smith would put the seer stone into a hat, and put his face in the hat, drawing it closely around his face to exclude the light; and in the darkness the spiritual light would shine. A piece of something resembling parchment would appear, and on that appeared the writing. One character at a time would appear, and under it was the interpretation in English. Brother Joseph would read off the English to Oliver Cowdery, who was his principal scribe, and when it was written down and repeated to Brother Joseph to see if it was correct, then it would disappear, and another character with the interpretation would appear. Thus the Book of Mormon was translated by the gift and power of God, and not by any power of man.” 8

8. Whitmer, An Address to All Believers in Christ, 12

Interested readers will naturally follow up with David Whitmer's book, available here, which teaches that "Joseph Smith... after being called of God to translate his sacred word--the Book of Mormon--drifted into many errors and gave many revelations to introduce doctrines, ordinances and office in the church, which are in conflict with Christ's teachings... Joseph Smith drifting into errors after translating the Book of Mormon is a stumbling block to many..."

Obviously, the Ensign does not condone that part of David Whitmer's book, but why accept uncritically any of that book? Why refer readers to it at all?

I'll have more to discuss on that in upcoming days.