The Restoration and the July 2020 Ensign

The Restoration of the Gospel of Jesus Christ is the most important news in the world.
The Church has implemented the Restoration by creating a worldwide community of faithful, loving Saints dedicated to serving one another. It offers clarity about the plan of salvation and redemption. It offers temples, chapels, schools, farms and organized charity with abundant resources. It offers a pathway to the establishment of Zion, a society in which there are not rich and poor, but in which people have all things common among them, living in harmony and love one for another.
Most people in the world seek such a society, but they don't know where to find it. With all the current turmoil, there has never been a better time for the message of the Restoration.
_____
In 2018, Elder Kevin Pearson of the Seventy gave an excellent presentation, as reported in this press release:
https://www.mormonnewsroom.org/article/elder-pearson-independent-voices-needed-sustain-faith 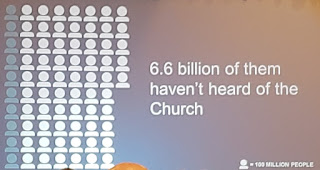 He noted that about half of the 1 billion people on Earth who have heard of the Church have an unfavorable impression. But he also offered some good news.
Elder Pearson said the Church’s effort to take the gospel of Jesus Christ to all the world presents a “massive challenge” due to a lack of awareness of the Church.
He said as many as 6.6 billion people of the 7.6 billion who inhabit the earth have never heard about the gospel.
At first glance, that might seem like a problem. Nearly 200 years after the Restoration and to this day, most of the world's population has heard nothing about it.
This is an opportunity and blessing, because it means that 6.6 billion people have a chance to hear the clear message of the Restoration more effectively than ever before.
But what, exactly, is the message today?
_____
There are innumerable voices shouting for attention, making claims, accusations, promises, etc. on every imaginable topic. In this cacophony, the message of the Restoration is obscure to non-existent in most of the world.
The Book of Mormon is the instrument God designed  to “sweep the earth as with a flood, to gather out [His] elect.” (Moses 7:62.)
Because most of the world has never heard of the Restoration, we members of the Church have an opportunity to get our story straight on the Book of Mormon before most of the world hears about it for the first time.
But what, exactly, are we supposed to tell people?
For my entire life, until recently, the message of the Restoration included some simple, clear points. Lately, these points have been... let's say modified. The modifications leave people confused about the message of the Restoration, so I offer this comparison chart.
Which column makes more sense to you?
Which column would make more sense to people you know?
Which column would make more sense to the world at large?
The left column involves convoluted explanations that contradict the sources from the right column.
The right column involves simple declarative statements of fact from Joseph Smith, Oliver Cowdery, and the scriptures (Book of Mormon, Doctrine and Covenants, and Pearl of Great Price).
I bring this up because of the July 2020 Ensign.
We are left wondering what to do. Do we share the Ensign with our nonmember friends? Do we tell them the narrative in the left column above?
Or do we tell them the narrative in the right column above and encourage them to study the scriptures and the teachings of the prophets?
_____ 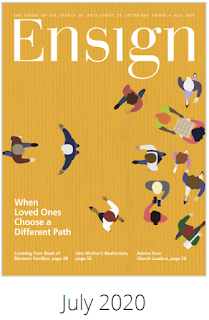 We love our Ensign, but sometimes we wonder what's going on.
The July 2020 Ensign features a cover illustration with the heading, "When Loved Ones Choose a Different Path."

Those are fine articles that address a topic of great concern in our day. They could be helpful for many people.

But incredibly, the same issue discusses Church history in a manner that undermines the faith of many people and impedes missionary work.

Surveys, social media, and anecdotal data indicate that two of the top reasons why people "choose a different path" are loss of faith in (i) the historicity of the Book of Mormon and (ii) Joseph Smith's role as a prophet. Both topics are directly related to Church history.

As we saw in the table above, influential LDS intellectuals, including historians, are now teaching that the prophets were wrong about (i) the New York Cumorah and (ii) the translation of the Book of Mormon. We see this in the Saints book, the Gospel Topics Essays, and in the Ensign.

M2C teaches LDS students from an early age to disbelieve the teachings of the prophets about the New York Cumorah. Once that concept is firmly imprinted, it is much easier for students to reject the teachings of the prophets on other topics, including Joseph Smith's use of the Urim and Thummim to translate the plates. Some of our LDS intellectuals are now teaching that not only did Joseph not actually use the plates, but Joseph didn't really translate anything. Instead, the Book of Mormon is the product of an unknown translator (or composer) from the 1600s who arranged to have the words appear on the supernatural teleprompter known as the stone in the hat.

SITH, the stone-in-the-hat theory of Book of Mormon translation, is one of the intellectual descendants of M2C.

Let's look at how the July 2020 Ensign approaches Church history. Tomorrow we'll look at the Gospel Topics Essay on the Translation to see how these themes have developed.
_____

Excerpts from the Ensign.

How do we know if a source about Church history is reliable?

This is awesome. Everyone wants history to become accessible, available, and understandable, without hiding or censoring history.
We all hoped the Saints books would fulfill those aspirations.
Instead, Saints, volume 1, intentionally censored Cumorah to accommodate M2C. It set forth a fake version of the Mary Whitmer story by omitting what Mary herself said, as well as what David Whitmer said, in favor of a theory that resurrected beings (Moroni) are capable of shape-shifting, all because the intellectuals insist the prophets were wrong about the New York Cumorah. Saints also incorporated SITH, as we'll discuss below.
Consequently, Church members throughout the world will never learn what the prophets have taught about the New York Cumorah and the translation of the Book of Mormon. Instead, they'll learn only the theories of certain intellectuals.

We all know that the challenge in the information age is not to find answers﻿—we’re surrounded by answers﻿—but to discern between good answers and bad answers, good information and bad information.

This is a key point. We should be able to rely on Church publications to provide good answers based on good information.

However, when it comes to M2C and SITH, our intellectuals focus on their own interpretations instead of what the prophets have taught. We'll look at examples from the Gospel Topics Essays tomorrow.

There are so many discussions online about our history, and most of these discussions produce a lot more heat than light.

Be careful about sources of information that just seek to tear people down.

This is excellent advice. We are left to wonder, why do our intellectuals rely on sources that sought to tear down Joseph Smith, such as David Whitmer's "An Address to all Believers in Christ?" and the 1834 book, Mormonism Unvailed?

Look instead for sources of information that are based on the records left by the people themselves and that seek to be fair to them.

Here's another excerpt from the July 2020 Ensign:

What role did the Urim and Thummim play in the translation of the Book of Mormon?

Joseph Smith translated the Book of Mormon by the gift and power of God.

This is a recent meme we're seeing more and more. For decades, prophets have testified that Joseph Smith translated the plates with the Urim and Thummim. But that's not what our intellectuals are teaching today. Instead, they are teaching SITH, which, until a few years ago, only Joseph's critics and enemies taught.
For example, an official explanation in the Joseph Smith Paper says, "Regarding the mode of translation, Joseph Smith himself stated only that it was done “by the gift and power of God.”

That's a patently false statement because that's not all Joseph said. Joseph actually wrote this:

"With the records was found a curious instrument which the ancients called 'Urim and Thummim,' which consisted of two transparent stones set in the rim of a bow fastened to a breastplate. Through the medium of the Urim and Thummim I translated the record by the gift, and power of God."
https://www.josephsmithpapers.org/paper-summary/church-history-1-march-1842/2
and this:
I obtained them [the plates], and the Urim and Thummim with them; by the means of which, I translated the plates; and thus came the book of Mormon.
https://www.josephsmithpapers.org/paper-summary/questions-and-answers-8-may-1838/2
and this:

"The boldness of my plans and measures, can readily be tested by the touch-stone of all schemes, systems, projects, and adventures,— truth, for truth is a matter of fact— and the fact is, that by the power of God I translated the book of Mormon from hierogliphics; the knowledge of which was lost to the world."

Instead of teaching members what Joseph actually said, the Ensign teaches this:

The seer stone, which Joseph also used to translate, was not buried with the plates.

Now you see the problem. The historians are stating as facts what some observers claimed, much of it hearsay.

It's very simple. Joseph Smith and Oliver Cowdery consistently and persistently taught that Joseph translated the plates with the Urim and Thummim that came with the plates. The Book of Mormon itself, as well as the Doctrine and Covenants, teach the same thing, as have the prophets starting with Joseph's contemporaries.

Other observers (and critics) claim that Joseph merely put a seer stone in a hat [SITH] and read words that appeared.

[I think the historical evidence shows that both groups were telling the truth about what they observed, but that SITH is the product of (i) hearsay and (ii) an incorrect inference made by the SITH observers.]

The two alternatives [SITH vs. the Urim and Thummim] were well known in 1834. They were spelled out in the book Mormonism Unvailed, a book critical of Joseph Smith. In response, Joseph and Oliver reaffirmed that Joseph translated with the Urim and Thummim.

But today, our intellectuals say Joseph and Oliver were wrong, or at least didn't tell the whole truth. They say Joseph used "both" the Urim and Thummim and the seer stone.

Here's how the Ensign article justifies this:

It [the seer stone] was something that Joseph had found on his own years earlier that helped him to feel in tune with spiritual revelation. So he used both.

We won't take the time here to assess the evidence for this claim, but everyone can read both Emma Smith's so-called "Last Testimony" and David Whitmers "Address" to see whether or not they are better sources than the teachings of the prophets.
Notice that their claims about SITH are relatively insignificant compared with their focus on other topics. The same LDS historians who cite Emma and David to support SITH insist Emma and David were completely wrong about the other things they discussed.
_____