We discuss the stone-in-the-hat (SITH) theory on this blog because it is so closely tied to M2C. The M2C scholars have apparently embraced SITH, with a few notable exceptions which we'll discuss eventually. 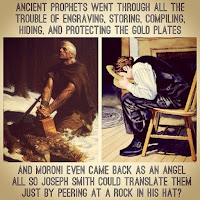 SITH has lots of problems because it contradicts what Joseph and Oliver taught, not to mention what the scriptures teach.

Today I'm posting some comments from a reader who posts comments on moronisamerica.com. That site compiles this and other blogs, but a lot of people read this blog directly here or on Amazon or other sites that republish it.

Here's the comment. He makes some points that a lot of people ask themselves about SITH.


Have you ever thought about how silly the seer stone in a hat really is? The idea that whole sentences appeared on the 3x4x5cm oval shaped opaque stone is totally wrong for many reasons.
The Book of Mormon didn’t have punctuation. It was added by the typesetter. Some say the average sentence length is about 25 words. That many words wouldn’t fit on a small object unless it was a size 1 font and that would be unreadable. It would also be very hard to read at the ends of the oval where it curves from the flatter part of the stone with the best chance for some kind of focal distance.
No special lighting was required to use the Urim and Thummim or Liahona (words would appear on spindle from time to time) or a modern-day teleprompter? Why would God provide an underpowered seer stone that couldn’t be read in normal lighting conditions?
The seer stone in a hat story is simply an attempt to discredit the truth and destroy Joseph Smith. Sadly, Intellectuals and scholars are trying to hijack church history.
Joseph’s history in the PGP uses the term Urim and Thummim 6 times–never the seer stone. With your head buried in a hat, the focal distance would be too close, out of focus, and unreadable! It would also be hard for the scribe to hear your muffled voice buried in a hat.
I’m sick of Sunday School teachers saying the seer stone in a hat is like your cell phone screen. You can’t read it very well in broad daylight. That is because your phone is designed for long battery life. If your phone had enough power you could read the screen on a sunny day. Also, Joseph was inside a house with small windows and low lighting conditions. Why would he bury his face in a hat with even less light?
Can you imagine how uncomfortable that would be to be bent over a hat with your voice muffled? It would be hard for the scribe to hear and for Joseph to breath.
Do you remember how Joseph described Moroni’s visit in the log home in 1823? He said the light around Moroni seemed brighter than farther away. Why would God give Joseph an underpowered teleprompter? Why put limits on God?
Why didn’t the Lord give the Brother of Jared a hat along with the 2 seer stones? Don’t be swayed by the foolish revisionist history and their bogus artwork depicting the FALSE seer stone in a hat translation method!
Eber D. Howe tried to sell that false notion in Mormonism Unvailed [sic] in 1834. David Whitmer tried to perpetuate the lie it in his 1887 tirade, AN ADDRESS TO ALL BELIEVERS IN CHRIST. David was a faithful witness for the Book of Mormon. However, he opposed Joseph on the Restoration of the Priesthood, Doctrine and Covenants, etc. and he started his own church. He is definitely not a creditable source for the translation method.
D&C 17:1 says the 3 Witness would be able to view the plates, breastplate, Urim and Thummin, Sword of Laban and the Liahona. No seer stone is mentioned.
Also remember that Hiram Page tried to lead the church astray with a seer stone in 1830 (D&C 28). Satan loves a counterfeit!
How many revelations were given in the Doctrine and Covenants via a seer stone? Zero. How many revelations were given via the Urim and Thummim? At least 8 sections (Sections 3, 6, 7, 11, 14, 15, 16, and 17).
Why would God preserve the Urim and Thummim and records for about 4,000 years if a seer stone was used? Mormon and Moroni spent many years abridging all the records. That would be a huge waste if the plates were not even used as many scholars now claim. The seer stone in a hat doesn’t pass the common sense test! Follow the prophets, not the intellectuals and scholars.
Posted by jonathan3d at 11:04 AM