There are new readers here all the time, so I want to clarify my positions.

People can believe whatever they want. That's fine with me. I hope it makes them happy and fulfilled, and I hope it's based on truth at some level, but everyone gets to make their own decisions, whether informed or not.

My main objective here is to help people avoid making decisions that are (i) uninformed or (ii) based on a false dilemma, which are similar but not exactly the same things.
_____

Does everyone have to believe the same thing? 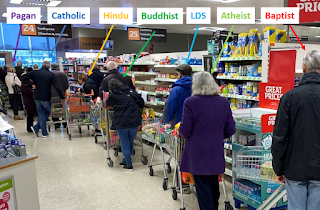 Of course not. We can get along in society just fine so long as we aren't obsessed with what everyone else believes about things that don't affect our public interaction.

This is also true of members of the Church. We can be fully engaged regardless of what we believe about Church history, Book of Mormon geography and historicity, etc. 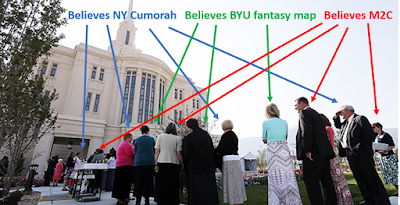 A year or two ago a well-known BYU professor, a former Mission and Temple President who is a staunch M2C believer, sent an email to his list claiming that I was lying to people. I found out because some of the people on his list were friends of mine who forwarded the email to me. I contacted this professor pointed out that, as brothers in the Gospel, if we have a problem we should discuss it between us. He apologized, sort of, but he didn't send out a retraction to his list.

At first I thought of "whited sepulchers," but then I realized that this brother was doing what he probably sincerely believed was the right thing. He was (and still is) deeply invested in M2C.

I welcome conversations with anyone who disagrees with me. I've never turned down an invitation to discuss these issues, but I've had others turn down my offers to discuss things. Which, of course, is their prerogative. The psychology of confirmation bias and cognitive dissonance makes it almost impossible for people to directly confront evidence that contradicts their views, and even less possible for people to change their minds.

Especially people who are deeply invested in their beliefs/biases.

It has little to do with facts and reasoning and everything to do with bias confirmation.
_____

I mention all of this for two reasons. One, I've been through the psychological process of change because for decades I accepted M2C.

Two, because as long as everyone has shared values about what's most important, we can have different beliefs with no problem.

This is what our M2C friends seem to not understand. I'm not trying to persuade anyone of anything. I don't care what anyone else believes. So long as they're happy and fulfilled, that's fine with me.

The reason I write these blogs is because so many people think that the only choice is between (i) accepting M2C and (ii) concluding that the Book of Mormon is fiction.

It's M2C or bust for many people.

It's difficult for people not to arrive at that false dilemma because the M2C citation cartel censors alternatives to M2C. They also repudiate the teachings of the prophets about the NY Cumorah. Lately, they've adopted SITH as the only "acceptable" belief. As well as JDT and MUST.

When people realize, as I did, that M2C is based on a mistake in Church history and a cascading series of logical and factual fallacies, justified by an interpretation of the text based on circular reasoning, they face the false dilemma of M2C or bust.

[The BYU fantasy map purports to avoid the false dilemma, but it not only reinforces the M2C false dilemma by imprinting the M2C interpretation on the minds of the students, but it also frames the Book of Mormon as fiction.]

The M2C citation cartel should make their readers aware that there are interpretations of the text and the relevant sciences that corroborate, instead of repudiate, the teachings of the prophets.

They continue to refuse to do so.

The actions of the M2C intellectuals don't matter to the rest of us who have rejected M2C in favor of the teachings of the prophets. So long as we all focus on what matters most, we can get along fine.

But we are concerned about the false dilemma presented by the M2C citation cartel. They have created, and continue to enforce, this false dilemma by censoring alternatives to M2C.

And we don't want people making uninformed decisions because of that censorship. Too many people lose their faith, or decline to investigate further, once they realize that M2C both repudiates the teachings of the prophets and is based on a hoax.

That said, we don't mind people believing M2C. We're happy with whatever decisions people make for their own lives.

Just stop framing it as the only legitimate belief in the Church.