I strongly support the idea of what FairMormon purports to be--a useful web-based resource for factual information and useful answers. FairMormon would be an awesome resource if it was actually fair.

Fairness includes transparency and openness to other faithful interpretations and perspectives.

But the organization instead is an advocate for specific intellectual fads and it uses anonymity to obfuscate its editorial objectives and provide plausible deniability to the scholars and others who provide content.

Yesterday FairMormon published a response to the publicity about the videos they released under their TITS (This Is the Show) brand. Yeah, they actually think that's a cool brand name. 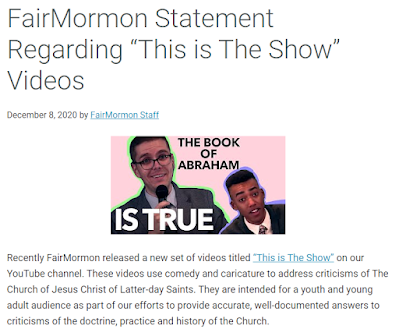 The first thing to notice is the author of this statement: "Fair Mormon Staff."
That's a meaningless attribution because FairMormon never reveals its staff. Anonymity and secrecy rule at FairMormon.
It makes sense, actually. FairMormon's promotion of M2C is based on anonymous articles in the 1842 Times and Seasons. Anonymity enables intellectuals to use all kinds of sophistry and logical fallacies to promote their teachings.
Look at what the "Fair Mormon Staff" says next:
First, some have claimed that other groups collaborated with FairMormon on these videos. This is false.  FairMormon commissioned the production of “This is The Show” videos without prompting, input, suggestion or direction from any other entity or individual. No other group has contributed to the content, style, performance, production, or distribution of our videos. FairMormon alone is responsible for the content shared on the videos, and our websites.
This is a patently absurd statement. FairMormon doesn't make any decisions or produce any content; everything is decided and produced by people. But FairMormon never reveals who these people are.
You can't blame them, I suppose; no sensible person wants to be affiliated with these videos. No donors want to fund them. Everyone seems to be running away from them.
Which is why FairMormon is opaque.
In a sense, it's smart to have an anonymous organization that can experiment with new ideas and tactics. But it shouldn't be FairMormon because FairMormon is an anonymous facade for the entire M2C citation cartel. The interlocking M2C organizations share employees, advisers and contributors, and they coordinate messages and marketing tactics.
When the lines between these organizations are as blurred as they are, they're all responsible for one another.
When you go to FairMormon's "about" page, here's what you see: no names. No list of contributors, no list of editors--nothing except vague references to the rest of the M2C citation cartel:
FairMormon is staffed completely by volunteers who are students of the scriptures, ancient languages, early Christian history, early LDS history, and LDS doctrine and apologetics. Most all of the staff here at FairMormon have been involved in online services and Internet-based LDS apologetics for many years. Many of our members are authors of currently-available apologetic publications.
FairMormon does reveal who its "friends" are: 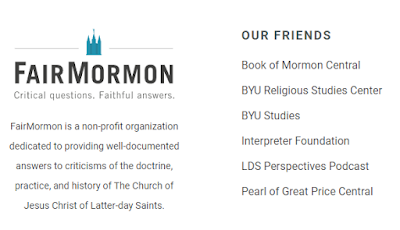 Every "friend" on that list promotes M2C (although the BYU Religious Studies Center is less blatant about it than the others). Most also promote SITH. They all elevate intellectuals above prophets.
These "friends" use separate organizations to provide an illusion of diversity, but they share uniform editorial views, cite one another (hence the citation cartel), promote one another's material, and coordinate their efforts. For example, the former editor of BYU Studies is the founder of Book of Mormon Central and founder of FARMS. The editor of the FARMS journals started the Interpreter when he was fired from FARMS. Pearl of Great Price Central is a component of Book of Mormon Central, and so on.
_____
Next, look at this explanation.
The overwhelming bulk of our work is set forward in well-documented articles and lectures. “This is The Show” video series isn’t a change in our course, It’s our first attempt to support young people—using means, methods, and media commonly familiar to them—in their efforts to understand and defend sincere and insincere questions or attacks on their faith and beliefs.
Their work is documented in the sense that they provide citations and links, but they don't disclose authors and they carefully edit material to present their editorial perspective instead of providing complete information.
It's a great idea to support young people, no doubt. But young people (as well as older people) seek transparency and honesty.
That's why so many prefer the calm, respectful approach of certain critics as opposed to the counterproductive tactics of ridicule, parody and sarcasm so typical of this strain of LDS apologetics.
I'm still hopeful that FairMormon can reform itself and become more transparent, open, honest and fair. I've been hoping that for several years. Maybe the controversy over the videos will prompt a change. If so, I'll be among the first to welcome and applaud it.