Some readers here know I'm releasing a book about LDS apologetics next year, based on my experience over the last few years. In my view, spending millions of dollars to persuade people that Joseph Smith and Oliver Cowdery were wrong about the New York Cumorah and the translation of the Book of Mormon is worse than a waste of money.

If some intellectuals refuse to accept what Joseph and Oliver taught, that's fine. People can believe whatever they want. But they should at least consider their teachings one of multiple working hypotheses.

People deserve to make informed decisions with good information. But the M2C citation cartel disagrees. They insist their M2C and SITH theories are the only acceptable beliefs, and they spend millions of dollars to censor and attack those of us who still believe what Joseph and Oliver taught.

My basic life philosophy is that eventually the right thing happens.

Maybe we've reached that stage where the right thing will finally happen with LDS apologetics. I'm all in favor of teaching and defending truth, and to the extent scholars do that, great. But that's not what the latest news is dealing with.

People are asking about the latest developments with the M2C citation cartel (FairMormon, the Interpreter, Book of Mormon Central, BYU Studies, Meridian Magazine, etc.). Here are my opinions.

Overall, for the most part, LDS apologists are sincere, smart, and well-meaning. However, their work is mainly bias confirmation, so not very persuasive, especially regarding M2C and SITH, which makes many of them highly defensive and thin-skinned.

Some are fine young scholars trying to make their mark in the world. Nothing unusual about that; inexperienced students usually think their newfound education makes them smarter than those who disagree with them. LDS apologetics has a long history of engaging in logical fallacies, ad hominem attacks, snide cynicism, etc., and the fine young scholars have continued that tradition. 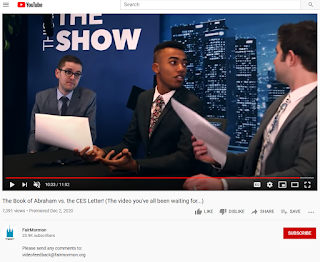 Lately, FairMormon released youtube videos including some of the fine young M2C scholars that focused on the CES Letter and related topics. While I don't recommend videos from the M2C citation cartel because of their editorial bias, you should go to their youtube channel and see for yourself. https://www.youtube.com/channel/UCoLAowawEfrtrxvnQQAx2yw

The videos are apparently supposed to be funny and entertaining, an attempt to reach younger people than FairMormon's articles do.

The M2C citation cartel constantly asks Church members for donations. These FairMormon videos should finally wake people up to see how their money is being spent because they contain the same type of editorial content and style of apologetics as FairMormon always has, a legacy of FARMS.

In addition to their juvenile sarcasm and parody, the videos include some depictions of violence that led to a response from MormonStories, which posted a podcast on the topic.

Both FairMormon and MormonStories teach people to reject the teachings of the prophets; they just differ about what to reject and how to frame the rejection. In that sense, they suit each other.

Overall, for the most part, MormonStories and other such groups are sincere, smart, and well-meaning. However, their work is mainly bias confirmation, so not very persuasive, especially regarding the straw man arguments they create and attack, which makes many of them highly defensive and thin-skinned.
In that sense, the apologists and their opponents also suit each other. 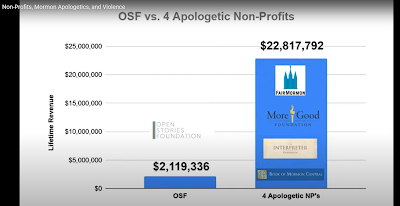 MormonStories has raised objections to LDS apologetics several times in the past over the long-term practice by LDS apologists of using ad hominem attacks, sarcasm, logical and factual fallacies, etc. Much of this is a good point, because the M2C citation cartel's arguments are not exactly coherent or persuasive.

This MormonStories podcast focused in part on fundraising by FairMormon, the More Good Foundation, the Interpreter Foundation, and Book of Mormon Central.

That's a good defense, I suppose, and it acknowledges the coordination among the M2C citation cartel. But it skirts the main issue of who is encouraging the fine young scholars to engage in the counterproductive apologetics. Which leads to a related development.

Recently the Salt Lake Tribune published an article about a "radical orthodoxy manifesto."

The manifesto, deliberately vague, reads as a virtue-signaling effort to mainstream M2C, SITH, and whatever the latest intellectual fads are. They promote these ideas and frame them as the center between two unacceptable right/left camps.

The signatories include the usual suspects, including some of the fine young scholars and their mentors who engage in the counterproductive apologetics:

Notice: I have not used any names in this post. But you'll see my critics will complain about me by name, as they always do, because they are well-trained by their mentors in using such logical fallacies.

Overall, these developments look promising. The reckoning for poor and counterproductive LDS apologetics is long overdue.

Maybe the M2C citation cartel will look in the mirror and come to realize that trying to persuade the world that Joseph and Oliver were wrong is not such a good idea after all.

But if past is prologue, we'll see our M2C and SITH scholars continue to double-down, lash out, and strive all the harder to confirm their biases.

Counterproductive apologetics is a major contributing factor for people leaving the Church and rejecting the missionaries. The latest crop of fine young scholars is making that problem worse, and the M2C citation cartel gives them a forum (and employment) to continue doing it. The "elder statesmen" in the M2C citation cartel could stop it overnight, but they won't because they've been doing the same things for decades, albeit without social media. You can go through the archives at Book of Mormon Central and find lots of examples, most of it in an effort to defend M2C.

Recently, the Ensign published an article that could/should have been a sign of better things to come in apologetics.

Considering the author, the article comes across as "lessons I've learned from doing what I'm telling people not to do." Except he continues to do the same things he has done for years.

Look at these FairMormon videos and ask, is your money well spent? Do these people represent you? 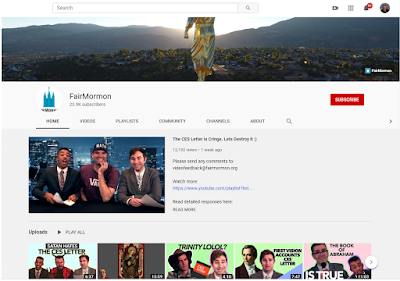 Look at these videos from the M2C citation cartel and see how deeply M2C is infused in their content. 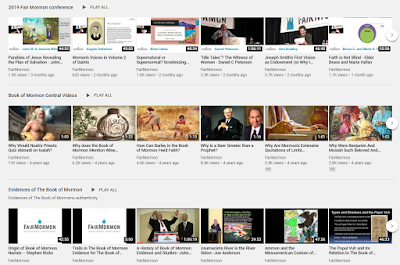