A Man that Can Translate: Joseph Smith and the Nephite Interpreters

Readers here know I've blogged a bit about the translation of the Book of Mormon. This is a critical issue that people continue to debate, although many LDS scholars claim the debate is over.

Two alternative explanations were set forth in the 1834 book Mormonism Unvailed: Joseph produced the Book of Mormon with either

(i) the Urim and Thummim (U&T), or Nephite translators, that Moroni put in his stone box on the Hill Cumorah, as described in the text itself;

(ii) the "peep" stone, or seer stone, that Joseph put into a hat before covering his face with the hat to read the words that appeared. I refer to this as SITH for "stone-in-the-hat" theory.

Some say it doesn't matter how Joseph produced the Book of Mormon, whether because they think it's true or they think it's false. That's fine with me; people can believe whatever they want, and most people seek only to confirm their biases either way.

Those aren't the people I write this blog for.

If Joseph actually translated engravings that were recorded on ancient plates, that demonstrates the divine authenticity of the record. If Joseph merely "read" words that "appeared" on a stone in a hat, or recited words he saw in a vision while staring at such a stone, it is more difficult to see that as a demonstration of the divine authenticity of the record. It's no wonder that from the outset, critics promoted SITH. As an impediment to acceptance of the Book of Mormon, what is more effective than SITH?

However, in recent years, many LDS scholars (including the M2C citation cartel) have agreed with nonbelievers that SITH is correct. They now teach it as a fact. Book of Mormon Central spends millions of dollars to promote this and related ideas.

These scholars believe they are "inoculating" the youth in the Church and new converts by teaching SITH.

Inoculation is a great idea--unless it's really infection.

Years ago I had a friend who suffered from the effects of a childhood polio vaccine. The manufacturer had released over 100,000 doses in which the virus had not been properly inactivated; people who received those doses received active virus. They were infected, not inoculated.

I think teaching SITH infects people with a false narrative. It's great for people to learn about the witness statements regarding SITH, but they should also learn what Joseph and Oliver taught. Even better, they should learn how the historical facts support an explanation that reconciles what appears on the surface to be conflicting evidence.

However, our LDS scholars are only "reconciling" the evidence by claiming that Joseph and Oliver, as well as their successors as Church leaders, misled the Church. These scholars say the term "Urim and Thummim" really meant the seer stone, contrary to the historical evidence. They are teaching that Joseph never even used the plates, never used the Nephite interpreters, didn't really translate anything, etc.

The situation is so dire that even the Gospel Topics Essay on Translation teaches SITH without once quoting what Joseph and Oliver said about the U&T.

Consequently, the narrative promoted by opponents of Joseph Smith to destroy the Restoration has become the prevailing narrative. By now, we all see how that is playing out in terms of the widespread faith crises. 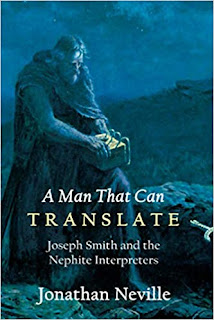 Seeing a need for a detailed, historically documented explanation that supports what Joseph and Oliver taught, while also reconciling the statements from other witnesses, I wrote a A Man that Can Translate. I'll summarize it below.
I don't expect our LDS scholars, or critics who reject the Book of Mormon, to agree with my interpretation. Both groups have huge investments of time, reputation, and money in their respective positions. They focus on confirming their biases, not on considering alternative perspectives.

Book of Mormon Central, the most prominent and best-funded member of the citation cartel, identifies itself by a logo that forecloses consideration of alternative perspectives.

I wrote this book mainly for myself, to better understand the historical evidence. When I practiced law, I found that in many cases, the "truth" emerged from a reconciliation of multiple perspectives.

In every case, I would sit and watch the opposition present its case and, while seeing how the facts in evidence might support that version of the truth, I also knew there was an entirely different explanation of those same facts that I was about to present. Sometimes, both as a prosecutor and as a criminal defense lawyer, I knew facts I could not even present for various reasons.

I see the same process taking place when I do historical research. People take a position and then find evidence to support that position. They also seek evidence to discredit someone else's position. People end up believing whatever they wanted to believe in the first place.

An exception is when someone's beliefs are based on incomplete facts. In that situation, people are not making informed decisions.

This is why I mention Book of Mormon Central so often. Their approach is the antithesis of helping people make informed decisions because they censor alternative perspectives and insist people adhere to their editorial positions, buttressed by other members of their citation cartel to convey an impression of diversity and scholarship.

As a result of my research, I think both LDS scholars and critics are not making informed decisions.

They'll undoubtedly disagree; scholars and critics always want to self-identify as "open-minded" and truth seekers who consider all the evidence. But they're people, subject to bias confirmation, cognitive dissonance, and logical fallacies. As am I, which is why I welcome input if there is any evidence I've overlooked.

We published the book for those who are interested and willing to take a new look at the evidence.

Hopefully, some people will find it useful.

There is historical evidence in the form of witness statements to support both theories. They can be summarized this way:

(i) Joseph Smith and Oliver Cowdery always said Joseph translated the plates with the Urim and Thummim by the gift and power of God. A few others corroborated that claim. The first published declaration came in response to Mormonism Unvailed, when Oliver Cowdery declared,

"Day after day I continued, uninterrupted, to write from his mouth, as he translated with the Urim and Thummim, or, as the Nephites would have said, ‘Interpreters,’ the history or record called ‘The Book of Mormon.’" (Joseph Smith—History, Note, 1)

Joseph's contemporaries and successors in Church leadership always reaffirmed what Joseph and Oliver taught; i.e., that Joseph translated the plates with the Urim and Thummim, or Nephite translators, that came with the plates.

(ii) Other people claimed that Joseph used SITH. Some claimed they were present during the event, others related what they'd heard or understood. Wikipedia collected some of these statements, here:

_____
In A Man that Can Translate, I assess the statements and propose the following reconciliation.
Joseph and Oliver were absolutely correct and honest when they said Joseph translated the engravings on the plates by means of the Urim and Thummim and by the gift and power of God. Joseph did not translate any of it with the seer stone.
The translation process was difficult and time-consuming. At the Whitmer farm, Joseph translated from sunrise to sunset, 14-hour days. (In the book I explain why I think Emma and other pre-Oliver scribes recorded most or all of Mosiah, which expands the time for translation in Harmony consistent with the laborious effort in Fayette.)

However, Joseph did conduct one or more demonstrations using the seer stone. Joseph faced a dilemma: Under commandment to not show the U&T or the plates to anyone unless specifically authorized (for good reason), Joseph also had family members and supporters wanting to know how he was translating. The curiosity was interfering with the actual translation. People were familiar with the idea of seer stones in hats, so he did the demonstration. Witnesses and hearsay took it from there, even though Joseph and Oliver always specified Joseph translated with the U&T.

Mormonism Unvailed, which set forth the competing explanations, also set forth the Solomon Spalding theory, which claimed the Book of Mormon was copied from a novel by Spalding, adapted by Sidney Rigdon, who added Christian sermons and rhetoric. The Spalding theory became the predominant explanation for the Book of Mormon outside of the Church in the 1800s, widely reported in newspapers, by ministers, etc.

An interesting detail from the demonstration account is that Joseph had multiple scribes present so they could take over when one got tired. That indicates a rapid dictation--much different from the laborious effort in Harmony and upstairs in Fayette. This detail also tells us that the demonstration had to involve Second Nephi (partly because Emma was one of the scribes at the demonstration and she did not write any of First Nephi). For the reasons explained in the book, I think Joseph used the demonstration to dictate some of the Isaiah chapters in Second Nephi from memory. That's why these chapters have otherwise inexplicable minor differences from the King James version, etc.

This is merely an overview; you can get the details in the book, supported by hundreds of footnotes.

Next week we'll discuss my two other new books.