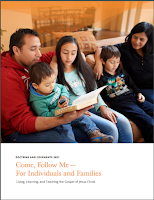 I'm all in favor of the ongoing restoration. We have more access to more historical documents and information than ever before. Some of us think this expansion of information further corroborates what Joseph and Oliver said about their experiences.

But we also have more aggressive revisionist historians and scholars who continue to promote their personal theories. In some cases, these theories repudiate what Joseph and Oliver taught. We see a lot of the philosophies of men, not even mingled with scripture.

The de-correlation of Cumorah and the Urim and Thummim is evident in the Saints book, but also in the Come Follow Me manual. We can observe this ongoing de-correlation by comparing with a lesson manual from the year 2000.

Instead, we get this revisionist history:

We don’t know many details about the miraculous translation process, but we do know that Joseph Smith was a seer, aided by instruments that God had prepared: two transparent stones called the Urim and Thummim and another stone called a seer stone. 3

There are no explanations from Joseph or Oliver about how God supposedly prepared the seer stone that Joseph found when he was digging a well. We wouldn't expect them to, actually, because neither of them said anything about Joseph translating the plates with that seer stone.

That doesn't matter to our revisionist Church historians. Note 3 in the lesson refers back to the Gospel Topics Essay on Book of Mormon Translation, which also doesn't quote what Joseph and Oliver taught. Instead, it quotes the speculations of scholars.

Here is the link to the Come Follow Me manual:

Readers here know that I think Joseph used the seer stone during a demonstration, as I've explained in detail in A Man that Can Translate. I have no problem with alternative explanations; people can believe whatever they want. However, I think it's counterproductive to simply replace what Joseph and Oliver said with the speculations of scholars. 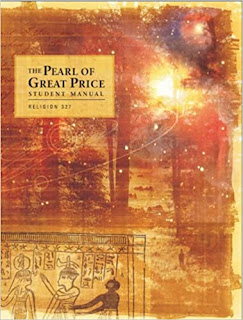 The 2000 Pearl of Great Price student manual refers to the Hill Cumorah. Here's the link:

Below are two example explanations from the 2000 manual that no young (or new) Latter-day Saints will ever learn.

The manual even included a photo of the Hill Cumorah in New York.

And, the manual quoted from Oliver Cowdery's Letter VIII.

Before looking at the examples, keep in mind that President Nelson has taught, “Good information leads to good inspiration.” Now, let's consider how new and young Latter-day Saints can't make informed decisions because, with Cumorah and the Urim and Thummim being de-correlated, they learn about these important details only if

(ii) they learn what Joseph and Oliver taught by reading/watching the presentations from critics of the Church.

I keep hearing that the revisionist Church historians and the M2C proponents think their efforts will "inoculate" young and new members against the risk of exposure to the "real history."

That excuse strikes me as exactly wrong. The revisionist history and M2C theories are infections, not inoculations. What sense does it make to de-correlate (censor) the New York Cumorah and the translation with the Urim and Thummim? De-correlating these historical records does not make them go away. The "inoculation" effort just aids and abets the critics who claim the Church has hidden the history. They make a good point--except now it's the teachings of Joseph and Oliver that are hidden from the lesson manuals.

I realize that the power of bias confirmation will never allow the intellectuals at Book of Mormon Central, the Interpreter, BYU Studies, etc., to change their approach. They will continue to censor and attack those of us who still believe what Joseph and Oliver taught.

But no one has an obligation to accept the teachings of the scholars. And to be clear, I'm fine with people believing whatever they want. However, I'm not fine with these intellectuals using their positions of influence to censor alternative faithful explanations.

Despite the efforts of these intellectuals, we can make our own informed decisions if we follow the teachings of the prophets and "seek ye out of the best books words of wisdom; seek learning, even by study and also by faith." (Doctrine and Covenants 88:118)

Fortunately, more and more Latter-day Saints are discovering that what Joseph and Oliver taught makes more sense than what our intellectuals have come up with.

“As Joseph approached the Hill Cumorah, he had thoughts about the poverty of his family and the possibility that the plates or the popularity of the translation would produce enough wealth to ‘raise him above a level with the common earthly fortunes of his fellow men, and relieve his family from want’ [Oliver Cowdery, in Messenger and Advocate, July 1835, 157]. When he reached down for the plates he received a shock and was thus prevented from taking them out of the box. Twice more he tried and was thrown back. In frustration he cried out, ‘Why can I not obtain this book?’ Moroni appeared and told him it was because he had not kept the commandments but had yielded to the temptations of Satan to obtain the plates for riches instead of having his eye single to the glory of God as he had been commanded [Cowdery, in Messenger and Advocate, Oct. 1835, 198].

The manual included another important piece of history that young and new Latter-day Saints never learn today. I included a link to the Joseph Smith Papers so you can see the reference in the original.

“Little is known of Joseph’s visits with Moroni between 1824 and 1827, but sometime before fall of 1827, Joseph returned home one evening later than usual. His family was concerned, but he told them he had been delayed because he had just received a severe chastisement from Moroni. He said that as he passed by the Hill Cumorah, ‘The angel met me and said that I had not been engaged enough in the work of the Lord; that the time had come for the record to be brought forth; and that I must be up and doing and set myself about the things which God had commanded me to do’ [Smith, History of Joseph Smith, 100]. [ https://www.josephsmithpapers.org/paper-summary/lucy-mack-smith-history-1845/111]

“Much must have transpired in Joseph’s four years of preparation. He passed through his teens largely untainted by the precepts of men. He enjoyed the emotional support of his family, and he took on the responsibilities associated with marriage. Angels prepared him to translate a divinely inspired record and taught him the necessity of self-discipline and obedience. He was undoubtedly anxious to begin translating the Book of Mormon. At this time Joseph Knight and Josiah Stowell were in Manchester visiting with the Smith family. This might have been in anticipation of Joseph’s receiving the plates.

“Long before sunrise on 22 September 1827, Joseph and his wife hitched Joseph Knight’s horse to Josiah Stowell’s spring wagon and drove the three miles to the Hill Cumorah. Leaving Emma at the base, Joseph climbed the hill for his final interview with Moroni. Moroni gave him the plates, the Urim and Thummim, and the breastplate. He also gave Joseph a specific warning and promise concerning his responsibilities. Joseph was now responsible for these sacred objects, and if he was careless or negligent and lost them he would be cut off. On the other hand, if he used all his efforts to preserve them until Moroni returned for them, he was assured that they would be protected (see Joseph Smith—History 1:59).

The 2000 lesson manual accurately reported what was in the stone box.

In the stone box were a book and the Urim and Thummim. The book was written on gold plates and included the book of Lehi, the small plates of Nephi, the plates of Mormon, and the sealed plates that Joseph was commanded not to translate (see “A Brief Explanation about the Book of Mormon” in the introductory pages of the Book of Mormon). The Urim and Thummim was a divine instrument prepared by the Lord for the purpose of translation. It consisted of two stones in silver bows and a breastplate onto which it was attached.

2000 lesson manual: The Urim and Thummim was a divine instrument prepared by the Lord for the purpose of translation.

2021 Come Follow Me manual: Joseph Smith was a seer, aided by instruments that God had prepared: two transparent stones called the Urim and Thummim and another stone called a seer stone.

Our revisionist historians have added the seer stone based on statements made by David Whitmer (who was never a scribe) and the so-called "Last Testimony of Emma Smith," which was recorded by her son two months before her death, first published six months after her death, and never acknowledged by Emma herself. Emma's contemporaries and associates in Utah said the "Last Testimony" was a lie and fabrication, but our historians today claim it was the truth and outweighs what Joseph and Oliver taught.

Notice that the stone box contained the plates and the Urim and Thummim (and the breastplate). Anyone who has visited the M2C exhibit in the north Visitors Center on Temple Square (or the replica at the Hill Cumorah Visitors Center in New York) has seen the depiction of Moroni putting the plates in the stone box, along with the sword of Laban and the Liahona. Of course, there are no historical accounts that support this; it is a product of M2C, which insists the "real Cumorah" is in Mexico, so Moroni must have carried the other artifacts to New York.