Fun with the Three Witnesses 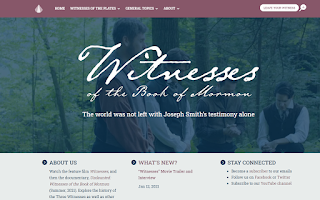 There is a new web page about the witnesses of the Book of Mormon (meaning the Three and Eight Witnesses, plus a few others who saw or handled the plates).

It's a slick page, well organized and presented. It has potential to be a helpful resource. We all want more accessible information that will help us understand and appreciate Church history and doctrine. Well done. Except...

Look who created and contributed to the website--the usual suspects, our M2C/SITH* scholars at the Interpreter, FairMormon, and Book of Mormon Central.

This means the new web page will not help people make informed decisions.

Instead, the creators will omit historical evidence that contradicts, or merely challenges, M2C and SITH. It's another example of the M2C citation cartel generating a new facade to convey the appearance of consensus.

This new web page is another storefront in the Potemkin village of the Interpreter, FairMormon, Book of Mormon Central, Evidence Central, Meridian Magazine, BYU Studies, BMAF, etc. It's all the same people behind the scenes. Somehow, they seem to actually believe that if they put up enough different-looking store fronts, they can convince Church members to accept M2C and SITH.

Of course, their obstacle is the clear, concise and unambiguous teachings of Joseph Smith and Oliver Cowdery. Despite the efforts of these scholars, there are still many Church members who believe the prophets instead of scholars, no matter how many ways these scholars dress up M2C and SITH.

As John Sorenson, author of Mormon's Codex put it, "There remain Latter-day Saints who insist that the final destruction of the Nephites took place in New York, but any such idea is manifestly absurd." Mormon's Codex, p. 688.

But the scholars disagree. They curate (censor) Church history so that Latter-day Saints never see the historical sources that contradict M2C and SITH. And this latest web page is more of the same.

The new page was developed to correlate with the Interpreter's movie about the witnesses, to be released this summer.

Of all the possible filmmakers, could there be any group worse than the Interpreter Foundation to make this film?

And yet they expect people to believe their selective quotations because...

because they said so.

Which is the same reason they think everyone should accept their M2C and SITH theories.

The great irony is that by repudiating the teachings about the New York Cumorah and the translation with the Urim and Thummim, these scholars undermine both their own credibility and the credibility of the witnesses whose testimony they purport to share with the world.

The M2C/SITH scholars want us to believe some, but not all, of what these witnesses said. They assume the authority--conferred by their academic credentials, apparently--to censor statements from these witnesses that they don't agree with. That censorship is exactly what so many members, former members, and potential members object to.

The M2C/SITH scholars, blinded by their bias confirmation, don't seem to realize that everyone has access to the same information. Dan Vogel, CES Letter, MormonStories--they all have read and discussed the same sources that are found on https://witnessesofthebookofmormon.org/. Except the critics don't censor the historical sources. They put out everything and let people decide.

If our LDS scholars were no so focused on confirming their own biases, they would do the same. But they won't, because they have convinced themselves that M2C and SITH are the only faithful narratives allowed, and they can't jeopardize their theories by letting members of the Church make informed decisions.

In this case, the approach of the M2C/SITH scholars deprives members of the Church of some of the strongest evidence of the divine authenticity of the Book of Mormon.

It's true that the witnesses were consistent. Throughout their lives, they stuck with the general outline of the official, published accounts of their experiences, contained in every copy of the Book of Mormon. It's also true that they offered variations on those accounts. There is plenty of evidence to either believe or disbelieve them, whichever way you want to go.

But apart from the specific events related in the formal testimonies of the Three and Eight Witnesses, and apart from the experiences of Mary Whitmer, Lucy Mack Smith, Emma Smith, William Smith and others, there is another important category of evidence that our M2C/SITH scholars won't accept.

The repository of Nephite records in the New York Cumorah.

David Whitmer, Brigham Young, Heber C. Kimball, Wilford Woodruff and others said that Oliver Cowdery told them about the repository of Nephite records in the Hill Cumorah in New York. Brigham Young, fearing this knowledge would be lost among the Latter-day Saints, brought it up in one of his last sermons, delivered just two months before he died.

His fears have been realized because our M2C/SITH scholars have successfully purged the accounts from Church curriculum, media, visitors centers, etc. They know that if Cumorah is actually in New York, as the prophets taught for nearly 200 years, then that destroys their claim that the "real" Cumorah is in southern Mexico. (The New York Cumorah says nothing about other geographical settings, of course.)

You can read some of these accounts here:

David Whitmer explained that the messenger who picked up the abridged plates from Joseph Smith in Harmony took those plates to Cumorah. You can read about that here:

When asked about it, David explained that the records were no longer in Cumorah, but were not far from there.

Understanding that the repository of Nephite records was in New York, and that, as Moroni told Joseph Smith, the record had been "written and deposited not far from" Joseph's home near Palmyra, is powerful evidence of the historicity of the Book of Mormon.

Instead, we are dealing with a known, physical location, identified first by Moroni, then confirmed by Joseph and Oliver, and reiterated by numerous prophets and apostles.

For those willing to accept these teachings, this is powerful additional evidence of the divine authenticity of the Book of Mormon.

But you won't find it on https://witnessesofthebookofmormon.org/

If you look into the details of the web page, you'll find some of the apologetic arguments typical of the M2C/SITH scholars. They are riddled with logical fallacies.

For example, look at this FAQ on David Whitmer. Notice how our scholars use scare quotes to frame David as claiming a false revelation because he didn't report hearing the voice until six weeks after the fact.

Whitmer’s excommunication occurred on 13 April 1838.[5] Whitmer refused to appear at the council meeting that severed him from the Church; he wrote:

to spare you any further trouble I hereby withdraw from your fellowship and communion—choosing to seek a place among the meek and humble, where the revelations of heaven will be observed and the rights of men regarded.[6]

Whitmer here says that he will withdraw from the Church—this would have been an excellent opportunity for him to invoke a “revelation” telling him to leave the Church, but he did not. This is not surprising, since he does not report hearing the voice until June, at least six weeks later.

Our scholars think a six week delay is determinative, yet these same scholars insist David was absolutely correct about SITH (Joseph translating with the seer stone in the hat) even though he didn't report it for decades after the fact.

This is the type of subjective assessment of historical facts that makes their arguments unpersuasive.

I don't think David's six-week delay in invoking a revelation is a material delay; he probably felt inspired to leave the Church before he left the Church.

For example, I accept David's claim that he actually observed Joseph using a stone in a hat, but he inferred it was an actual translation instead of a demonstration by Joseph about how the translation worked. The best Joseph could do, without displaying the Urim and Thummim or the plates, was to use a stone in a hat convey the idea.

Lately we've seen references in the Ensign and elsewhere to David's pamphlet, An Address to All Believers in Christ. The pamphlet is cited to support SITH because David describes what he observed. Yet the same pamphlet is primarily a denunciation of Joseph Smith. While I think David probably honestly thought Joseph had exceeded his original mandate, etc., does it make sense to provide selective quotations to support SITH while ignoring the bulk of what David wrote?

In my view, none of David's subjective interpretations have any bearing on David's veracity about what he actually observed as one of the Three Witnesses, about the messenger carrying the abridged plates to Cumorah, about Oliver telling him about the repository, etc. But if we're going to direct faithful Latter-day Saints to sources such as An Address to All Believers in Christ, we ought to at least provide context and consistent explanations.

There are other examples in this web page (and throughout the writings of our M2C/SITH citation cartel), but the main point here is that, once again, our scholars are causing confusion for people, whether Church members or not, by censoring historical evidence that contradicts their theories.

Let's hope they decide to use this otherwise awesome and promising web page to provide a resource containing all the statements of the witnesses--even if the witnesses contradicted the pet theories of the scholars.