When you first heard about Evidence Central, you probably had a positive reaction, as I did. Doesn't it seem like a good idea to gather and organize evidence that supports the reality of the restoration of the Gospel?

It could be very helpful to have these evidences in one easily accessible place. Such a collection could help people everywhere make informed decisions.

Maybe you've seen ad such as these:

Then, at the bottom of the page, we see the mark of M2C and we realize something's up.

Sure enough, Evidence Central is yet another vehicle to promote the theories of the M2C citation cartel.

A moment's reflection may remind us that the first principle of the gospel is faith, specifically faith in the Lord Jesus Christ. Next is repentance, baptism, and the gift of the Holy Ghost.

People can believe whatever they want, but it does no one any good to simply censor the teachings of the prophets while promoting scholarly theories as "evidence."

The scriptures do mention evidence a few times. For example, Helaman 5:50 explains,

"And it came to pass that they did go forth, and did minister unto the people, declaring throughout all the regions round about all the things which they had heard and seen, insomuch that the more part of the Lamanites were convinced of them, because of the greatness of the evidences which they had received."

But what evidences had they received? Was it a scholarly article? An elaborate explanation? A consensus about a theory?
Hardly.
The scripture explains that "they saw the heavens open; and angels came down out of heaven and ministered unto them." (Helaman 5:48)
That is great evidence. Such personal experience leads to the type of evidence that converts souls. It is experiential, akin to the evidence that Alma cited: "And now, behold, because ye have tried the experiment, and planted the seed, and it swelleth and sprouteth, and beginneth to grow, ye must needs know that the seed is good." (Alma 32:33)
The Savior taught this principle more concisely. "Then said Jesus to those Jews which believed on him, If ye continue in my word, then are ye my disciples indeed; And ye shall know the truth, and the truth shall make you free." (John 8:31–32)
But this is not the type of evidence that Evidence Central offers.
Instead, we have a restatement of scholarly theories and interpretations, focused on promoting the Mesoamerican/two-Cumorahs theory and the stone-in-the-hat (SITH) theory, both of which directly contradict what Joseph and Oliver taught.
Evidence Central is an elaborate effort to indoctrinate Latter-day Saints to accept the theories of scholars, while rejecting the teachings of the prophets on these topics.
_____
The section on the witnesses, for example, makes a good case for the credibility of the three witnesses, yet informed readers will recognize how Evidence Central avoids the incongruity of simultaneously repudiating what those witnesses taught about the New York Cumorah.
https://evidencecentral.org/evidence-type-1/witnesses
When Oliver Cowdery declared it was a fact that the Hill Cumorah of Mormon 6:6 is in New York, he spoke from personal experience, having visited the repository of Nephite records in that hill.
That is experiential evidence, the type the scriptures discuss, but Evidence Central not only ignores that evidence, it directly contradicts it.
_____
The section on the translation never once quotes the scriptures or the explicit teachings of Joseph Smith and Oliver Cowdery about how Joseph translated the engravings on the plates with the Urim and Thummim. Instead, it relates accounts claiming that Joseph never used the plates but instead dictated the entire text we have today by putting a stone in a hat and reading the words that appeared.
https://evidencecentral.org/evidence/translation-requirements
This scholarly approach of rejecting what Joseph and Oliver explicitly taught in favor of the philosophies of men is fodder for critics such as the CES Letter and Mormon Stories.
Readers here know that I reconcile the apparent conflict between SITH and U&T not by rejecting one or the others (because both are supported by historical evidence), but instead by concluding that Joseph used the U&T to translate and SITH to demonstrate the process.
People can believe whatever they want. But people ought to be able to make informed decisions, and Evidence Central simply ignores the teachings of the prophets that contradict the scholarly theories. That type of censorship doesn't help anyone make informed decisions.
_____
The section on ancient literary features emphasizes the Mayan nature of the text.
https://evidencecentral.org/evidence/calendrical-patterns 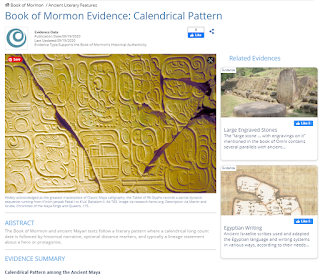 See what other examples you can find.
_____
Overall, Evidence Central is another huge disappointment. Like Book of Mormon Central, Evidence Central has a tremendous opportunity to help people make informed decisions. They spend millions of dollars a year developing materials and promoting themselves on the Internet.
Sadly, they continue to promote their own scholarly theories while also censoring the teachings of the prophets. They continue to censor alternative faithful explanations and interpretations. While this may confirm the biases of M2C and SITH believers, this approach helps the critics of the Book of Mormon.
The course Evidence Central is pursuing will continue to cause members of the Church to become confused and disturbed in their faith in the Book of Mormon, as Joseph Fielding Smith explained almost 100 years ago.
Posted by jonathan3d at 6:54 AM