The Worlds of Joseph Smith updated 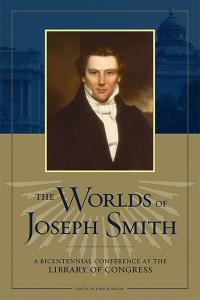 Six years ago today I posted comments about The Worlds of Joseph Smith on one of my old blogs. This was an important conference held at the Library of Congress in 2005. Leading scholars, LDS and non-LDS, presented Joseph Smith to the world.

Not surprisingly, given the organizers and participants, they portrayed the Book of Mormon as a Mesoamerican document, thereby framing Joseph Smith and his associates as ignorant speculators who misled the Church, and the world as a whole, about such teachings as (i) Cumorah is in New York, (ii) the Indians of this country are Lamanites, and (iii) the midwestern United States are the "plains of the Nephites."

In the ensuing six years, there have been hundreds of thousands of page views of my blogs, so for all those new readers, I'm updating and reposting that piece today.

The Worlds of Joseph Smith

In 2005, BYU Studies published The Worlds of Joseph Smith: A Bicentennial Conference at the Library of Congress. [All page references here are to BYU Studies Vol. 44, No. 4 2005.]
There are some excellent articles, of course, but there is also one by John E. Clark titled "Archaeological Trends and the Book of Mormon" that I want to review here. Brother Clark is one of the principal promoters and defenders of M2C, along with the usual suspects (Welch, Peterson, Sorenson, et al.), all of whom are fine scholars, exemplary people, etc.
https://byustudies.byu.edu/article/archaeological-trends-and-the-book-of-mormon-origins/#footnote-036-backlink
Also archived with the M2C logo here: https://archive.bookofmormoncentral.org/content/archaeological-trends-and-book-mormon-origins

Before doing so, I point out the volume contains a "Gallery Display" of items that were "mounted in the foyer and display cases of the Coolidge Auditorium by the Library's Exhibition Office." p. 119. Here are some of the items on display reproduced in BYU Studies:

The next time some M2C proponent tells you the 1842 Times and Seasons article isn't really all that important, ask why it was put on display in the Smithsonian along with the original manuscript of the Book of Mormon. Ask why they displayed the illustration from Stephens' book instead of Letter VII.

Far better would have been to display something Joseph actually wrote, such as the Wentworth letter, or Joseph's letter to Emma during the Zion's Camp march, than to display an article Joseph didn't even claim.

Clark's article starts on page 83. I'm not going to reproduce the whole thing here, just a few sections in blue that I'll comment on in red. Bolded emphasis is mine.

p. 85: Most Mormons fall into a more subtle error that also inflates Joseph's talents; they confuse translation with authorship. They presume that Joseph Smith knew the contents of the book as if he were its real author, and they accord him perfect knowledge of the text. This presumption removes from discussion the most compelling evidence of the book's authenticity--Joseph's unfamiliarity with its contents. To put the matter clearly: Joseph Smith did not fully understand the Book of Mormon. I propose that he transmitted to readers an ancient book that he neither imagined nor wrote.
This paragraph is full of logical fallacies and fact avoidance.
Let's start with the first sentence which claims that Mormons are falling into "a more subtle error" when they "confuse translation with authorship." A translator has to understand the original source well enough to restate it in the target language (in this case English). While it's true that many M2C promoters don't believe Joseph translated the text--they're adopting SITH instead--those who still believe what Joseph and Oliver taught reject the idea that Joseph authored the Book of Mormon. That position is the opposite of confusing translation with authorship.
Next, Clark accuses these hypothetical Mormons of presuming "Joseph knew the contents of the book and had a perfect knowledge of the text."
That accusation reflects Clark's own confusion of translation with authorship. Any translator necessarily knows the contents of the book he/she translates. How could they translate if they didn't know the contents of the book they are translating?
As for Joseph's knowledge of the text, Joseph re-read the text many times and made thousands of corrections for the 1837 and 1840 editions. In 1842, he re-read it again (I think because Benjamin Winchester was challenging it), yet he made no corrections at that point. Modern scholars like to think they are more familiar with the contents than Joseph Smith was, presumably because they have analytical software that does word counts and finds Early Modern English artifacts, but not one of them can authoritatively make corrections to the text based on their understanding of what was on the plates the way Joseph did.
There is zero historical evidence that Joseph was unfamiliar with its contents. No one surprised him by quoting a passage he didn't know about; no one educated him on the doctrine in the text; no one corrected him when he explained the text. Instead, what Joseph was unfamiliar with is the theoretical Mesoamerican setting the M2C scholars impose on the text. This is why Clark and other M2C proponents insist Joseph didn't understand the book.
Prior to even beginning the translation, Joseph was taught by Moroni and Nephi. Joseph wrote: "I was also informed concerning the aboriginal inhabitants of this country, and shown who they were, and from whence they came; a brief sketch of their origin, progress, civilization, laws, governments, of their righteousness and iniquity, and the blessings of God being finally withdrawn from them as a people was made known unto me." Joseph knew far more about the cultural context than the book itself reveals. These M2C scholars are stuck with the text Joseph translated. Joseph wasn't that limited.
It is a logical fallacy to assert that because Joseph transmitted an ancient book he neither imagined nor wrote, he therefore could not understand the book. The assertion that one can only understand a book one writes is not just nonsensical; it defies the very purpose for writing.
Clark wrote his article to convey his understanding of the topic. His argument would mean that because his readers did not write his article, they cannot understand it. This argument is akin to that made by the old Catholic priests who didn't want people having access to the Bible because they could never understand it, when the reality was they didn't want people reading the Bible because they would understand it differently from what the Catholic priests wanted them to.
The M2C scholars set themselves up as the "Interpreters" specifically because ordinary people who read the text don't see anything having to do with Mesoamerica, but a lot having to do with the ancient people of North America--the moundbuilders whose ruins were identified by Joseph as both Nephites and Jaredites.

One thing all readers share with Joseph is a partial understanding of the book's complexities. Indeed, many things about the book were simply unknowable in 1830. Over the last sixty years, Hugh Nibley, John Sorenson, and other scholars have shown the Book of Mormon to be "truer" than Joseph Smith or any of his contemporaries could know. Consequently, what Joseph Smith knew and understood about the book ought to be research questions rather than presumptions. Thanks in large part to his critics, it is becoming clear that Joseph Smith did not fully understand the geography, scope, historical scale, literary form, or cultural content of the book.
This is a euphemism for repudiating what Joseph taught. It's the premise for M2C; i.e., the prophets were wrong about the New York Cumorah because they were ignorant speculators, including members of the First Presidency speaking in General Conference.
There's nothing an academic likes more than "research questions" (aka, "employment security").
Far from "becoming clear," Clark's assertion is contrary to the evidence. One must reject what Joseph himself said about the tutoring he received to accept Clark's claim that Joseph didn't understand the geography, scope, etc.
That said, it does make sense that Joseph didn't understand the literary form (i.e., chiasmus and Hebrew parallelisms). That is one area Joseph never identified as a topic of his training by Moroni.
But Moroni did specifically train Joseph about the setting and culture. He told Joseph during his first visit in 1823 that the record had been "written and deposited not far from" Joseph's home near Palmyra, that it related the history of the aboriginal inhabitants of "this country," and that the name of the hill where the records were located was Cumorah.
It is possible that Joseph could not figure out Mormon's geography descriptions; i.e., he knew where the Book of Mormon events took place because he recognized them during his travels (having been shown them by Moroni), but he didn't see how the text described them because he was not familiar with Hebrew literary forms.

p. 90. As the consummate recordkeepers in Mesoamerica, the Maya erected numerous stone monuments in their cities that recorded the time elapsed since 3114 BC, their year zero. Maya calculations were based on counting by twenties instead of our practice of counting by tens. The major cycle of Maya time was a four-hundred-year period called a baktun. The Book of Mormon records several references to a significant four-hundred-year prophecy, [footnote 19 here says "See Alma 45:10, Helaman 13:9, 2 Nephi 26:9-10, Mormon 8:6, and Moroni 10:1]  consistent with this idosyncratic Mesoamerican calendar practice.
This claim that a four-hundred year prophecy is evidence of a Mesoamerican connection is not only highly speculative, but it destroys the spiritual significance of the 400 year period. Four hundred years is an important date in Genesis 15:13-14: "And he said unto Abram, Know of a surety that they seed shall be a stranger in a land that is not theirs, and shall serve them; and they shall afflict them four hundred years; and also that nation, whom they shall serve, will I judge: and afterward shall they come out with great substance."
The Children of Israel were in bondage for 400 years and delivered by Moses as the type for Christ. E.g., see 1 Nephi 17:24. Then the Book of Mormon people were delivered by Christ but after 400 years fell into bondage of sin. There are lots of interesting parallels here, but solely to justify the Mesoamerican geography, Clark replaces these important parallels and lessons from Genesis and the Egyptian bondage with a purported reference to Mayan calendars.

I don't have time right now to go through the rest of Clark's article, but at least I've shown three things:

1) how central the Times and Seasons articles are to the Mesoamerican theory;
2) the need for Mesoamerican advocates to undermine Joseph's knowledge of the Book of Mormon and his explicit rejection of the hemispheric and Mesoamerican models; and
3) the irrationality of replacing Old Testament references with allusions to Mayan culture.
On this last point, the Mesoamerican advocates also de-emphasize the Nephite observance of the Law of Moses, to the point that they claim the Nephites sacrificed rodents instead of lambs!
Posted by jonathan3d at 11:17 AM