I posted the second part of my peer review of Royal Skousen's preliminary manuscript on the witnesses of the Book of Mormon. Here's the link:

In this part, I discuss Brother Skousen description of what he says are "Two different methods of translating the Book of Mormon."

He concludes "The Book of Mormon, as we have it today (the result of losing the 116 manuscript pages), was most probably all translated by means of a seer stone that Joseph Smith had."

However, the "most probably" qualification evaporates in the narrative. Instead, he claims that "the only part that could have been translated by means of the Nephite interpreters" is the initial part of the book of Mosiah, which is not extant.

This line of reasoning leads Skousen, as I discuss in my part 3 tomorrow, to conclude that Joseph Smith's statements about the translation are "only partially true" and Oliver Cowdery's statements are "intentionally misleading."

The M2C/SITH citation cartel has left Latter-day Saints susceptible to more complete information coming from critics, such as CES Letter and Mormon Stories, both of which prey on uninformed Latter-day Saints by presenting narratives about Church history and doctrine that undermine faith. It's tragic and avoidable. Fully-informed Church members can detect the fallacies in the narratives from the critics, but our scholars are intentionally keeping the Latter-day Saints ignorant solely to protect and enforce their M2C and SITH theories.

Fortunately, the Internet makes it increasingly difficult for the M2C/SITH citation cartel to continue to mislead the Latter-day Saints. But it requires some effort and critical thinking on the part of members to assess the teachings of these scholars and become fully informed.

We can only speculate why this is the case. Everyone is subject to bias confirmation, but that doesn't excuse omitting relevant evidence.

Maybe our LDS scholars are just so used to omitting contradictory evidence that they think this is an appropriate technique.

However, that technique produces uninformed Latter-day Saints who--and this is critical--think they are fully informed because they read the work of these LDS scholars whom they respect as actual scholars.

- We see this technique in the Gospel Topics Essays on the Translation of the Book of Mormon, which doesn't even quote what Joseph and Oliver said about the Urim and Thummim.

- We see it in the Saints book which completely censored the New York Cumorah along with the the teachings about the translation by the Urim and Thummim.

- We see the M2C scholars steadfastly refusing to inform their readers and students about the teachings of the prophets about the New York Cumorah and all the extrinsic evidence that corroborates those teachings.

The worst example, of course, is Book of Mormon Central, which embeds M2C in its logo and spends millions of dollars to promote M2C and SITH. But as we see with Royal Skousen's book here, the problem is pervasive.

The progression away from the teachings of the prophets follows this pattern: 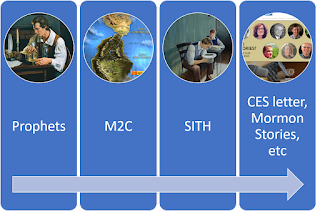