The history of LDS apologetics is a fascinating story that keeps getting more interesting. Lately, it has become a team sport, with the M2C/SITH citation cartel vs. the CESLetter/MormonStories citation cartel. Both teams resort to factual and logical fallacies to rally their respective sides.

Unfortunately (from my perspective), social media anecdotes, increasingly common personal experiences, and statistical trends indicate that the critics are winning many of these debates. People frequently tell me about friends, family and ward members who have been persuaded by the critical arguments. I've addressed some of the specific critical arguments here and here, but the bigger problem is on the faithful side, because we shouldn't be resorting to logical and factual fallacies to explain and defend our position.

Because I think both cartels actually share assumptions that are invalid and unexamined, I'm taking a look at their methodology and recognizing the worst LDS apologist/polemicist (in my opinion, due to long-lasting influence on other apologists).

We note that the term "apologist" has earned a pejorative connotation, particularly in our LDS setting, because of factual and logical fallacies employed by so many LDS apologists, as well as by their critics. However, in the abstract, the term itself is merely descriptive. Google uses this Oxford definition: "a person who offers an argument in defense of something controversial." There's nothing wrong with being an apologist, but an apologist can make either good or bad arguments.

Most apologists on all sides of the issues are very nice, sincere, thoughtful people. Those I know personally are great people whom I like and respect. I assume those I don't know personally are the same. For me, none of these discussions about Church history, textual interpretation, etc. are personal in the least. I expect people to disagree about all sorts of things and it has no bearing on friendship, cordiality, respect, etc. But I recognize that for some people, these debates are emotional, not intellectual. Their egos (and possibly their careers) are directly tied to the success of their theories. Their investment in their theories affects their rationality and objectivity. I see this among both faithful and critical apologists.

As we'll see below, there is an extreme version of apologetics referred to as "polemics." A polemicist focuses on attacking his/her opponents rather than defending a point of view. The more an apologist becomes a polemicist, the worse the ensuing arguments become, to the point where they are counterproductive.

Naturally, both faithful and critical apologists make good and bad arguments. One way to distinguish good from bad is whether you agree or disagree with a particular argument, but that's a "lazy learner" approach. It's mere bias confirmation, often without stating the underlying bias.

Bad apologetic arguments are nevertheless highly persuasive if they confirm your bias. This is the problem we see in much of apologetics from both LDS supporters and critics. The debate has devolved into tribalism, an "us vs. them" approach that has little chance of persuading or even improving understanding.

Another (more productive) way is to assess the validity of the argument in terms of fact and logic (reasoning). Usually we find a mixture of solid arguments with factual and logical fallacies. A good example is the mixture we see in the fairlatterdaysaint.org response to the CES Letter that we discussed last week here:

In my view, much of the fairlatterdaysaint.org response was counterproductive (from the persepctive of believers) because it's easy to see that, in this case, CES Letter was more factually accurate (and hence more persuasive) in specific instances. The faithful argument would be much stronger if they weren't constantly trying to justify M2C as they did in that response.

Factual fallacies are simply errors about facts, whether intentional or not. They include misquoting, taking facts out of context, omitting facts that contradict one's argument, etc. These are relatively easy to detect and correct, and apologists should embrace correction, regardless of how it affects their argument. An apologist who persists with a factual fallacy should be challenged directly. A polemicist resists correction.

You can assess apologist arguments, whether pro or con regarding a particular issue, by going through the checklist of logical fallacies.

One common fallacy that sort of blends logical with factual fallacies is the straw man fallacy: A straw man fallacy occurs when someone takes another person’s argument or point, distorts it or exaggerates it in some kind of extreme way, and then attacks the extreme distortion, as if that is really the claim the first person is making.

The ad hominem fallacy is the principal rhetorical tool of a polemicist. Polemicists who resort to ad hominem attacks are admitting that their arguments cannot survive scrutiny.

Lately, we have an LDS polemicist who not only relies on ad hominem attacks, but his very brand is ad hominem. Even better, he is so unsure of (or embarrassed by) his attacks that he remains anonymous.

I should say, tries to remain anonymous.

This doesn't make him (or her or them) a bad person. Undoubtedly this is a very nice guy who is just insecure and emotionally involved, whose ego and worldview is threatened by even faithful teachings that he has not been aware of before. His work is full of factual and logical fallacies that are easy to observe. It's pathetic, really, but we can't fault the poor guy for trying.

But we can fault the well-known polemicist who promotes his "anonymous" alter ego.

Obviously, I'm not going to name names or provide links. This specific individual (or group) is not the point. Even if one person decided to desist with the polemical ad hominem attacks, it wouldn't matter because the M2C/SITH citation cartel has plenty of such people who write anonymously, popping up in various fronts of the Potemkin village they inhabit.

You can look at fairlatterdaysaints.org and see that their authors are almost completely anonymous (like the 1842 Times and Seasons that are the foundation for M2C in the first place).

All I'll do here is provide a graphic that some readers will understand and a passage from a well-known book on Church history in which the author reviews the history of the problem with LDS apologetics that is ongoing (even though this book was published in 1998). Isn't it astonishing that 23 years later, the same people are still doing the same things, with the same results?

While I completely disagree with the author's interpretation of the facts regarding Church history, I nevertheless agree with his assessment of LDS apologetics. 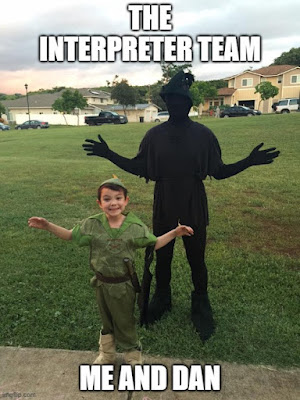 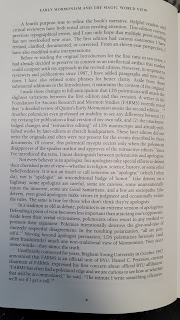 Not every believer is an apologist, but apologists take special efforts to defend their cherished point of view—whether in religion, science, history, or some other belief/endeavor. It is not an insult to call someone an “apologist” (which I often do), nor is “apologist" an unconditional badge of honor. Like drivers on a highway, some apologists are careful, some are careless, some unintentionally injure the innocent, some are Good Samaritans, and a few are sociopaths. Like drivers, even good apologists make errors in judgment and occasionally violate the rules. The same is true for those who don't think they're apologists.
In a tradition as old as debate, polemics is an extreme version of apologetics. Defending a point of view becomes less important than attacking one's opponents. Aside from their verbal viciousness, polemicists often resort to any man promote their argument. Polemics intentionally destroys the give-and-take of sincerely respectful disagreement. In the resulting polarization, "all are punish’d.” Moving beyond apologist persuasion, LDS polemicists furiously (and often fraudulently) attack any non-traditional view of Mormonism. They mince words—they mince the truth.
Unofficially connected for years, Brigham Young University in October 1997 announced that FARMS is an official unit of BYU. Daniel C. Peterson, current chairman of FARMS, expressed his first concern about official BYU affiliation: "FARMS has often had a polemical edge and we are curious to see how or whether that will be accommodated," he said. "The minute I write something offensive, we'll see if I get a call." 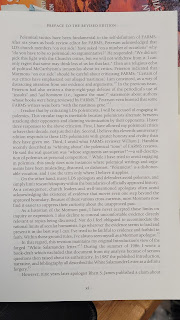 Polemical tactics have been fundamental to the self-definition of FARMS. After six years as book review editor for FARMS, Peterson acknowledged that LDS church members “on our side” have asked “on a number of occasions” why “ do you have to be so polemical, so argumentative?” He responded: "We did not pick this fight with the Church's critics, but we will not withdraw from it. I can only regret that some may think less of us for that fact.” Then as a religious echo of political McCarthyism's innuendos about its critics, Peterson indicated that Mormons “on our side" should be careful about criticizing FARMS: “Certain of our critics have emphasized our alleged 'nastiness,' I am convinced, as a way of distracting attention from our evidence and arguments.” In the previous issue, Peterson had also written a thirty-eight-page defense of the periodical's use of "insults” and “ad hominem (i.e., ‘against the man')” statements about authors whose books were being reviewed by FARMS. Peterson even boasted that some FARMS writers were born with the nastiness gene."
I realize that by criticizing LDS polemicists, I will be accused of engaging in polemics. This circular trap is inevitable because polemicists alternate between attacking their opponents and claiming victimization by their opponents. I have three responses to the above criticism. First, I have allowed my polemical critics to have their decade, not just their day. Second, I believe this eleventh-anniversary edition responds to these LDS polemicists with greater honesty and civility than they have given me. Third, I avoid what FARMS reviewer William J. Hamblin recently described as "whining about" the polemical “tone” of FARMS reviews. He said the real question was "whose arguments are superior?”—a self-description of polemics as personal competition. While I have tried to avoid engaging in polemics, this study does note instances where polemical writings and arguments have been misleading, distorted, or dishonest. “Polemicist” is a dishonorable vocation, and I use the term only where I believe it applies.
On the other hand, many LDS apologists and defenders avoid polemics, and simply limit research/inquiry within the boundaries of officially approved history. As a consequence, church leaders and well-intentioned apologists often avoid acknowledging the existence of evidence that moves even one step beyond the approved boundary. Because of these various cross-currents, most Mormons now find it easier to suppress their curiosity about the unapproved past.
As a historian of the Mormon past, I have never accepted those limits on inquiry or expression. I also decline to conceal uncomfortable evidence directly relevant to topics being discussed. Nor do I feel obligated to accommodate the rational limits of secular humanists. I go wherever the evidence seems to lead and present it in the best way I can. I've tried to be faithful to evidence and faithful to faith. Within those ground rules, I've always seen myself as a Mormon apologist."