On Thanksgiving week, it's a good time for American Latter-day Saints to remember and think about our constitutional freedoms. Yesterday our Come Follow Me lessons included D&C 134, which discusses the relationship between government and religion.

President Oliver Cowdery presented D&C 134 to the Church for approval on 17 August 1835. 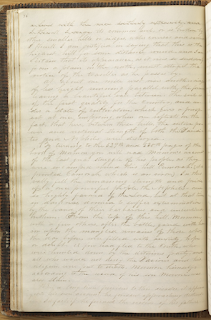 This was about one month after President Cowdery had published Letter VII in the Messenger and Advocate, as you can read in the Joseph Smith Papers, here:

For ideological reasons, though, our LDS scholars and historians have managed to keep most Latter-day Saints from knowing Letter VII exists, let alone its content. They have created a citation cartel that enforces their opinion that President Cowdery misled the Church about the New York Cumorah, and they don't want the Latter-day Saints to know what he taught. They expect their readers to be "lazy learners" who defer to them, the experts, to tell them what to read and what to think.

On this blog, we encourage Latter-day Saints to become "engaged learners" who read the original sources for themselves.

For Americans, the First Amendment promises that "Congress shall make no law respecting an establishment of religion, or prohibiting the free exercise thereof; or abridging the freedom of speech, or of the press."

As Jonathan Turley has pointed out, "Ironically, there is no need for such direct government involvement when social media companies are acting as the equivalent of a state media in the censorship of public debates."

This is the situation we Latter-day Saints face today because the M2C/SITH citation cartels dominate LDS scholarly literature and the M2C publications that draw from them, such as Meridian Magazine.

To the cartel, original teachings about Cumorah are deemed "disinformation" and "misinformation." They claim that entitles them to omit such teachings from their work so that Latter-day Saints, kept in ignorance, will see no alternative to M2C and SITH.

This is an excerpt from Turley's insightful analysis of a report from the "Commission on Information Disorder."

The findings and recommendations are found in an 80-page report on how to combat “disinformation” and “misinformation,” which are remarkably ill-defined but treated as a matter of “we know when we see it.”  From the outset, however, the Commission dismissed the long-standing free speech principle that the solution to bad speech is better speech, not censorship. The problem is that many today object to allowing those with opposing views to continue to speak or others continue to listen to them.

He points out that

However, the most chilling aspect of the report is the obvious invitation for greater forms of censorship. It calls for the government to become involved in combatting misinformation, the scourge of free speech and an invitation for state controls over speech. Ironically, there is no need for such direct government involvement when social media companies are acting as the equivalent of a state media in the censorship of public debates.

Fortunately, we can all bypass the M2C citation cartel because we can read the original documents in the Joseph Smith Papers and make our own informed decisions.

That, for sure, is something to be thankful for.