Today for M2C Education Week we'll look at some of the teachings of the M2C scholars. I've had people tell me they think I've made up some of what I've reported on these teachings, so we will provide quotations and links.

Once, a prominent M2C scholar told me he would never agree to have a side-by-side comparison of M2C and NYC scenarios because most Latter-day Saints would agree with the New York Cumorah and reject M2C. That glimpse of honesty explains why the M2C scholars continue to do what they do.

But we'll provide the comparisons for everyone to see.

And, as always, people can believe whatever they want.

Recently, a well-known M2C advocate asked me why I keep talking about Cumorah.

There are two main reasons.

1. Cumorah is the only known connection between the modern world and the world of the Book of Mormon in Lehi's promised land.

It is "known" in the sense that the prophets have taught that Cumorah is in New York. To those who reject the teachings of the prophets, it is not "known."

2. Cumorah drives the interpretation of the text.

Whether we accept or reject the teachings of the prophets about the New York Cumorah, we interpret the rest of the text accordingly.

If we accept the New York Cumorah, then it's easy to see how the rest of the text describes North America, mainly from the Mississippi River east.

If we reject the New York Cumorah, then it's easy to see how the rest of the text describes whatever setting one chooses for Cumorah. Whether you want Cumorah in southern Mexico, Baja, Panama, Peru, Chile, Malaysia, Africa--it really doesn't matter, because if the prophets are wrong, what are we dealing with in the first place?

Like other ancient texts, the Book of Mormon is vague about geography. References to place names don't help when the names have been lost in antiquity. We can't even say that a particular named site is the same throughout the text because different places can have the same name (as there was a Bountiful in the Old World as well as in the New World).

Once we reject the anchor of the New York Cumorah, we are "tossed to and fro, and carried about with every wind of doctrine, by the sleight of men." (Ephesians 4:14).

For those who reject the teachings of the prophets, Cumorah could be anywhere in the world. CES and BYU are so confused they've put Cumorah in a fantasy land that is nowhere on Earth.

Our M2C scholars know what the prophets have taught about Cumorah, but most of their followers (and donors) do not.

Instead, the scholars focus on their own theories to show why Cumorah cannot be in New York.

And that's fine. People can believe whatever they want. But these scholars are doing a disservice to Latter-day Saints and other believers in the Book of Mormon.

This week we'll look at examples from FairLatterdaySaints, Book of Mormon Central, BYU Studies, and FARMS (along with its successor the Interpreter).

Here is an example from FairLatterdaySaints (formerly known as FairMormon) (in blue), with my comments (in red).

There has been much talk both in publications and on the internet about the existence of two Cumorahs with relation to the location of the Book of Mormon culture.

The following verses from the book of Ether describe the relationship between the Jaredite lands, the hill Shim and the Hill Cumorah.

And the Lord warned Omer in a dream that he should depart out of the land; wherefore Omer departed out of the land with his family, and traveled many days, and came over and passed by the hill of Shim, and came over by the place where the Nephites were destroyed, and from thence eastward, and came to a place which was called Ablom, by the seashore, and there he pitched his tent, and also his sons and his daughters, and all his household, save it were Jared and his family.

And it came to pass that the army of Coriantumr did pitch their tents by the hill Ramah; and it was that same hill where my father Mormon did hide up the records unto the Lord, which were sacred.

The BofM only mentions one Cumorah. It was the same hill that the Jaredites called Ramah. It was located near the western seashore of a body of water large enough to be called a sea.

The Hill in New York, mistakenly named Cumorah by early Saints is south of any body of water large enough to be called a sea.

[The logical fallacy is begging the question occurs when, as here, an argument's premise assumes the truth of the conclusion, instead of supporting it. He says "mistakenly" as if he knows better than "early Saints" did. The term "early Saints" is a euphemism for the prophets, including Joseph Smith and Oliver Cowdery, as well as Lucy Mack Smith, David Whitmer, Martin Harris, and every Latter-day Saint during Joseph's lifetime.]

It is too far west to be thought of as near the Atlantic seashore. This seashore being the only one east of Palmyra.

[As we saw already, two of the finger lakes east of Cumorah are larger than the Sea of Galilee. Anyone can look on a map and see this, but M2C followers don't know that if they rely on the M2C citation cartel.]

I think we do a miss service when we talk about two Cumorahs or the “Two Cumorah theory.” This is like talking about the Two Yorks theory as an explanation of why there is a York in England and a new York in America.

[They don't want to talk about "Two Cumorah theory" because that might lead Latter-day Saints to learn what the prophets have taught about Cumorah. But as we'll see tomorrow, the M2C scholars had to explain why there are two Cumorahs because, until recently, most Latter-day Saints still believed what the prophets taught about Cumorah in New York.]

[Next, let's look at a classic exchange in the comments.]

Moroni had thirty five years of wandering to get from mesoamerica to New York. It only took the saints less than two years to get from Nauvoo to the Salt Lake valley and pioneers took less than a year to travel from St Louis to California.

[M2C advocates claim that in 1,000 years, Nephite society was confined to a small area of Mesoamerica--the same small area that the Jaredites were also confined to. Yet Moroni in only 35 years could travel, by himself, 3,000 miles to western New York. It's worse than that, of course. Moroni told Joseph the record was "written and deposited" not far from his home. This means Mormon had to have all the Nephite records near Palmyra to abridge them.]

John Lund has published maps stored in the Chuch [sic] Archives that were drawn based on converstions [sic] with Joseph Smith that show Moroni’s travels from Mexico to New York.

[That link no longer works, but these maps are goofy recollections made years after the fact based on hearsay that use modern place names.]

The vision was of the actual storage cave. It could have been anywhere in the world. The assumption that it was in the hill in New York are the opinions of men and there is no sense of agreement in the different reports of the experience.

[He's referring to the accounts from Brigham Young, Heber C. Kimball, and others who reported what Oliver told them about visiting the repository in the New York Cumorah. David Whitmer also said Oliver told him about it. The M2C advocates have to frame it as a "vision" to support their theories, but Brigham Young emphasizes that he knew the area well, Heber C. Kimball said he had visited Cumorah and saw the embankments around it, and Oliver stated it was "a fact" that the hill in New York is the actual Cumorah of Mormon 6:6.

Sperry's article was used in a BYU religion class as early as 1964. His article is replete with logical and factual fallacies, as are all the M2C discussions of Cumorah.

Basically, Sperry simply assumes that the Jaredites and Nephites lived in Central America (which he calls "Middle America") and then says New York is too far away. It's unbelievable to the point of shocking that these scholars don't recognize this basic logical fallacy.

Or maybe they think so little of their followers (and donors) that they don't expect them to notice the fallacies?

Then Sperry claims the topography of New York doesn't fit the geographical features mentioned in the text, which anyone can see is pure confirmation bias. In reality, the descriptions of the features are vague enough to fit a variety of possible settings, but they fit New York better than most.

No one doubts that the hill where Joseph Smith received the plates is known as Cumorah, but is the hill where the final battles between the Nephites and Lamanites took place another Cumorah? The book of Ether tells us that Omer traveled to this place of the last battles of the Nephites, and that the relatively short duration of this journey would not account for the three thousand miles from Middle America to New York. A similar journey was undertaken by Limhi’s men, of equally short duration. The description of the geographical features around the final battle site is also at odds with the topography of present day Cumorah. 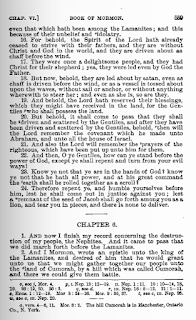 The 1879 LDS edition of the Book of Mormon had a footnote to Mormon 6:2 which read "The hill Cumorah is in Manchester, Ontario Co., N. York."

The LDS Church purchased the hill in New York and a session of General Conference in April 1928 discussed the significance of the hill Cumorah. President Ivins said, "... the acquisition of that spot of ground [the hill Cumorah in New York] is more than an incident in the history of the Church; it is an epoch—an epoch which in my opinion is fraught with that which may become of greater interest to the Latter-day Saints than that which has already occurred. We know that all of these records, all the sacred records of the Nephite people, were deposited by Mormon in that hill. .... Those additional records will come forth, they will be published to the world, that the children of our Father may be converted to faith in Christ, our Lord and Redeemer, through obedience to the doctrines which he taught."