Some people are curious about the cover of my book, Infinite Goodness. It's a photo of Thor's Well, taken by a friend of mine. 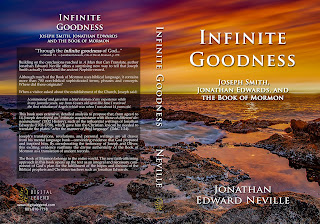 This is a spectacular area of the Oregon coast, about 13 miles from our home. There's a bike trail through the forest, lots of hiking trails, lots of rocky inlets, etc. We go there often.

I chose it for the cover of Infinite Goodness for several reasons. I love the photo, obviously. It's beautifully composed with striking colors.

There is no easy way to explain how profound and useful it is to see the connections between Joseph Smith and his Elias, Jonathan Edwards. I thought this photo was ideal as a metaphor.

Jonathan Edwards described heaven as a place where we will "swim in an ocean of love."

The image also represents God's "infinite goodness," a non-biblical Book of Mormon term that Jonathan Edwards used. The ocean's horizon is a common metaphor for infinity.

The book is a mere summary of the connections between Joseph Smith and Jonathan Edwards. I have lots more material, and more comes out almost daily. The connections to Edwards add richness and depth to the text of the Book of Mormon. We get a few glimpses, like the well is a sample of the entire ocean.

The well itself is an awesome metaphor for lots of things. It fills and drains, as you can see in this video I took.

You can think of lots of metaphors. Here are a few more.
The well is a metaphor for the ebb and flow of life, the need for constant renewal, nourishment, etc., the way the Spirit comes and goes (The wind bloweth where it listeth, and thou hearest the sound thereof, but canst not tell whence it cometh, and whither it goeth: so is every one that is born of the Spirit. John 3:8.)
_____
I've enjoyed learning about the connections between Jonathan Edwards and Joseph Smith for a few years now. People who knew about my research pestered me about publishing the book. I hesitated and delayed until the time was right.
Those who still believe Joseph Smith translated ancient records (the plates) will see that the influence of Edwards corroborates what Joseph and Oliver always said. Joseph as translator necessarily relied upon his own "manner of language" as he was guided by the Spirit to understand the engravings.
But there are plenty of people, believers and skeptics, who think Joseph did not translate the plates in any ordinary sense of the word.
I knew the book would run up against several threads of tradition. Lots of people are skeptical of Edwards' influence on Joseph Smith and the text of the Book of Mormon. They have various reasons, which is fine. Some are LDS scholars, others are skeptics. I'm used to such skepticism and criticism, which is why I dedicate all my books "To open-minded people everywhere."
Those who think Joseph incorporated only KJV language will resist the idea that Joseph was also influenced by Edwards, whose paraphrasing of the KJV appears repeatedly in the text.
Those who think Joseph didn't translate the plates, but instead read words off a stone in the hat (SITH) will object that the stone wouldn't have been influenced by Edwards (especially if they also believe the text is Early Modern English).
Those who think Joseph didn't translate but read the Spalding manuscript will object that Edwards' influence doesn't show up in Spalding (or Ethan Smith, or Sidney Rigdon, etc.).
Those who think Joseph composed the text will claim that the Edwards material supports their opinions, without realizing that evidence of composition is also evidence of translation.
At any rate, the image of Thor's Well represents, to me, a window on the infinite goodness of God.
_____
Here's how Edwards described Christian disciples. This is wonderful writing, IMO.
A vehement and constant desire
for the setting up of Christ's kingdom through the earth,
as a kingdom of holiness, purity, love, peace and happiness to mankind:
the soul often entertained with unspeakable delight,
and bodily strength overborne at the thoughts of heaven as a world of love,
where love shall be the saints' eternal food,
and they shall dwell in the light of love,
and swim in an ocean of love,
and where the very air and breath will be nothing but love;
love to the people of God, or God's true saints,
as such that have the image of Christ,
and as those that will in a very little time shine in his perfect image,
that has been attended with that endearment and oneness of heart,
and that sweetness and ravishment of soul,
that has been altogether inexpressible;
the strength very often taken away with longings
that others might love God more,
and serve God better,
and have more of his comfortable presence,
than the person that was the subject of these longings,
desiring to follow the whole world to heaven,
or that everyone should go before,
and be higher in grace and happiness,
not by this person's diminution,
but by others' increase:
a delight in conversing of things of religion,
and in seeing Christians together,
talking of the most spiritual and heavenly things in religion,
in a lively and feeling manner,
and very frequently overcome with the pleasure of such conversation:
a great sense often expressed,
of the importance of the duty of charity to the poor,
and how much the generality of Christians come short in the practice of it:
a great sense of the need God's ministers have of much of the Spirit of God,
at this day especially;
and most earnest longings and wrestlings with God for them,
so as to take away the bodily strength:
the greatest, fullest, longest continued,
and most constant assurance of the favor of God,
and of a title to future glory,
that ever I saw any appearance of in any person,
enjoying,
especially of late (to use the person's own expression)
the riches of full assurance:
formerly longing to die with something of impatience,
but lately,
since that resignation forementioned about three years ago,
an uninterrupted entire resignation to God
with respect to life or death,
sickness or health,
ease or pain,
which has remained unchanged and unshaken,
when actually under extreme and violent pains,
and in times of threatenings of immediate death;
but though there be this patience and submission,
yet the thoughts of death and the day of judgment are always exceeding sweet to the soul.