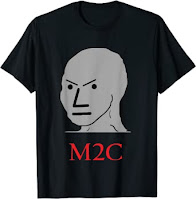 Many readers of this blog have noticed that whenever the topics of the Mesoamerican/two-Cumorahs theory (M2C) or the stone-in-the-hat (SITH) arise in a conversation, the M2C/SITH-sayers resort to rote statements such as "the Book of Mormon doesn't mention snow" or "Emma said Joseph used SITH."

These are programmed responses, the type of thing an NPC (non-player character) would say. We don't blame or criticize NPCs; they are unable to think for themselves, by definition.

But it's not merely M2C NPCs who speak this way.

Readers here are also puzzled at the way the M2C scholars and their followers deal with Cumorah. We would think they would welcome all faithful interpretations of the Book of Mormon and Church history.

And they would, if they were legitimate scholars. Legitimate scholars are eager to consider multiple working hypotheses based on known, relevant facts. They engage in respectful conversations and dialog. They invite various points of view to participate in their journals and conferences.

But that's not the case with the M2C/SITH citation cartels.

Book of Mormon Central, FAIRLDS, the Interpreter, and the rest of the M2C citation cartel continue to insist that M2C is the only viable theory. Lately they've also adopted SITH.

These scholars continue to misrepresent the issues involving Cumorah, they castigate "Heartlanders" with straw man arguments, and they manipulate the historical record to accommodate M2C. As we've seen, even the Joseph Smith Papers manipulates Church history to accommodate this theory of Book of Mormon geography.

Why would well-educated, experienced scholars cling to M2C and SITH, knowing that these theories repudiate the teachings of the prophets they claim to honor, respect and follow?

Maybe it's simple Groupthink; they're in a bubble because they've been trained/educated by M2C/SITH sayers, and everyone they work with thinks alike.

And maybe it is a result of neurophysiology.

For M2C/SITH-sayers, the idea that Cumorah really is in New York is unfamiliar and even threatening. The implications: a New York Cumorah means that these faithful LDS teachers have been misleading generations of Latter-day Saint students.

The idea that Joseph Smith actually translated the plates is also unfamiliar and threatening for the same reasons.

An excerpt from Whole Brain Living explains how people who are threatened cannot access their rational thinking brains. When something does not feel familiar, however, our amygdalae tend to label that unfamiliar thing as dangerous, and they respond by triggering our fight-flight-or-play-dead fear response. If it has been your natural tendency to fight, you probably rage, get big and loud, go on the attack or try to shoo the thing away. If it is your style to run like the wind or play dead, then that response may be your best choice.

When our amygdalae are triggered and we feel fear, we are not able to run the learning and memory circuitry of our hippocampi. Until we push the pause button and take a moment to calm down and feel safe again, we will not be able to think clearly. This is why anyone who is freaking out with test anxiety tends to perform poorly, regardless of how well prepared they are. When our limbic anxiety circuit is triggered, we are neuroanatomically cut off from accessing our higher cortical thinking centers, which is where our learned knowledge is stored.

When we understand the physiological connection between these parts of the brain, we can re-assess the work of the M2C/SITH-sayers with greater understanding and empathy.