The standard dogma of M2C (the Mesoamerican/two-Cumorahs theory) has Moroni hauling one set of plates, plus the breastplate and interpreters, from Mesoamerica to western New York.

This journey would "pose no difficulty whatsoever" according to FairMormon.

You ought to read the explanation at that link to see for yourself.

Another great one is on the web page of BMAF, the corporate owner of Book of Mormon Central.

[Some people still don't realize that Book of Mormon Central is merely a front for the M2C advocating organization Book of Mormon Archaeological Forum.] 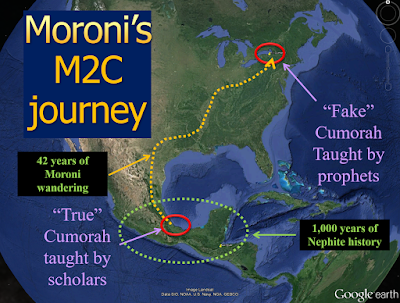 The trip from Mesoamerica to western New York is about 2,600 miles, if you travel fairly straight over land.

Most people wonder, if this 42-year trip was so easy for Moroni, why was the entire civilization of the Nephites confined to a much smaller area in Mesoamerica for 1,000 years?

The answer is easy: The disparity is the only way to make M2C make sense.

M2C is pure bias confirmation based on a mistake in Church history. It doesn't have to be logical, or even rational. It doesn't require evidence. It doesn't even have to fit the text, because if you believe M2C, you can add anything you need to the text, including volcanoes, massive stone pyramids, jade, jungles, jaguars, etc.

Then, after traveling so far, Moroni stopped at an insignificant, nondescript drumlin, built a stone box, and put the plates and other objects inside.
_____

If you accept the M2C dogma that such a journey circa 400 AD poses "no difficulty whatsoever," we need to ask, why didn't Moroni go the extra 300 miles to Sharon, Vermont?

According to the Saints book, it took the eruption of a volcano in Indonesia to move Joseph Smith's family from Vermont to New York.

Alternatively, of course, Moroni might have buried the plates at the Hill Cumorah; i.e., at the scene of the final battles and the repository of Nephite records.

That's what Joseph and Oliver taught in Letter VII.

In that case, it would make sense to move Joseph's family to New York from Vermont, by whatever means necessary--including a volcano.