Here's the latest example of "neutrality" as implemented by our M2C scholars.

Some of us remember when the anonymous Gospel Topics Essay on Book of Mormon Geography was supposed to be a declaration of neutrality, but it was obvious the day it was released that the essay would not slow down the efforts of M2C intellectuals to claim prophetic support as they continue to imprint M2C on the minds of the Latter-day Saints.

Since then, Book of Mormon Central has spent millions of dollars in the effort. Other M2C intellectuals continue to lend their support to the cause. 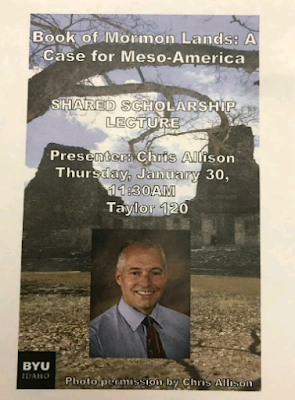 Chris Allison teaches Book of Mormon classes at BYU-Idaho. This means he's already teaching his students M2C because he's using the infamous BYU/CES  maps which teach students to think of the Book of Mormon in a fictional fantasy world, with the Hill Cumorah far, far away from New York.

Now Brother Allison is making "A Case for Meso-America" right on the campus of BYU-Idaho.

It's a good title. It fits with Brother Callister's M2C-approved book A Case for the Book of Mormon.

It's not difficult to make a case for anything, of course. Any lawyer can make a case for any side of any issue. Making a case has nothing to do with truth; it's a matter of making arguments based on a particular interpretation of selected facts.

I'm curious about this "making a case" trend. It works great as a bias confirmation exercise, but what does it do for open-minded people?

Doesn't "making a case" invite readers, listeners and viewers to seek out the "other side of the story" or at least other perspectives? Thanks to the ongoing censorship by Book of Mormon Central, FairMormon, and other M2C organizations, the only "other side of the story" to M2C that most members hear about is CES Letter, Mormon Stories, and others who claim the Book of Mormon is fiction.

A truly "neutral" position would allow alternative perspectives to be presented at BYU and CES. Let Brother Allison make his case for "Meso-America" and let someone else make a case for the New York Cumorah. Then let students make up their own minds.

That would be a big step forward, but it will never happen as long as the M2C intellectuals have their way.

Aside from those who merely seek to confirm their biases, the question for undecided people is whether the case is persuasive or not. The unpersuasiveness of M2C is evident; outside of a handful of M2C intellectuals, their employees, and their followers, no one believes M2C.
_____

I encourage everyone attending BYU-Idaho to attend the event. You'll surely learn some great reasons why the teachings of the prophets about the New York Cumorah are wrong.

It's virtually certain you'll hear that the anonymous 1842 Times and Seasons articles were written by Joseph Smith. Those ridiculous articles are the entire premise for M2C. Those who have read Mormon's Codex and the related M2C literature from the citation cartel recognize that everything else is bias confirmation and sophistry (not that there's anything wrong with that, because if you want to believe M2C, that's fine with me).

You probably won't hear that M2C originated with RLDS scholars, but you'll hear about the ways the Book of Mormon was mistranslated because Joseph didn't realize the Nephites lived among the Mayans.

You probably won't hear what Joseph and Oliver and their contemporaries and successors taught about the New York Cumorah in Letter VII and elsewhere, unless it is to explain why they were all wrong.

If you go, let me know what he has to say.