Only an intellectual could believe them

One quotation attributed to George Orwell goes something like this:

"There are some ideas so absurd that only an intellectual could believe them."

That is apparently a rewording of something he wrote in Notes on Nationalism (1945):

"One has to belong to the intelligentsia to believe things like that: no ordinary man could be such a fool."

We'll be discussing those issues this week for reasons I'll explain tomorrow.
_____

I've been asked many times why I care about all of these issues. Why not just enjoy retirement and all the other things I'm involved with? Or why not just go on a mission somewhere?

My answer to one General Authority is that I don't want to go on a mission and have to tell people that Joseph Smith produced the Book of Mormon by reading words that appeared on a stone in a hat, that when he said he translated the ancient plates, he didn't really mean that because someone else translated it, or that the Book of Mormon took place in Mesoamerica among Mayans, whose DNA is all Asian and whose cultural history is anything but Christian or Hebrew in any sense.

I'm fine with people believing all those things, but I don't think anyone has to believe them to be a faithful member of the Church.

And I don't think it helps the cause of the Restoration when our intellectuals teach that Joseph Smith and Oliver Cowdery were wrong about such things as the translation of the Book of Mormon and the location of the Hill Cumorah.
_____ 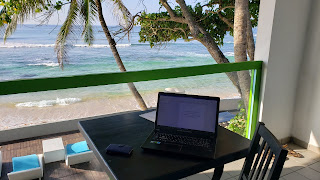 I'm writing this from Sri Lanka. Here's a photo of my "office" this week. We attended Church here Sunday. It was awesome.

Last week we attended Church in Laos. Another awesome experience.

There, one local brother asked me about things he's read on the Internet about Church history.

These are the same questions I get wherever we go. They came up last year when we lived in Africa. Church history matters--a lot. That's why it is such a problem to have narratives in Saints that contradict the original sources in favor of the revisionist Church history and M2C.

Here's a map of 415 cities I've visited. (The one in Antarctica is a Chilean military base we visited, but this software counted it as a city.) Living abroad gives one a much different perspective than
living in Utah, for sure. I've lived in Europe for 8 years and in Asia for 2 years, so far. 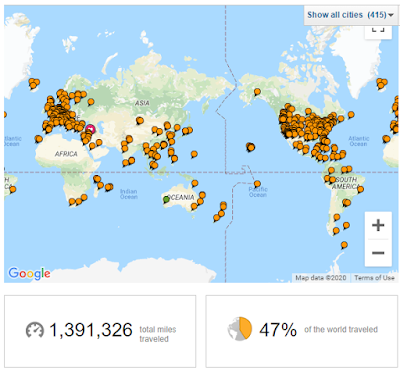 I've spoken with Church members and missionaries throughout the world. I think the Church's prospects are exciting and there is great hope and optimism for the future, both within and outside the Church.

The one big impediment is the uncertainty brewing about the truth claims; specifically, the origins and historicity of the Book of Mormon. Missionaries have told me their investigators ask about these things all the time, but the missionaries have no answers.

The anonymous Gospel Topics Essays are so ambiguous they create more problems and raise more questions than they answer.
_____

We often hear that the world is getting more wicked, which is why they reject the gospel.

Maybe that's true in some sense, but in my experience, people everywhere are becoming more kind and loving, more focused on their families, more prosperous and happy.

There are definitely "first world" problems in the U.S. and Europe, and to some degree in other countries, mostly of a psychological nature. Of course there are areas of political danger, but that's always been the case. I grew up during the Cold War when it was a big deal to visit Berlin, especially East Berlin. When I visited Lebanon for two weeks, the State Department told us it was too dangerous and we shouldn't go, but everyone was friendly and helpful.

Except in the Church today, members and investigators (friends) don't know what to believe. Do we believe what Joseph Smith and Oliver Cowdery wrote and testified to? Do we believe the teachings of the prophets and apostles starting with Joseph and Oliver and continuing with all their successors?

The M2C intellectuals and revisionist Church historians are telling us no. Do not believe Joseph and Oliver, they say.

They want us to believe Joseph didn't even use the plates, that he didn't even translate, and that the Hill Cumorah is somewhere in Southern Mexico.

People are confused and disturbed in their faith because of all of this, just as Joseph Fielding Smith warned many years ago.

Fortunately, we can each make up our own minds on these topics. We can study, pray, and ponder. We can believe whatever we want.