What is "manifestly absurd?"

“There remain Latter-day Saints who insist that the final destruction of the Nephites took place in New York, but any such idea is manifestly absurd. Hundreds of thousands of Nephites traipsing across the Mississippi Valley to New York, pursued (why?) by hundreds of thousands of Lamanites, is a scenario worthy only of a witless sci-fi movie, not of history.”
John Sorenson, Mormon’s Codex (Deseret Book, 2013), p. 688.
I suppose most people find it difficult to believe that hundreds of thousands of Lamanites would "traipse" from Mesoamerica all the way to western New York. It's axiomatic that the fake scenario Sorenson set out is "manifestly absurd."
Even RLDS scholar L.E. Hills, who developed the M2C map that many LDS scholars continue to promote today, thought it was "useless" to show the final battles of the Jaredites in New York State.
But here's the irony: it is the fake M2C scenario that Hills developed and Sorenson copied that is "manifestly absurd."
By repudiating the teachings of the prophets about the New York Cumorah, the M2C intellectuals have conjured up an interpretation of the Book of Mormon that fits nowhere in the real world. Instead, they give us fantasy maps such as the one taught at BYU. 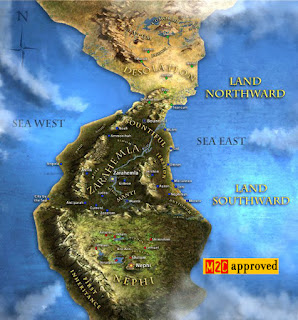 A far more productive approach is accepting the teachings of the prophets about Cumorah and interpreting the text accordingly.
Posted by jonathan3d at 3:30 PM