It's not just in the Lego movie that everything is awesome. 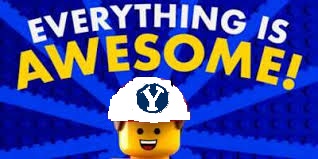 Think about this. We're nearing the end of 2016, when more people around the world have studied the Book of Mormon than ever before, thanks to Gospel Doctrine class. It is changing lives as people come to Christ and enjoy living the gospel more fully.

During 2016, more people have read Letter VII (Seven) than ever before, at least since the days when it was actually published, in its entirety, in Church magazines (The Improvement Era, Millennial Star, Times and Seasons, Gospel Reflector, and Messenger and Advocate).

Who knows? Maybe in 2017 when we study Church history in Gospel Doctrine class, the Ensign will finally join the list of official LDS publications and print Letter VII in its entirety.

That would be awesome. 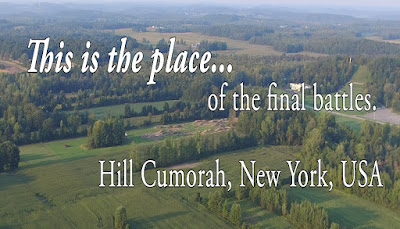 So far, during 2016, many people have learned what Joseph and Oliver said about Cumorah being in New York. Which in turn means more people can appreciate how the Book of Mormon describes a North American setting, with everything that goes along with that.

While I've heard anecdotes about how some Gospel Doctrine teachers are still referring to Central America as the setting for the Book of Mormon, I hear far more about the Heartland.

Here are some awesome key points that more and more members of the Church are appreciating:

1. Joseph and Oliver said Cumorah was in New York, and this knowledge was universal in the Church, among members and leaders, until new ideas originating with scholars from the Reorganized Church crept in during the 1920s-1930s, over the objections of Apostle Joseph Fielding Smith.

3. Joseph Smith linked the Book of Mormon to North America when he described the Midwest as the "plains of the Nephites," when he said Zelph was known from the Rocky Mountains to the East Sea or Cumorah, and when he identified tribes living in these areas as Lamanites.

4. Joseph Smith never once linked the Book of Mormon to Central America. He repudiated Orson Pratt's hemispheric model when he wrote the Wentworth letter.

6. Farmers near Cumorah in New York plowed up artifacts for years and sold them to tourists to get rid of them. Boxes full of artifacts, including weapons, were removed from the New York Cumorah during excavations of the road to the top.

7. Every modern prophet and apostle who has spoken about Cumorah identified the New York hill as the scene of the final battles, including in General Conference as recently as 1975 and 1978. Between 1879 and 1920, the official version of the Book of Mormon specifically identified Cumorah as the hill in New York.

8. More and more LDS are learning that the Mesoamerican theory--the idea that the Book of Mormon took place in southern Mexico and Guatemala--is based on a theory that there are "two Cumorahs." The theory goes like this. The hill in New York is merely the place where Moroni buried the plates. It was not Cumorah. The real Hill Cumorah is somewhere in southern Mexico. The idea that the hill in New York is the Cumorah of Mormon 6:6 is a false tradition started by unknown persons which Joseph, Oliver, and all of their successors adopted and perpetrated.*

9. Joseph Fielding Smith twice warned the Saints that the two-Cumorahs theory would cause members to become confused and disturbed in their faith in the Book of Mormon. The second time he was President of the Quorum of  the Twelve. The evidence of the fulfillment of that warning is all around us.

10. More and more LDS are rejecting the Mesoamerican theory as they learn about its implications. As people come to understand the origins of the Mesoamerican theory, they return to what Joseph and Oliver said in the first place and the Book of Mormon takes on a new meaning. The North American setting, often referred to as Heartland and Moroni's America, makes sense and reinforces the significance of the promised land and associated covenants.

_______________________
*Every Mesoamerican proponent believes Joseph Smith and Oliver Cowdery and the other prophets and apostles, including President Marion G. Romney in General Conference in 1975, were perpetuating a false tradition! They don't talk about this much because they don't want ordinary members of the Church to realize this is what they're saying. They go so far as to ridicule members of the Church who accept the New York Cumorah. The most well-known LDS scholar who promotes the Mesoamerican theory wrote, in a book titled Mormon's Codex (published by Deseret Book) that "There remain Latter-day Saints who insist that the final destruction of the Nephites took place in New York, but any such idea is manifestly absurd. Hundreds of thousands of Nephites traipsing across the Mississippi Valley to New York, pursued (why?) by hundreds of thousands of Lamanites, is a scenario worthy only of a witless sci-fi movie, not of history." Prominent LDS scholars have endorsed this book. I won't list them here, but you can find out for yourselves if you read the reviews and the Foreword in the book. IOW, every time you read something written by an LDS scholar who promotes Mesoamerica, you can be sure that they, too, think Joseph and Oliver and the other prophets and apostles are perpetuating a false tradition. The implications are obvious, and explain why Joseph Fielding Smith's warning to the Saints about the two-Cumorahs theory was so important. Too important to be ignored.