Continuing from my previous post about Temple Square...
When we descended the escalator and turned left, we saw the wonderful exhibit about prophets through the ages. This is where you find the section about Joseph Smith that I discussed yesterday, with the unfortunate and confusing painting of Joseph translating the plates with no interpreter, with the plates sitting on the table between him and Oliver. The article in the Ensign pointed out the painting is historically inaccurate, but it's on display in the North Visitors Center on Temple Square anyway. With millions of people touring the center every year, I imagined a conversation I would have with an investigator that knows something about the Church.
The conversation between M (me) and I (investigator) concluded with the last two lines:

I:   "What else in here is false?"
M: "Come over here. I'll show you. But then let's look at all the great stuff on giving service."

I take Investigator over to an elaborate display about the Book of Mormon, including Helaman's young warriors: 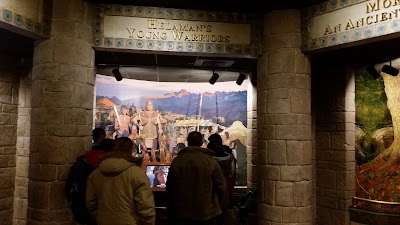 and Moroni burying the plates in New York: 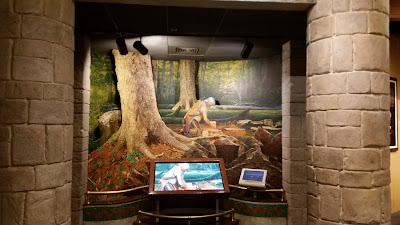 But the major display is unbelievable. 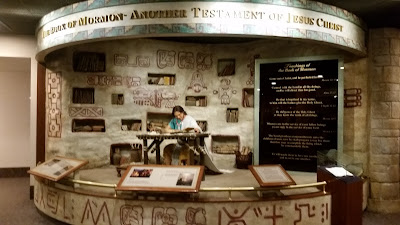 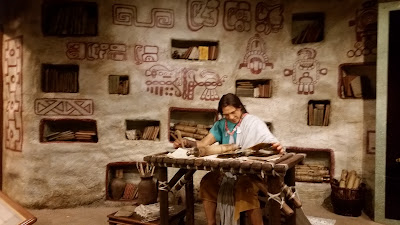 Why would Mormon be surrounded by Mayan-like glyphs?

Moroni told Joseph Smith the record was written and deposited not far from his home in New York. Joseph and Oliver visited the repository (Mormon 6:6) in the Hill Cumorah. They wrote Letter VII, in which they described the specific location of the final battles of the Nephites on the west side of the Hill Cumorah in New York.

So what is going on here in the Visitors Center?

Supposedly the Church is "neutral" on the issue of Book of Mormon geography, but when you see displays like this, in the most prominent Visitors Center in the Church, visited by millions of people each year, you have to conclude the Church is neutral only on where in Mesoamerica the Book of Mormon took place!

I'm not the only one who has noticed this. You can do a web search and find others.

On top of that, when you open the missionary edition of the Book of Mormon you see this illustration: 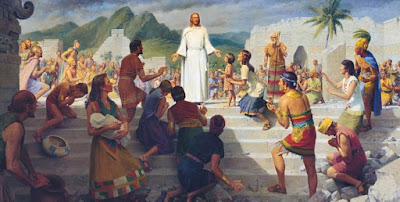 I continue my conversation with my investigator friend:

I:   "You didn't tell me the Nephites were Mayans."
M: "They weren't."
I:   "Are you looking at this display?"
M: "Yes. Those aren't, uh, necessarily Mayan glyphs. They represent ancient America. Generically."
I:   "Seriously?"
M: "Okay, they do look Mayan. No doubt. But the Church is neutral on the geography question."
I:   "Over there, Moroni is burying the plates in New York, right?"
M: "Yes."
I:   "How did he get there if he lived in Central America?"
M: "Our scholars say he walked."
I:   "He carried the gold plates that weighed 60 pounds, plus the breastplate and interpreters, all the way from southern Mexico to western New York."
M: "That's what they say."
I:   "Let me get this straight. You say the Hill Cumorah is in New York, right?"
M: "Yes. Moroni buried the plates there."
I:   "But you told me before that Mormon had a repository of records in the Hill Cumorah."
M: "That's right. It's in Mormon 6:6."
I:   "But your display shows Mormon writing the record in Mayan country."
M: "The scholars say there were two Cumorahs."
Investigator says nothing.
M: "I know it sounds crazy. I think the scholars are wrong. I think there's one Cumorah, and it is in New York. Joseph Smith and Oliver Cowdery made that clear."
I:   "So your scholars disagree with Joseph Smith and Oliver Cowdery?"
M: "Yes."
Investigator looks at the display.
I:  "It looks like your Church agrees with the scholars."
M: "The Church is neutral, as I said."
I:   "You just gave me a Book of Mormon. It shows Christ visiting the Mayans."
M: "Yeah, but it's supposed to represent all of North and South America."
Investigator looks at me like I've lost my mind.
M: "I like to think the clouds represent North America."
I:   "So you're saying if I read your Book of Mormon, it will tell me about Mayans?"
M: "No. It never mentions pyramids, volcanoes, or anything about Central America. It doesn't even mention stone buildings."
I:   "What the?"
M: "I know. The paintings are a mistake. It didn't happen like this."
I:   "What about this display?"
M: "It's a mistake, too. It didn't happen like this."
Investigator hands me the copy of the Book of Mormon I gave him.
I:  "Tell you what. When you get your story straight, maybe I'll read this."