Temple Square vs the Ensign

This post isn't directly related to Book of Mormon geography issues, but you'll see why it's here tomorrow.

Last week we visited Temple Square with some out-of-town non-LDS friends. The North Visitors Center had been remodeled since the last time we were there, particularly the bottom level. We noticed this exhibit about Joseph Smith: 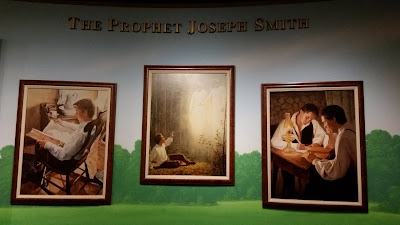 Look at the painting on the far right.

I wondered, "Does the designer of this exhibit not read the Ensign?"

In the October 2015 Ensign (see article here, although you have to download the .pdf to see the painting itself), this painting was discussed. Here's what the article says on p. 55:


Pretty clear. This painting is not supported by any historical account. In fact, in this painting, Joseph isn't even using a translator, whether a stone, urim and thummim, or anything else. (Note: the Ensign article is generating a lot of discussion about what actually happened, a topic for another day.)

Yet this incorrect painting is shown to the millions of people who visit Temple Square!

These three paintings are presumably part of a set, so for artistic purposes, maybe they go together. But why is the Visitors Center showing people a painting that not only is not supported by any historical account, but contradicts every account we have?

Fortunately, in this case, our visitors weren't with us for this exhibit. I don't like being in a position of explaining to non-members that exhibits in the Visitors Centers are wrong, but anyone who reads the Ensign (or the scriptures) knows this painting is misleading at best.

Is this painting on display because we don't have a historically accurate painting of Joseph translating the plates? If so, I know of some artists who would be happy to remedy that problem.

Is it on display because we don't want to show what our official Church magazine explains is the historical reality? I hope not.

Maybe you know of another reason why this painting is on display in the Visitors Center. If so, let me know. Mesomania is bad enough, but having historically inaccurate paintings in the most-visited Visitors Center in the Church is asking for confusion.

Sample dialog between M (me) and I (investigator) during a visit to Temple Square:

M: "Here are paintings showing Joseph's story."
I:   "What language were the plates written in?"
M: "Reformed Egyptian, apparently."
I:   "Where did Joseph Smith learn Reformed Egyptian?"
M: "He didn't."
I:   "Then how is he reading the plates?"
M: "He had a translator. Moroni gave it to him with the plates."
I:   "Where is it?"
M: "Moroni took it back when he retrieved the plates."
I:   "No, I mean in this painting."
M: "It's not in there."
I:   "But the scribe is writing."
M: "I know. The painting is a mistake. It didn't happen like this."
I:   "Who is the scribe?"
M: "Oliver Cowdery."
I:   "So he saw the plates? What about other people, like Joseph's wife?"
M: "Actually, Oliver didn't see the plates during the translation. They were covered with a cloth."
I:   "But they're sitting there on the table."
M: "I know. The painting is a mistake. It didn't happen like this."
I:   "Why do you have a false painting on display?"
M: "I have no idea."
I:   "I heard Mormons hide their history. Is there something you're not telling me?"
M: "Uh, no. It's all explained in the Ensign, our official magazine."
I:   "You're telling me you are not hiding your history, but you have a false painting of Joseph Smith translating the plates on display in your Visitors Centers, and I'm supposed to read your magazine to understand why the painting is false."
M: "I guess so."
I:   "What else in here is false?"
M: "Come over here. I'll show you. But then let's look at all the great stuff on giving service."