I trust that by now, readers recognize how pervasive Mesomania is, but for new readers, I'll point out another example.

The December 2016 Ensign has an excellent article about Helaman's stripling warriors. Here's the accompanying illustration: 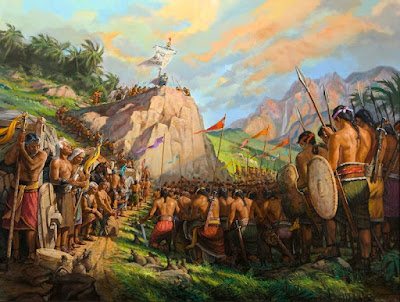 You can click on the photo to go to the artist's web site.
This is a wonderful piece, from an artistic perspective. But as an illustration of the Book of Mormon text, what does it teach?
It teaches Mesomania. Look at how it is derivative of the Arnold Friberg painting that is still included in every copy of the Missionary Edition of the Book of Mormon (as well as in all the foreign language editions): 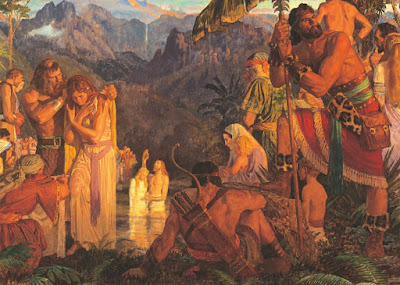 We have the same high mountains with waterfalls. The same palm trees. The same guy leaning on a staff. The same bare-chested men with the short skirts and bands around the waist.

None of which is mentioned in the text. As I've pointed out, the text doesn't describe mountains until you get to Helaman, and then it's only in connection with hills--like the Missouri mountains referred to in the Doctrine and Covenants.

As I said, as art, this is wonderful material. But as illustrations of the Book of Mormon, it is highly misleading and, in my opinion, destructive of faith because it is teaching the two-Cumorahs theory.

In fact, I think it's false advertising. Imagine you're an investigator in Sri Lanka or Nigeria or Russia. You see these illustrations. Then you read the text and don't find a single mention of such a setting. You wonder, how could Alma hide in a thicket of small trees in the midst of a Mayan jungle? You ask where these events took place, and the missionaries have no answer.

Or, worse, if they've been reading what LDS scholars write, the missionaries tell you that the Book of Mormon took place in Central America and Joseph Smith and Oliver Cowdery were confused and wrong when they said Cumorah was in New York.

And then you realize the illustration reinforces what the missionaries are telling you.

If you have any access to the Internet and any curiosity at all, you soon discover that's exactly the same argument that anti-Mormons make.

Granted, most investigators (and most members) don't think this through. But the ones who do have serious problems with the idea that Joseph and Oliver misled the Church. And the source of confusion is LDS scholars, not the prophets and apostles who have spoken about Cumorah.

So I ask, why are we still using illustrations inspired by Mesomania?

As long as we're on the topic, here's another example.

Thousands of people visit the Conference Center in Salt Lake City and view these Friberg paintings inspired by Mesomania. Fortunately, they include the one showing Mormon and Moroni, together, on the Hill Cumorah in New York. Unfortunately, that painting has been deleted from the Missionary and Foreign Editions of the Book of Mormon. It was replaced by the painting of Moroni, alone, burying the plates. That switch epitomizes the two-Cumorahs theory.

Now, finally, look at this wonderful painting of Mormon at age 10, by the same artist who did the painting in this month's Ensign: 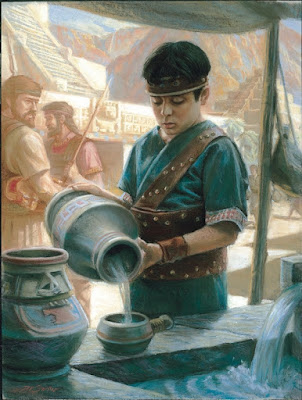 It's also a fine illustration, but notice how it is derivative of Arnold Friberg's painting. 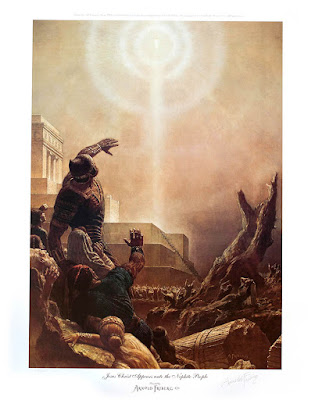 Again, we have the ubiquitous stepped pyramid with the central staircase and the temple on top that all the Mesoamerican advocacy groups have adopted in their logos, but which are never mentioned in the text. Plus we have the steep, tall mountains that the text never describes.

That's Mesomania.
Posted by jonathan3d at 7:51 AM