Perspectives, inside and outside

Some months ago a PowerPoint slide made the rounds of the Internet. 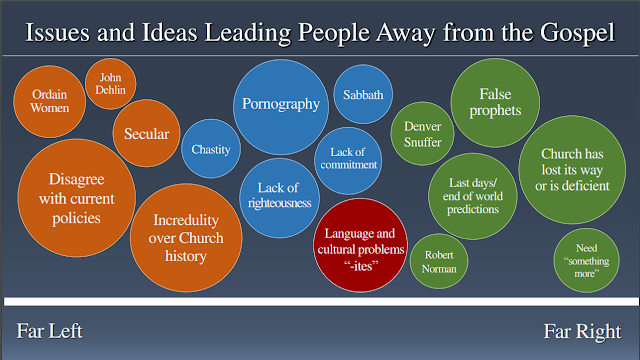 This graphic purports to be part of a presentation to LDS General Authorities on the topic of what issues and ideas lead people away from the Church (notice the slide says "Gospel" instead of "Church"), organized from "Far Left" to "Far Right." I can't vouch for its authenticity, of course, but it does reflect what I've seen and heard over many years, coming from the perspective of leaders and active members in the Church. I call this the "active LDS" perspective.
A corresponding graphic was prepared and circulated also showing what purports to be the issues and ideas leading people away from the Church, but this one is from the perspective of people who are not active LDS (inactive, former members, nonmembers).

This one, too, reflects what I've seen and heard over many years, coming from those who are not active in the Church (whether nominally members or not) for whatever reason. I call this the "non-LDS perspective."
I have lots of thoughts on each component. For example, the "non-LDS" chart cites "Church lies about its history," but that's an anachronistic objection now that we have access to original documents. I still hear people repeat the canard that Brigham Young changed Lucy Mack Smith's biography of Joseph, or that the text of the Book of Mormon was changed x number of times, but we all have access to the original documents, so those objections seem silly, at best.
Another one that stands out on the "non-LDS" chart is "Poor apologetics backfire." I couldn't agree more with this one, of course; I think the citation cartel has done some good, but far more harm because of their insistence on certain ideas, especially their two-Cumorahs theory that Joseph and Oliver were ignorant speculators who deceived the Church about Cumorah being in New York.
For now, on this blog, I want to point out something that stands out to me.
Notice that on the "non-LDS" chart, one of the largest circles is "Book of Mormon is not ancient."
On the "active LDS" chart, the Book of Mormon isn't even mentioned.
These are both accurate representations of the respective points of view, IMO. The "active LDS" chart doesn't mention the Book of Mormon because active LDS don't think (or admit) that Book of Mormon geography and historicity are important. They implicitly believe the book regardless. (Even that's an overgeneralization, because many active LDS I know have problems with this topic. Some don't even believe the Book of Mormon is an ancient document; they just don't see this as a deal breaker for ongoing activity.) Active LDS don't understand why someone who believes the Book of Mormon would entertain doubts about its authenticity.
It's essentially self-selection; i.e., if they did entertain doubts or questions, maybe they wouldn't be active LDS.
From the outside (non-LDS) perspective, the historicity of the Book of Mormon is a fundamental issue. If, as they believe, the Book of Mormon is not ancient, then why should they believe it? Of course, this line of thinking leads to the corollary that Joseph was not a prophet, etc.
In my view, the geography and historicity of the Book of Mormon are fundamental questions for everyone who reads the text. I think both have been well established by the North American setting. Some active LDS may set aside their questions in the interests of the greater good, meaning the other reasons for faith, but it seems unlikely that anyone who reads the Book of Mormon does not wonder, sooner or later, where it took place.
It is for this reason that I've been writing this blog.
I think the traditional answers of the LDS scholars and educators who promote the Mesoamerican and two-Cumorahs theory directly undermine faith, for all the reasons I've discussed. These two graphics reflect that.
I also think that if/when the LDS community converges on unity in supporting what Joseph and Oliver taught about Cumorah in New York, at a minimum, the problems of geography and historicity will diminish. Inactive, former, and prospective LDS will take another look at the Book of Mormon. In so doing, they will respond to the spiritual messages.
But I have to say, I don't think the current generation of Mesoamerican promoters will change their minds, regardless of the evidence. It will take the cumulative experience of Church members over an unfortunately long period of time to change the so-called consensus that has led to the problems depicted in these two graphics.
Posted by jonathan3d at 1:18 PM