When we read historical accounts from journals, newspaper articles, or even the scriptures, we sometimes extrapolate all kinds of things from tiny bits of information without considering the broader context. People tend to interpret history to support narratives they already believe or accept.
___________

We spent May 1, 2017 (May Day) in Paris. We walked around 7 miles, based on my phone's pedometer. When we got home that night, we saw this headline on the Internet, here: 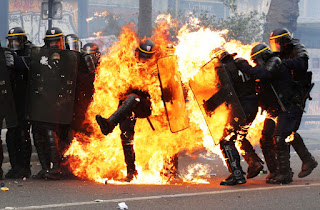 This is the image that led the article: a policeman engulfed in flames from a Molotov cocktail. (The story behind the photo is here.)

The article begins with this sentence:

Fighting broke out in central Paris during a rally held close to the Place de la Bastille, where protesters shouted “Fascists out!”
______________

For anyone who was not actually in Paris that day, this article would be the reality of what happened in Paris on May Day.

But for those of us who were there, the riot was confined to a tiny area.

We walked less than a kilometer from Place de la Bastille where the violence took place. Here's a photo of Paris of us with our friends, among thousands of others who were completely oblivious to the city that was, according to the newspaper headlines, "burning" at the time.


A future historian could justifiably report that on May 1, 2017, Paris was on fire. He would have photographs to prove it. People would believe the news report and the historian's interpretation and it would become the prevailing narrative. Accounts such as mine from other people who were in Paris on that day would be marginalized or discredited because they contradict the desired narrative.

Regardless of the future prevailing narrative, to the vast majority of the 10 million people who were actually in Paris that day, it was simply a beautiful day to enjoy the sights, the food, and the company of friends.

Even today, whenever we read news reports, we sometimes come to believe that the reports are both accurate and representative of a larger whole. But often neither is the case.
______________

In my study of Church history, I've come across many such examples.

One of my favorites is the disparate treatment given to Wilford Woodruff's writings. On 28 November 1841, Woodruff summarized an entire day's events in his journal.

28th Sunday I spent the day at B. Young in company with Joseph & the Twelve in conversing upon a variety of Subjects. It was an interesting day. Elder Joseph Fielding was present. He had been in England four years. We also saw a number of english Brethren. Joseph Said the Book of Mormon was the most correct of any Book on Earth & the key stone of our religion & a man would get nearer to God by abiding by its precepts than any other Book.
Notice that Woodruff did not use quotation marks when he noted what Joseph taught that day. I assume he summarized Joseph's teaching accurately, but it was not a direct quotation. Nevertheless, the History, 1838-1856, transformed Woodruff's summary into a direct quotation. You can see it here.
Now, the quotation has become part of the narrative to the point that it appears in the official Introduction to the Book of Mormon, found in every copy. You can see that here.
This is one of many teachings attributed to Joseph Smith. At least this one has a legitimate source, albeit not a direct quotation as it is portrayed today. To be historically accurate, the Introduction should say something such as this: "Woodruff summarized a day's conversation by explaining that Joseph said the Book of Mormon was the most correct of any Book on Earth & the key stone of our religion & a man would get nearer to God by abiding by its precepts than any other Book."
This is a minor point, but we see a narrative of a direct quotation created from a passing summary of a day's teachings, and now it has been reproduced millions of times as part of the Book of Mormon.
Compare that to a much more detailed historical account that Mesoamerican proponents oppose, which is why most Church members have never read it. At least, it is not nearly as well known as the fabricated "most correct book" quotation.
_______________
In his journal (Volume 1) under May 1834, Woodruff described the Zion's Camp march this way:
We made it a practice of pitching our tents on Saturday night and not remove them untill Monday morning. We had preaching on the Lords day. Brother Joseph often addressed us  in the name of the Lord while on our journey and often while addressing the camp he was clothed upon with much of the spirit of God. His precepts were very instructive and interesting.
While on our travels we visited many of the mounds which were flung up by the ancient inhabitants of this continent probably by the Nephites & Lamanites. We visited one of those Mounds and several of the brethren dug into it and took from it the bones of a man.
[Interlinearly after "We visited one of those Mounds":] considerd to be 300 feet above the level of the Illinois river. Three persons dug into the mound & found a body. Elder Milton Holmes tookthe arrow out of the back bones that killed Zelph & brought it with some of the bones in to the camp. I visited the same mound with Jesse J Smith. Who the other persons were that dug in to the mound & found the body I am undecided.
Brother Joseph had a vission respecting the person. He said he was a white Lamanite. The curs was taken from him or at least in part. He was killed in battle with an arrow. The arrow was found among his ribs. One of his thigh bones was broken. This was done by a stone flung from a sling in battle years before his death. His name was Zelph. Some of his bones were brought into the Camp and the thigh bone which was broken was put into my waggon and I carried it to Missouri. Zelph was a large thick set man and a man of God. He was a warrior under the great prophet /Onandagus/ that was known from the hill Camorah /or east sea/ to the Rocky mountains. The above knowledge Joseph receieved in a vision. [spelling from Woodruff's journal]
_______________
Applying the same historical process as the scholars did for the "most correct book" quotation, they could have transformed the portion highlighted in red above as a direct quotation from Joseph Smith. This could be part of the Introduction to the Book of Mormon, along with the "most correct book" quotation.
I'm not recommending that for the same reason I don't think we should have turned the "most correct book" phrase into a direct quotation, but I am in favor of including Woodruff's account of Zelph as part of the Introduction. It would make a big difference for people to understand what Joseph actually said about Book of Mormon geography.
Some LDS scholars who promote Mesomania try to cast doubt on Woodruff's account of the Zelph incident because it obviously contradicts their theory. They note that there were others present who wrote different variations of the incident, and because the accounts are not identical, they suggest none should be believed. A good summary of these accounts is here.
_______________
Posted by jonathan3d at 9:43 AM