Yesterday a friend gave me a cutout from the newspaper: 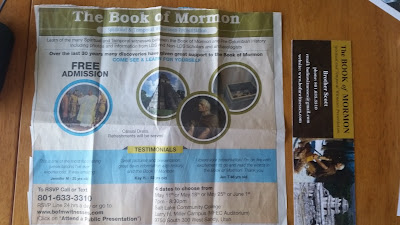 You might want to attend, or not. You might want to tell your friends, or not. I'm just making you aware of what's going on. (I blogged about this already here, complete with illustrations.)
"Brother Scott" is holding these events every Thursday from May 11-Jun 1 from 7-8:30 pm in Sandy. You can get the info from his web page here:
http://www.bofmwitnesses.com/
I applaud the effort to make the Book of Mormon better known. I found Brother Scott to be engaging and enthusiastic. Apparently he went on one of the infamous "Book of Mormon tours" to Central America and is on fire now.
Unfortunately--very unfortunately--Brother Scott is promoting the Mesoamerican setting with lots of classic Mesomania. He's telling people Izapa Stela 5 is Lehi's dream, that Joseph wrote the articles in the Times and Seasons, etc.
Of course, he forgets to tell the audience about Letter VII, Zion's camp, the numerous General Conference addresses, President Joseph Fielding Smith's warning about the two-Cumorahs theory, and anything else that contradicts his theories.
Brother Scott didn't want to hear what I have to say.
He's actively soliciting invitations to come speak at firesides, as you can see here:
http://www.bofmwitnesses.com/schedule-a-ward-or-stake-presentation
I'm sure he'll have no problem getting invitations, and I'm also sure he'll have no problem presenting his material in Church buildings because he's promoting Mesoamerica. As long as you promote the two-Cumorahs theory, you're good to go. You can even use the artwork on the walls of the Church buildings as illustrations. As well as the illustrations in the missionary edition of the Book of Mormon itself.
But if his audience thinks carefully about his presentation, or spends 5 minutes on the Internet, they'll soon realize that he, like all good Mesoamerican advocates, is saying Joseph and Oliver were ignorant speculators who misled the Church about Cumorah being in New York, the plains of the Nephites being in Ohio, etc.
I think Brother Scott could do a lot of good if he would simply consider an alternative to Mesoamerica and focus on critical aspects of Church history, such as Letter VII.
Posted by jonathan3d at 3:10 PM