I've been curious about the claim that the Church has no official position on Book of Mormon geography.

It seems to me that the location of Cumorah in New York is as well established as just about anything else in Church history and in the statements of the prophets and apostles. So far as I've been able to determine, every modern prophet and apostle who has formally spoken or written on the issue has said Cumorah is in New York, and none of them have said it is not or is somewhere else.

It is only a few LDS scholars with disproportionate influence who insist Cumorah cannot be in New York.

Beyond Cumorah, of course, there have always been a variety of opinions about geography, ranging from as large as the entire hemisphere to as small as the borders of New York State. So beyond Cumorah, with what we know now, there could not be an official position.

This is exactly what was reflected in the 1879 official edition of the Book of Mormon, when Orson Pratt divided the text into the modern chapters and verses. He also included footnotes about Book of Mormon geography. He suggested locations for Zarahemla, the River Sidon, etc., but always with qualifiers such as "it is believed."

The footnote for Cumorah, however, declares unequivocally that the Hill Cumorah is in New York.

Just like Joseph and Oliver declared in Letter VII.

The first question is, how is an official position of the Church expressed?

Maybe the clearest statement of official positions is the Articles of Faith, which have been canonized. However, these are expressions of belief about doctrines, and the 8th article of faith itself leaves a lot of room for individual variation:

Another interesting aspect of the Articles of Faith is that they were included in the Wentworth letter, published in the Times and Seasons on March 1, 1842. Joseph explained the purpose in the opening paragraph:

"March 1, 1842.—At the request of Mr. John Wentworth, editor and proprietor of the Chicago Democrat, I have written the following sketch of the rise, progress, persecution, and faith of the Latter-day Saints, of which I have the honor, under God, of being the founder. Mr. Wentworth says that he wishes to furnish Mr. Bastow [Barstow], a friend of his, who is writing the history of New Hampshire, with this document. As Mr. Bastow has taken the proper steps to obtain correct information, all that I shall ask at his hands is that he publish the account entire, ungarnished, and without misrepresentation." 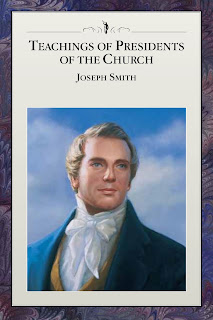 I raise this because of the well known suppression of an important part of the Wentworth letter in Chapter 38 of the manual, Teachings of the Presidents of the Church: Joseph Smith.

If you want to read the entire letter, you can see it in the Times and Seasons link above, or on lds.org at this link: https://www.lds.org/ensign/2002/07/the-wentworth-letter?lang=eng

But you can't read the entire letter in the lesson manual because the following passage was omitted:

“Through the medium of the Urim and Thummim I translated the record by the gift and power of God.… This book … tells us that our Savior made His appearance upon this continent after His resurrection;"

Original letter (with the omitted portions in red):

"Through the medium of the Urim and Thummim I translated the record by the gift and power of God.

"In this important and interesting book the history of ancient America is unfolded, from its first settlement by a colony that came from the Tower of Babel at the confusion of languages to the beginning of the fifth century of the Christian era. We are informed by these records that America in ancient times has been inhabited by two distinct races of people. The first were called Jaredites and came directly from the Tower of Babel. The second race came directly from the city of Jerusalem about six hundred years before Christ. They were principally Israelites of the descendants of Joseph. The Jaredites were destroyed about the time that the Israelites came from Jerusalem, who succeeded them in the inheritance of the country. The principal nation of the second race fell in battle towards the close of the fourth century. The remnant are the Indians that now inhabit this country. This book also tells us that our Savior made His appearance upon this continent after His Resurrection;"
_____________________

It's bad enough that they deleted the important passage in red, but they even deleted the "also" so readers would have no idea that the Book told us something else important.

I've asked around but haven't been able to discover why the Curriculum Committee deleted this passage. I'm left to wonder why. Here are some possibilities, and if anyone who reads this knows the real reason, let me know and I'll edit this post to explain it.

For which of the following reasons did the Curriculum Committee delete the passage?

1. Because it is no longer considered an "official position" the way Joseph Smith himself considered it.

2. Because it contradicts the Mesoamerican and two-Cumorahs theory.*

3. Because it contradicts what modern anthropological and evolutionary science tells us about the history of humanity.

4. Because the Committee doesn't want members to know about these issues, let alone discuss them.

The two-Cumorahs and Mesoamerican theories (Mesomania) are so widely held that many people take them for granted, unexamined and unchallenged. The last thing the Mesomania advocates want is for members of the Church to read that Joseph Smith said "The remnant are the Indians that now inhabit this country" and for that to be considered the official position of the Church. [D&C 28, 30, and 32 say the same thing, which is a little more difficult for Mesomania advocates to avoid, so they just don't mention those sections. See the display of the Mission to the Indians at the Church History Museum as an example. That's the famous exhibit that explains "Early members of the Church believed the American Indians were Lamanites," instead of explaining that the Lord identified the tribes in New York and Ohio as Lamanites, and that there are still at least some members today who believe what the D&C says.]

Mesomania is also why you'll never read Letter VII in anything approved by the Curriculum Committee. The Joseph Smith papers had to publish Letter VII because Joseph had his scribe copy it into his personal journal, but even when they cite it, they refer to "a hill in New York" instead of "Cumorah," which Letter VII unequivocally identifies as the hill in New York where three important things happened: (i) the final battles of the Jaredites and the Nephites; (ii) the site of Mormon's record repository; and (iii) the site of Moroni's stone box from which Joseph obtained the Harmony plates.
_____________________

We're left wondering what is an "official position" at this point. If one part of the Wentworth letter is official (i.e., the Articles of Faith), but the rest is not, why would Joseph insist the account be published "entire" when he wrote it?
_____________________

A related example is Letter VII itself.

Not only was it written by the Assistant President of the Church, Oliver Cowdery, with the assistance of Joseph Smith.

Not only did Oliver receive the Priesthood and the keys of the gathering together with Joseph Smith.

Not only was Oliver commanded to select things to publish "as it shall be proved by the Spirit through him." (D&C 57)

But Joseph Smith specifically endorsed all 8 letters, including Letter VII, on at least three occasions after they were first published in the Messenger and Advocate. He did not do this for any written material besides these letters and the formal revelations.

Part of Letter I was included in the Pearl of Great Price, but the others were never formally canonized, possibly because of their length, but also possibly because Oliver had left the Church (although that didn't stop Joseph from endorsing the letters and making sure they would be reprinted so all members of the Church would have them).

It takes a lot of audacity to claim, as the Mesoamerican advocates do, that Letter VII is not an official position of the Church--especially when they're constantly citing anonymous articles from the Times and Seasons that were never again cited or reprinted and were never once endorsed by Joseph Smith.***

Even better is the claim that an anonymous, plagiarized (and I think bogus) "fax from the Office of the First Presidency" constitutes an official Church position that overrules Letter VII and every modern prophet and apostle who has declared that Cumorah is in New York.

That's the topic of part 2, where I look at what some people say is an "official position" about Book of Mormon geography.
___________

* As you can imagine, Mesomania advocates have managed to contort Joseph's plain language into a Mesoamerican setting. Joseph was living in Nauvoo, Illinois. He wrote to Mr. Wentworth, an editor living in Chicago, Illinois. The cities were about 250 miles apart. They shared the same state, the same "country" (in the sense of a nation, the United States), and the same "country" in the generic sense of an expanse of land. But you'll find Mesomaniacs using sophistry to claim Joseph really meant the entire Western Hemisphere and just mis-wrote this one word in the entire letter.

** BYU has become one of the more strident institutions promoting Darwinian evolution; I'm told students can get extra credit for working on evolution, while they are discouraged from even mentioning intelligent design or creation science. If I'm wrong about that, I'd like to have someone tell me of any science professor at BYU who even allows a discussion of intelligent design or creationism in class, or approves research on that topic. People who believe the Bible and Book of Mormon are literal are in a quandary because the only universities that allow the study of creation science or intelligent design are Christian, and they don't accept the Book of Mormon (yet). I prefer the approach of multiple working hypotheses with regard to science (as well as Book of Mormon geography). Why not teach both evolution and intelligent design and let the respective theories fend for themselves? Evolution itself relies on faith because no one has shown the mechanism for nonlife becoming life, which requires the simultaneous evolution of independent but necessary complex systems. Evolutionary biologists use a mathematical construct that multiplies the infinitesimal possibility of such simultaneous complex random combinations times the infinity of alternative universes, a topic I address elsewhere. The point here being that academics can "prove" anything they want, when they want it badly enough.

***I know, the Mesomaniacs argue that because the boilerplate at the end of the relevant 1842 issues of the Times and Seasons claimed it was "edited, printed and published by Joseph Smith," Joseph must have approved of these anonymous articles. But no one believes Joseph actually printed the newspaper, so why insist he actually edited it? I've shown he did no editing, printing, or publishing in my 3-volume series on the 1842 Times and Seasons.
Posted by jonathan3d at 8:00 AM