If you search for the Hill Cumorah on Google Earth right now, you'll get a nice aerial view of the bizarre Mayan pyramid built on what many LDS scholars now refer to merely as "a hill in New York." Look at this link.

In case Google updates the satellite photo, here it is: 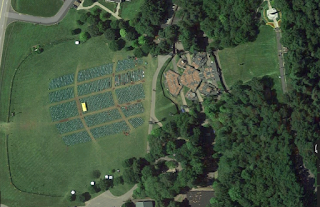 In the view below, you get some additional ground-level photos of two Cumorahs!

The one on top is "a hill in New York" that was identified as Cumorah by Joseph Smith, Oliver Cowdery, and all of their contemporaries, as well as Joseph Fielding Smith, Marion G. Romney, Mark E. Peterson, etc.
Mesomaniac LDS scholars now want you to believe this New York Cumorah was a false tradition. They insist that all of the modern prophets and apostles listed above were ignorant speculators who misled the Church until the BYU Mesomanics figured it out and rescued us from this false tradition. At least, this is what you will be taught if you attend BYU or read any of the publicatons of the citation cartel (BYU Studies, Mesomania Meridian Magazine, the Interpreter, FairMormon, BMAF and its subsidiary Book of Mormon Central America, etc.).
Instead, the citation cartel insists that you believe the lower photo is the "real" Cumorah. This is Cerro El Vigia Near Santiago Tuxtla, Veracruz, Mexico. You can see it better here, about half way down the page.
Cerro El Vigia is only one of multiple "candidates" for the comical wild goose chase for the "real" Cumorah in Mesoamerica. 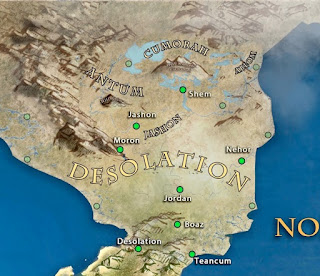 Of course, our favorite location for Cumorah doesn't show up on Google Earth yet. It never will, actually, because it's the mythical map being taught to every new BYU student, shown at the left in close-up. This is the map invented as a response to the official policy at BYU to stop teaching the two-Cumorahs and Mesoamerican theories. The staff simply used the traditional Mesomania interpretations of the text and used actual North and South instead of the Sorenson translation in which North means West, etc. Then they avoided the many problems presented by variations of the Mesomania models by making their own assumptions and creating a video-game version of the imaginary Book of Mormon lands.
BYU students are expected to have increased faith in the Book of Mormon by learning that the events took place in a mythical, video game setting.
Of course, BYU students are never taught about Letter VII and the related historical context. Nor are any readers of material published by the citation cartel.
I'd rather have people read the text of the Book of Mormon and Letter VII than anything ever published by the citation cartel.
__________
Posted by jonathan3d at 9:00 AM