Why missionary work is stalling

People often ask me why missionary work is stalling. It is well known that last year, 2016, saw the slowest growth of the Church since the 1930s .This is a complicated issue that I can't spend much time on here, but there is an important element that most people are not considering, and it has to do with Letter VII, ultimately.

Here's the graphic. I'll explain it below.

Most people know that much of the growth of the Church now is in Africa; in fact, nearly 10% of convert baptisms in the Church in 2015 were in the Africa West Area alone (24,409 converts out of 261,862 total throughout the Church).

I think the numbers are higher than 10% because so many "convert" baptisms in the U.S. are children baptized when they are older than 8, as well as part-member families, which legitimately count, but are not "converts" in the sense that we usually think; i.e., people coming from another religious tradition.

The Africa West Area consists of Sierra Leone, Liberia, Cote d'Ivoire, Ghana, Togo, Benin, and Nigeria, where total Church membership is only around 270,000. This means the Africa West Area had a conversion rate of about 90 converts per 1,000 members.

Other areas in Africa have comparable conversion rates to the Africa West Area. In 2016, 100 stakes were created. 40 were in the U.S., 21 in Africa, 7 in Central America, and 11 in South America. 16 of the 30 new districts were also in Africa. These statistics show that because Africa has relatively few members, the conversion rate per 1,000 members is far higher than elsewhere in the world, looking at regions or areas.

This means the conversion rate outside of Africa is well below 16/1,000.

Here's a graphic depicting the trends. Note that converts in Africa didn't increase significantly until around the year 2000. The graphic would depict a much steeper decline if not for Africa.

It would be interesting to see this chart on a regional or Area basis, but that information is not publicly available. No doubt, there is considerable variation among the various Areas. You can read about trends and statistics here: http://cumorah.com/

The statistics on converts per missionary reflect similar trends.
Back in 2013, some people thought that the large increase in the number of missionaries from the age change would correspond to much higher baptism numbers, but that didn't materialize.
"If we have double the missionaries out, and a stake president said that at a recent priesthood conference in Utah County they told them that by around July there will be 90,000+ missionaries out there. We could be easily looking at 500,000 or so converts by next year, I think it could come close to 400,000 for this year since the initial part of 'the surge' is really only now beginning to start going out to their in-field areas."
By and large, people haven't noticed this decline in baptisms per missionary and baptisms per 1,000 members because the number of total baptisms hasn't changed all that much.

We can think of as many explanations for these trends as we want, and every ward, stake and Area has unique circumstances, but I'd like to point to an interesting development. Of course, correlation is not causation, but in this case, I think there are significant elements of causation.
____________________
With the background above, look at the chart again. Based on the statistics on creation of new stakes and districts, the recent downward trend would be much steeper if we excluded Africa. Why is that important? One reason could be that it is educated people in the Western Hemisphere who are most influenced by the factors I put on the chart. 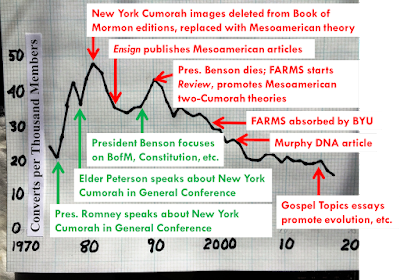 I'm not saying, suggesting, or implying that "the" cause of the increase in baptisms/1000 in the late 1970s was President Romney's 1975 conference talk about Cumorah, but I do think that generally, when we focus on what Joseph Smith and Oliver Cowdery actually taught about the Book of Mormon (i.e., Letter VII, even if it isn't actually quoted), people respond to the Spirit. A similar thing happened after Elder Peterson spoke about the New York Cumorah in General Conference in 1978, and when President Benson gave a series of General Conference talks about the Book of Mormon, the Constitution, etc., especially his 1986 talk about the Book of Mormon as the keystone of our religion, his 1987 talk about the U.S. Constitution, and his 1988 talk about Flooding the Earth with the Book of Mormon.
On the other hand, when there were significant developments in the promotion of the Mesoamerican and two-Cumorahs theories, there were sharp declines in baptisms per thousand members.
This could all be a coincidence, of course.
You decide.
As near as I can tell, the last time the New York Cumorah was mentioned in General Conference was in 1978. It would be interesting to see what would happen if this was discussed anew in General Conference.
What if someone--anyone--actually quoted Letter VII from Joseph Smith's personal history?
__________________
I'll focus on the 1981 change in the illustrations in the Book of Mormon as an example because I don't have time to go through each of the incidents on the chart.
As I've explained before here, https://bookofmormonwars.blogspot.com/2017/05/expectations-and-art-missionary-work.html, far more people view the illustrations in the missionary and foreign language editions of the Book of Mormon than read the actual text.
In 1981, when the New York Cumorah images were removed from the official editions and replaced with the depiction of Christ visiting the Nephites in Chichen Itza, along with Moroni burying the plates at "a hill in New York" (because the "real" Cumorah was in Mexico), anyone reading the text together with Church history became confused, just as President Joseph Fielding Smith warned.
Imagine an investigator, youth, or missionary looking at the Friberg and John Scott paintings and then reading the text to learn about Mayans, massive stone pyramids, jungles, etc.
The text doesn't fulfill the promises made by this artwork.
Readers are disappointed.
They search the Internet for answers and read either anti-Mormon or LDS scholarly articles, both of which teach that Joseph and Oliver were ignorant speculators who misled the Church about the Hill Cumorah being in New York.
Or, they visit Temple Square and learn the same thing in the North Visitors Center, as I've explained here: https://bookofmormonwars.blogspot.com/2016/12/yes-they-do-teach-two-cumorahs-theory.html
_____________________
Usually, when people discuss trends in missionary work, they focus on such things as "the Internet," "materialism," "general wickedness," changes in missionary ages, the "centers of strength" policy, missionary preparation, etc. etc. No doubt all of these play some role.
But if the Book of Mormon was designed to tell the remnant who they are and to convince "Jew and Gentile that Jesus is the Christ," what do we expect when we confuse investigators, youth, and the missionaries themselves about what Joseph and Oliver plainly taught in Letter VII?
As long as our LDS scholars, educators, and media people are trying to persuade everyone that Joseph and Oliver were ignorant speculators who misled the Church about the New York Cumorah, I think the downward trend will continue.
But that's merely my opinion.
I'm sure the Mesomania cognitive dissonance will prevent these same LDS scholars, educators, and media people from even trying to understand my point, let alone accept it.
But there are plenty of other people who aren't suffering from Mesomania who will know what I'm talking about and will offer even more insights as we continue to discuss this.
_________________
BTW, except at BYU, there's no policy that prohibits anyone from quoting Letter VII or any of the modern prophets and apostles who have quoted it or taught what Joseph and Oliver taught in Letter VII. You can quote it from the Improvement Era, the Millennial Star, the Times and Seasons, the Gospel Reflector, and the Messenger and Advocate.
You just won't find it in the Ensign.
Yet.
_________________
In the future, when people ask me about what's happening with missionary work, I'll refer them to this post. You can do the same when people ask you those questions.