Why BYU/LDS Mesoamerican advocates align with anti-Mormons about Cumorah

As I've pointed out before, BYU Studies, FairMormon and the rest continue to promote the Mesoamerican and two-Cumorahs theories. Right on their splash page, they have a link to "Charting the Book of Mormon," a document that strongly promotes Mesomania.

Look at their page on "Plausible Locations of the Final Battles" here.

They show a map of Mesoamerica and then explain it this way:

The hill Ramah/Cumorah, upon which both the Jaredites and Nephites fought their last battles (see Ether 15:11; Mormon 6:4–6), is shown here on the northwestern edge of the Tuxtla Mountains in Mexico, about ninety miles from a narrow pass (see Mormon 3:5). Other Jaredite locations, including Omer's flight to Ramah (see Ether 9:3), are also shown here. Again, these locations are plausible, but not definite.
_________________

What is not included on their list of "plausible locations of the final battles" is the place where Joseph and Oliver said it actually took place; i.e., the hill Cumorah in New York.

This is one of many examples of how BYU Studies continues to teach that Joseph and Oliver were ignorant speculators who misled the Church about the Hill Cumorah.
_________________

This Mesomania has significant implications. BYU Studies offers a comparison of "The Two Final Battles" involving the Jaredites and the Nephites, here: https://byustudies.byu.edu/charts/11-138-two-final-battles 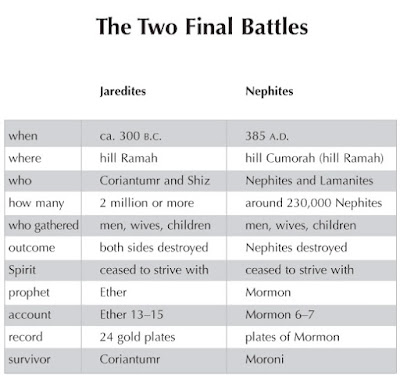 Notice the row titled "how many." They want people to believe that 2 million Jaredites were killed at Cumorah and "around" 230,000 Nephites.

This is the same theory that FairMormon wants people to accept. Here, for example, FairMormon claims the Hill Cumorah must be "large enough to view hundreds of thousands of bodies."

These are exactly the same claims made by anti-Mormons to undermine faith in the Book of Mormon.

And Oliver Cowdery addressed these false claims way back in 1835.

Oliver explained that Mormon foresaw the approaching destruction and its parallel to the Jaredite destruction in the same place. Speaking from Mormon's perspective, and after describing the mile-wide valley west of the Hill Cumorah, Oliver wrote:

"In this vale lie commingled, in one mass of ruin the ashes of thousands, and in this vale was destined to consume the fair forms and vigerous systems of tens of thousands of the human race—blood mixed with blood, flesh with flesh, bones with bones and dust with dust!"

When we read the Book of Mormon carefully, we recognize that Oliver was correct. The 8-day Jaredite battle at Cumorah could not have involved more than a few thousand, as we see from the count of the actual number killed on the last two days. Coriantumr realized that two million of his people had been killed long before they reached Ramah, or Cumorah. (Ether 13) There were additional battles leading up to Cumorah. Even after four years, they could gather only a relatively few people to Cumorah, so few that after six days of battle, there were only 121 people left. The next day, there were only 59 left. Even if we assume that half the people were killed each day, that calculates to about 7,744 on the first day of battle.

Same with the Nephites.

Oliver says "tens of thousands" were to be killed, including Lamanites and Nephites.

Mormon said he could see 20,000 from the top of Cumorah. (Mormon 6:11-12). The rest of his people, the ones Mormon lists in verses 13-15, had died long before the final battle at Cumorah. Mormon and Moroni could not see those dead people from Cumorah. Let's say an equivalent number of Lamanites were killed. That totals 40,000. This fits the "tens of thousands" Oliver mentioned.

You can read this right out of Joseph Smith's own history, titled History, 1834-1836, which is found in the Joseph Smith Papers here: http://www.josephsmithpapers.org/paper-summary/history-1834-1836/83. The portion I quoted is from this page: http://www.josephsmithpapers.org/paper-summary/history-1834-1836/92

There are two important keys here.

Estimates based on the text and what Oliver and Joseph said:

Jaredites: under 10,000
Nephites and Lamanites: tens of thousands.

Estimates based on the claims of Mesoamerican advocates and anti-Mormons:

The anti-Mormons like the large numbers because there are no known locations anywhere in the Western Hemisphere where there is evidence of hundreds of thousands of people being killed at a single site, let alone 2 million.

The Mesoamerican advocates like the large numbers because they think this excludes the New York hill as a "plausible" candidate for Cumorah, which is one of the foundations of their "two-Cumorahs" theory. They think Cumorah must be a huge volcanic mountain somewhere in Mexico, large enough to accommodate these large numbers of people.

Second key: what evidence should we expect to find at Cumorah?

Our assumptions make a big difference. The smaller numbers would lead us to conclude that the New York hill fits just fine; i.e., we don't need a massive mountain somewhere upon which 2 million people could fight and die. We don't even need a place where hundreds of thousands of people could fight and die. And we wouldn't expect to find evidence of such mass destruction.

What we do have in western New York is a series of small forts and defensive positions, mass graves containing hundreds, but not thousands, of bodies, and in the vicinity of the hill Cumorah itself, decades of farmers plowing up arrowheads, ax heads, and similar stone weapons which they gave away or sold to tourists. Just a few years ago a Jaredite era arrowhead was found on top of the Hill Cumorah, not far from the parking area. All of this is consistent with the tens of thousands of people killed, but not the hundreds of thousands claimed by anti-Mormons and Mesoamerican two-Cumorahs advocates.

By comparison, consider the famous Battle of Hastings, which was relatively recent (1066). The battle changed the course of British history. 10,000 men were said to have died there, in a specific spot of England that was well documented and known ever since. They found one skeleton that might be related to the battle, as explained here. The article says, "No bones have previously been discovered of anyone who fought and died during the historic event.... The Norman invaders were thought to have buried their dead in a mass grave. Although no grave pits of the Normans have been found, it is believed that this is due to the high acidity of the soil, which means all the remains have long deteriorated."

There are ongoing debates about even the location of the battle. E.g., here and here.