The tragedy of Lebanon 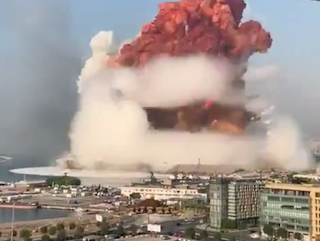 The explosion yesterday in Beirut is such a tragedy I wanted to comment on it briefly.

Of all the countries in the Middle East, I'm partial to Lebanon. Some years ago, after working with some Lebanese people in one of my companies, we spent a couple of weeks in Lebanon with an archaeologist and some Lebanese friends.

Most Lebanese speak French, at least as a second language, so I could get around easily. The history and scenery were wonderful. The people were friendly. We were the first Americans most people had seen in many years.

We spent one night in the Beqaa Valley. Syrian troops were everywhere (this was during the Syrian occupation). The U.S. State Department had warned us not to go, but our friends assured us it was safe and it was, sort of, so long as it wasn't obvious we were Americans. (Speaking French helped with that). We visited Baalbek, Byblos, Sidon, The Cedars of God in the Kadisha Valley, etc.

Lebanon is one of the most dramatic examples in the world of lost opportunities.

For commentary by independent journalists who usually seem to get their stories right: