A Mighty Nation - an example of bias confirmation

From time to time we like to look at examples of bias confirmation. By now, it is obvious to readers here that people can confirm pretty much any bias they have. They usually frame it as "following the evidence" and they usually believe that's the case.

Of course, any two people can look at exactly the same evidence and reach contradictory conclusions. That's why it's more important to understand the bias people are confirming than to debate the merits of the evidence.

This example involves the "mighty nation" mentioned in 1 Nephi 22:7.

7 And it meaneth that the time cometh that after all the house of Israel have been scattered and confounded, that the Lord God will raise up a mighty nation among the Gentiles, yea, even upon the face of this land; and by them shall our seed be scattered. (1 Nephi 22:7) 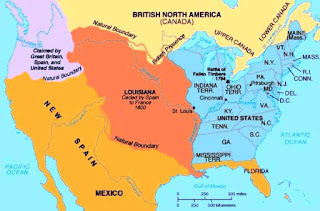 The map is a little misleading because France controlled the Louisiana territory from 1699-1762, when it was ceded to Spain. In 1800, France took it back before selling it to the U.S. in 1803. But even when France "owned" the territory, it controlled very little of it, just as Spain controlled very little of the west. These areas of North America were inhabited by Native Americans with little interference from Spain, apart from attempts at religious conversions.
During those 300 years preceding the marvelous work of the restoration, no other nation came close to the level of influence Spain exercised in the Western Hemisphere.
The double fallacy here is that (i) Spain wasn't "raised up" in the New World and (ii) we cannot say from the text where Nephi's seed lived. The text doesn't even mention the Western Hemisphere. For that identification, we have to rely on Joseph Smith and the D&C, but both of those sources specifically identified the Indians from New York to Kansas as the Lamanites.
What we can tell is that the first mission to the Lamanites, the first fulfillment of D&C 22:7, started in October 1830 as Oliver Cowdery and three others took the Book of Mormon to the Indian tribes of New York, Ohio, and Missouri/Kansas, where they had been scattered from their ancestral lands.

Soon after this article was published, I was delighted that a friend, Bruce Webster, shared his 2013 blog post with me. He reached the same conclusion that 1 Nephi 22:7 refers to the Spanish Empire.

He also ignores the point that the mighty nation was to be raised up in the New World.

The US really didn’t become a “mighty nation” until the late 19th or early 20th Century. Spain, on the other hand, established a global empire pretty much coinciding with the discovery (by Spain) of North and South America at the end of the 15th Century, and it remained a mighty nation well into the 19th Century.

Spain conquered and claimed half of North America, all of Central America, and most of South America, in the process killing, enslaving, and scattering many of the native American inhabitants. The US, at the time of publication of the Book of Mormon, occupied less than half of its current extent and really hadn’t done much “scattering” of native Americans compared to what Spain had done for the previous 240 years.

For that matter, much of the “scattering” of native Americans that happened in the eastern half of the United States happened under British rule (see “British Territory” on the map above), before the US was founded.

This would be a good point if it was true.

And, somewhat redundantly, the US never occupied Mesoamerica, which is where Book of Mormon events most likely occurred.

This is the bottom line for both Bruce and Kirk. And yet, Joseph Smith failed to take the Book of Mormon to Nephi's descendants in Mesoamerica. Instead, he took it personally to the entirely distinct Native Americans he (and the Lord) called Lamanites, as explained in D&C 28, 30, 32, and elsewhere.

Some references to the United States as a "mighty nation" follow:

The Book of Mormon prophecies concerning the future of America have been referred to in our hearing during this conference, wherein it is stated that this nation, though it becomes a mighty nation, still it can stand in security here only as it serves the God of this land. That conception was in the hearts of the men who rounded America.

believe America to be a Christian country. I believe the principles which are set forth in her fundamental laws to be derived from, consciously, the Savior of the world. His precepts, his principles of truth and living, have been set forth by the founders and the fathers in our laws and statutes; and America, in order to continuously and satisfactorily fill her great mission as a mighty nation, must conform to those fundamental laws and principles of truth, in my humble judgment.

Here then a great and magnificent spectacle breaks in upon the view. A mighty nation rising in arms to recover her natural rights, and boldly [Page 9] braving the storm of regal ambition.

The battle of the European warriors is indeed with a confused noise. It is the bruit of a war, which originated, on the one hand, in the too sanguine hope of planting the tree of liberty in every clime, and is prosecuted, on the other, with an unwarrantable acrimony against a mighty nation, struggling to be free, if not in direct repugnance to the natural rights of mankind, and the laws of eternal justice. If, in this huge contest between the sentiments of equal liberty, and the unnatural systems of arbitary power, the latter should prevail, America, in tears, will behold the triumph.

Of all the injuries done us, none ought to be so quickly resented, or so severely punished, [Page 23] as an injury done to our country. The interests of our country, not only comprise our own, but the interests of a growing and mighty nation; the man, therefore, who seeks to injure his country, is guilty of the blood of millions.

The retiring President retained the full health and strength, the vigor and activity of a strong body and sound mind, equal to the functions of his elevation, and fitted to relish the fascinating charms of his grandeur. But these were not the motives for his consenting to appear at the head of a mighty nation▪ When his country could spare his agency, no inducement remained with him to continue in her service, and he resolved once more, "to pass the remainder of his days in honorable repose, and place his glory beyond the reach of fortune."

Calm reflection here performed the miracles of inspiration, and deliberate valor acquired the achievements of Gods. An empire happy, a mighty nation freed from tyranny. These are the glorious monuments of our revolution; these are the immortal trophies of which we boast.