It's not about the geography

The Lord explained that one reason for the restoration was "That faith also might increase in the earth." (Doctrine and Covenants 1:21)

Yesterday, Gallup released a poll under this headline:

The charts accompanying the article show the downward trends, which seem to show the opposite of an increase in faith in the earth.

It's obvious that younger generations are disaffiliating with churches.

Similar trends are apparent among LDS.

Recently, Patrick Mason gave a fireside in Logan during which he discussed these trends. He pointed out that retention rates among LDS Millennials is below 50%.

He explained some of the reasons why people are "switched off" from Church activity, including the Gospel Topics essays.

He also discussed the data from The Next Mormons, which I've discussed previously on this blog.
http://www.bookofmormoncentralamerica.com/2019/03/the-next-mormons-by-jana-riess.html
The data indicates that younger LDS are less likely to believe fundamental doctrines.
For example, only half of LDS millennials are confident that the Book of Mormon is a literal, historical account. Given the way BYU and CES teach the Book of Mormon with a fantasy map, it's actually surprising that even half of them believe it's a real history. 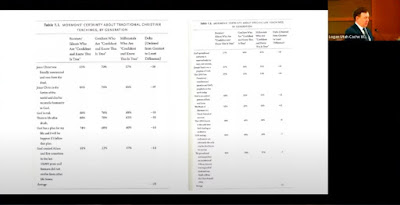 Some people think this blog focuses on Book of Mormon geography, but that's not what it's about.

It's about the intersection of faith, history, science, and psychology.

Of course, we can each believe whatever we want, and we can interpret the scriptures and Church history to confirm whatever beliefs we choose. I write about M2C (the Mesoamerican/two-Cumorahs theory) here because, while for some people M2C may build faith, for others it undermines faith.

As I've explained many times, I write this blog for those who, like me, have changed our minds about M2C after having been indoctrinated by the M2C scholars who dominate BYU and CES. Once we learned what Joseph, Oliver and their contemporaries actually taught about Cumorah, we saw things in a new light. Our confidence in their credibility and reliability increased.

Long ago Joseph Fielding Smith warned that the idea that Cumorah is in Mesoamerica instead of in New York would cause members to become confused and disturbed in their faith in the Book of Mormon. That should be obvious, because to reject the New York Cumorah in favor of M2C (the Mesoamerican/two-Cumorahs theory), you have to cast doubt on the credibility of Joseph Smith, Oliver Cowdery, all their contemporaries, and all their successors who have ever discussed the topic.

Related to that, the interpretation of the text and its historicity are greatly influenced by the assumption we make about Cumorah. If we accept the New York Cumorah, then we can interpret the text consistently in light of relevant archaeology, anthropology, geology, geography, etc., all of which corroborates the teachings of the prophets.

If we reject the New York Cumorah, we can also confirm that bias by citing various sciences, but each step of the way we are rejecting the teachings of the prophets about Cumorah, chalking them up as the uninformed speculations of men expressing their own incorrect and uninspired opinions in General Conference. Instead, the modern M2C intellectuals have saved us from persisting in the ignorance of the prophets by adopting the M2C theory developed by an RLDS scholar in the early 1900s from whom even the RLDS First Presidency distanced themselves.

Unmoored from the Cumorah anchor, anything goes. Now we're told that Joseph didn't use the plates or the Urim and Thummim. He didn't even really translate anything; instead, he merely read words that appeared on a stone, or in a vision.

Maybe "faith will increase in the earth" as the missionaries teach people that Joseph didn't really translate anything. More people will join the Church once they learn that when Joseph said he "translated" the plates, he really meant he didn't use the plates but merely read words that appeared on a stone he put in a hat.

Maybe "faith will increase in the earth" as more people learn that the early Church members created, taught, and promulgated false speculation about the New York Cumorah, and that Church leaders for over 150 years continued to mislead members by repeating that speculation, including members of the First Presidency speaking in General Conference.

Maybe "faith will increase in the earth" as the M2C intellectuals and revisionist Church historians continue to reframe the narratives that originated with Joseph Smith, Oliver Cowdery, and their contemporaries.

So far, it doesn't seem to be working out, though.

Maybe it is time to try corroborating the teachings of the prophets about Cumorah instead of repudiating those teachings?