Many of our ideas are encrusted with old ideas that we inherited without thinking them through. Taking a fresh look at the language of the scriptures can provide new insights.
Such a fresh look leads to the development of multiple working hypotheses, which in turn can lead to unity about the question of historicity and geography. People may not agree on the specifics, but they should be able to agree that alternative approaches are feasible and reasonable.
That's all we can ask.
But it's not what our scholars are permitting, especially the scholars at Book of Mormon Central who continue to ban and criticize any working hypothesis other than the one they've been teaching for decades. They've welded M2C into their very logo.
_____
People who discuss Book of Mormon historicity and geography often focus on the "narrow neck of land," as if it is the critical element of the geography. When I point out that that term appears only once in the text (Ether 10:20), people usually don't believe me. But then they check for themselves and discover it's true. (There is also a "narrow neck" and a "small neck of land," which some people conflate to refer to the same thing as the "narrow neck of land," as if different terms mean the same thing, which I'll discuss below.)
Years ago, Andrew Hedges pointed out that the Mesoamerican setting requires its proponents to accept as a "narrow neck of land" a crossing that is several times wider than the "narrower" neck in the Isthmus of Panama.
https://rsc.byu.edu/vol-9-no-3-2008/narrow-neck-land
In the early days of the Church, Parley and Orson Pratt claimed Panama was the "narrow neck of land." That reflected the common knowledge of the day, as shown by Alexander von Humboldt, whose 1811 book Political Essay on the Kingdom of New Spain was on sale in Palmyra in 1818 at the printing shop Joseph visited weekly to get the newspaper for his father.
Three times in that book, Humboldt referred to the isthmus of Panama as a "neck of land." But Humboldt did not refer to it as a "narrow neck."
It's difficult to imagine that anyone on the ground would refer to Panama as a "narrow neck." If you've traversed the Panama Canal, as I have, you know it "narrow" only in the sense that, looking at a map or from space, it appears "narrow" compared with the rest of the continent. 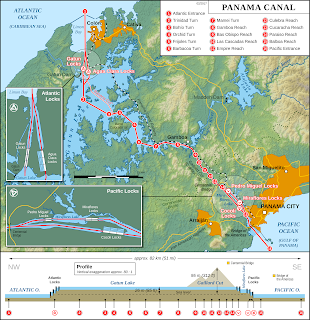 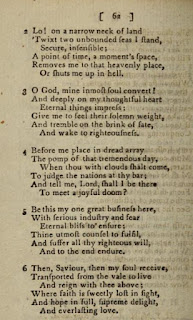 Lo! on a narrow neck of land
'Twixt two unbounded seas I stand,
Secure, insensible;
A point of time, a moment's space
Removes me to that heavenly place,
Or shuts me up in hell.
Hymn LVIII, A Collection of Hymns for the use of the people called Methodists, (London 1786) p. 62.
The inspiration for this stanza has generated some speculation, as shown in this discussion in an 1860 lecture on Wesley. The author wrote
The Rev. Dr. Hannah has favoured me with the following note: "I am inclined to think that the sublime stanza which begins,
"Lo, on a narrow neck of land,"
is a magnificent paraphrase of a thought which occurs in different writers not unknown to Charles Wesley. I give two instances: --'Many witty authors compare the present time to an isthmus, or narrow neck of land, that rises in the midst of an ocean, immeasureably [sic] diffused on either side of it.' (Spectator, No. 590.) --'We are here in a state of probation, situated, as it were, upon a neck of land with the two infinite oceans of a miserable and happy eternity on either hand of us.' (Horbery's Sermons, IV., Part II., on Acts iv.12. --Horbery was born 1707, died 1773.)"
The coincidence is certainly very remarkable, and the stanza may have been so suggested. Charles Wesley was in the habit, as the reader will find in subsequent part of the Lecture, of paraphrasing other men's thoughts after this fashion. But I cling to the old Tradition, which was in existence during the Poet's life-time,--that the Land's End suggested the imagery. The Hymn, which is called "An Hymn for Seriousness," was written and published very soon after Charles Wesley's first visit to that remarkable spot. 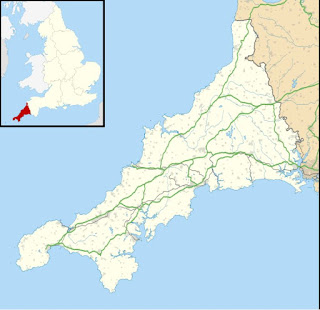 Land's End is the most south-westerly point of Cornwall in England. (see map diagram)
It's a long peninsula. Wesley referring to this peninsula as a "narrow neck of land" in a well-known hymn opens further possibilities for understanding the Book of Mormon text.
_____
An 1776 book titled The Practical Navigator defined the terms this way:
A Peninsula is a Part of Land almost surrounded with Water, save one narrow Neck of Land which joins the same to the Continent.
An Isthmus is a narrow Neck of Land joining the Peninsula to the Continent, by which People may pass from one to the other.
Another source, the 1785 Geographical Magazine, points out that a narrow neck could be land or water. With that in mind, it makes sense that Ether 10:20 specifies a "narrow neck of land."
A Strait is a narrow neck of water, uniting one sea to another; as, the Straits of Gibraltar, the Straits of Caffa, etc.
A Sea is a portion of water everywhere inclosed [sic] with land, except a narrow space or neck which unites it to the ocean; as, the Mediterranean Sea, the Adriatic Sea, the Red Sea, etc.
An Isthmus is a narrow neck of land, by which a peninsula is united to a continent; as, the Isthmus of Darien, the Isthmus of Corinth, etc.
A Peninsula is a portion of land, every where surrounded with water, except a narrow space or neck of land, which unites it to the continent; as, the Morea, which joined to Greece; Crim Tartary, to Little Tartary, etc.
Multiple terms and translations.
In addition to the "narrow neck of land," there is a "neck of land" and a "small neck of land."
M2C proponents always conflate the terms narrow neck, narrow neck of land, and small neck. I think they are different terms because they refer to different things.
narrow neck: a narrow feature between larger bodies of either land or water
narrow neck of land: an isthmus or connection between continents, or a connection between any two land masses, or a long narrow peninsula (as Wesley used it).
small neck of land: connotation suggests small in all directions, contrasted with narrow which connotes relatively long compared to width.
It's also interesting that that the translation of these terms into other languages has, in some cases, removed the distinction.
Those who don't read English are reading the M2C interpretation, not the text Joseph translated.Examples.Alma 22:32 reads:thus the land of Nephi and the land of Zarahemla were nearly surrounded by water, there being a small neck of land between the land northward and the land southward.In French, the passage is translated like this:c’est ainsi que le pays de Néphi et le pays de Zarahemla étaient presque entourés d’eau, une étroite bande de terre existant entre le pays situé du côté du nord et le pays situé du côté du sud.Alma 63:5 reads:therefore he went forth and built him an exceedingly large ship, on the borders of the land Bountiful, by the land Desolation, and launched it forth into the west sea, by the narrow neck which led into the land northward.
In French, it reads:s’en fut construire un navire extrêmement grand dans les régions frontières du pays d’Abondance, près du pays de Désolation, et le lança dans la mer de l’ouest, près de la langue étroite qui menait au pays situé du côté du nord.Ether 10:20 reads:20 And they built a great city by the narrow neck of land, by the place where the sea divides the land.In French, it is:20 Et ils construisirent une grande ville près de la langue étroite de terre, près de l’endroit où la mer divise le pays.If you don't read French, you can see that in all three cases, the French uses the term étroite, which means "narrow." You don't get the English distinction between "small" and "narrow." The M2C intellectuals say the terms are synonymous. That's possible, but they have different connotations that are lost in the French translation.Again, these are examples of an interpretation, not a translation.Joseph (or Mormon/Moroni) used different terms. Why should the foreign translations use the same terms?The French does use "bande" instead of "langue" here, which is an interesting choice. "Langue" means "tongue" or "language," but "langue de terre" means a "spit of land." Like a tongue, a spit of land is "a small point of land especially of sand or gravel running into a body of water.""Bande" means a "strip" or "stripe."Instead of a "small neck of land" we have a "narrow strip of land."Instead of a "narrow neck" we have "a narrow tongue." A neck connects two bodies of water or earth, but a tongue extends from one without joining to another. This is a problem for any proposed geography.In Alma 63:5, "by the narrow neck" becomes "near the narrow neck." This, too, loses the possible alternative meanings of the phrase, such as "through the narrow neck," "by means of," or "in the vicinity of the narrow neck."_____
Be careful any time you read an interpretation of the Book of Mormon that insists only one possibility is feasible, or, worse, "correct."
Posted by jonathan3d at 11:42 AM