Our friends at FairMormon have changed their organization's name to FAIR (Faithful Answers, Informed Response) and their website to https://www.fairlatterdaysaints.org/

They've also removed the bizarre "apologetic" videos they posted a few months ago. 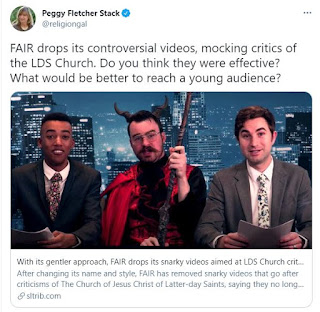 “We are fact checkers and clarifiers. We want to provide fact checking and clear explanations that all parties can trust. We fully understand that not everyone will like our conclusions as we are believing members of the church. However, we want everyone to be able to trust our review of the facts. This means avoiding personal attacks or derogatory language."

This is a welcome change--maybe.

One big problem with FAIR remains evident in Scott's statements. He refers to "our conclusions." That's the opposite of being "fact checkers and clarifiers."

There are lots of self-proclaimed "fact checkers" in the media, both right and left, that use "fact-checking" as a ruse to promote partisan agendas. That has long been the case at FAIR. If FAIR continues to promote only one of a variety of faithful approaches to the issues, it will remain problematic even if it drops the personal attacks.

FAIR has a long history of resorting to logical fallacies, including ad hominem attacks, that undermined their apologetics. That was understandable, given the similar approach taken by FARMS and its successors (and the M2C citation cartel as a whole), but this change in editorial policy could be significant.

Now let's see if they live up to their commitment.

We will see if FAIR's new direction is window dressing or substantive by whether they invite a more diverse group of faithful contributors.

A big problem with FAIR and the rest of the M2C citation cartel is the way they accept as a given some of the same assumptions relied upon by MormonStories, CES Letter, etc. Reconsidering those assumptions, rather than debating with critics about the implications of those assumptions, would be far more productive.

Ideally, they would adopt an approach of multiple working hypotheses that recognize the full spectrum of faithful explanations. So far, they've consistently refused to do so, just as Book of Mormon Central, the Interpreter, BYU Studies, and other members of the M2C citation cartel have refused to do.

For example, look at the FAIR explanation for the Hill Cumorah.

While there are helpful resources there, it is mingled with a collection of misinformation, deflection, and interpretations framed as facts. The entire article is designed to promote M2C instead of providing a factual background for people to make informed decisions.

They don't inform readers about, let alone deal with, Lucy Mack Smith's recollection that Joseph told her it was Moroni who identified Cumorah the first time they met; her recollection that Joseph referred to the hill as Cumorah before he even obtained the plates; Moroni telling Joseph that the record "was written and deposited not far from" Joseph's home in Palmyra; Martin Harris referring to the hill as Cumorah before the Book of Mormon was published; Oliver stating it was a fact that the final battles took place at the New York site; that Joseph wrote D&C 128:20 in 1842 in the context of the New York Cumorah (Letter VII had been republished by Joseph's brother Don Carlos in the Times and Seasons just the year before, and was republished again in 1844 by Joseph's brother William in the NY Mormon newspaper called The Prophet); or that all of Joseph's contemporaries and successors who ever addressed the topic reaffirmed the New York Cumorah, while none have repudiated those teachings.

Instead of informing readers about the archaeological and anthropological evidence that supports the New York Cumorah, they cite a list of fanciful "requirements" for Cumorah that appear nowhere in the text but are designed to promote M2C (the Mesoamerican/two-Cumorahs theory).

Maybe, with their new editorial direction, FAIR will edit this entry to present a variety of faithful views so readers can make informed decisions. We'll see.