The concepts of "free speech" and access to information is in the news a lot lately, for good reason. People cannot make informed decisions without good information. President Nelson has taught that "good inspiration is based upon good information."

Yet the twin citation cartels deprive people of good information.

The M2C/SITH citation cartel, led by Jack Welch, Dan Peterson, and Scott Gordon, continues to demand allegiance to their particular interpretations of Church history and Book of Mormon historicity. They and their followers not only don't want people to know about alternative faithful interpretations, but they treat fellow Latter-day Saints as apostates if they don't swear allegiance to M2C and SITH.

The critical citation cartel, led by John Dehlin and Jeremy Runnels, also continues to demand allegiance to their particular interpretation of Church history and Book of Mormon historicity. They and their followers also don't want people to know about alternative faithful interpretations.

In both cases, the cartels cannot tolerate alternative interpretations, even (especially) when those alternatives both (i) explain the evidence and (ii) corroborate the teachings of the prophets.

Both cartels resort to censorship and logical fallacies to maintain their control over their respective followers. On this blog we've looked at many examples over the years.

You'd never know it by reading or listening to either of the cartels, but people can be faithful Latter-day Saints regardless of what they believe about Book of Mormon historicity/geography and the translation of the Book of Mormon.

This graphic, which I use frequently, demonstrates the concept. 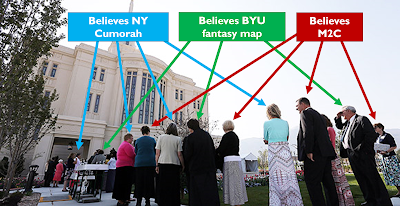 On this blog, we encourage readers to consider all the relevant facts and multiple interpretations of those facts (multiple working hypotheses). We freely cite and refer to the twin citation cartels because we think the best way for people to make enduring decisions is to make informed decisions.

Yet Jack Welch, Dan Peterson, and Scott Gordon, along with John Dehlin and Jeremy Runnels, all insist on intellectual conformity and compliance. We think it's an enormous mistake for Book of Mormon Central, in particular, to demand allegiance to the personal opinions of Jack Welch, to the exclusion of alternative faithful interpretations.

The worst offender is undoubtedly Book of Mormon Central. They directly violate their own purported mandate by insisting on M2C and SITH. They've raised and spent over $8 million from faithful Latter-day Saints by claiming "neutrality" on these issues while censoring alternative faithful views and by teaching only one permissible interpretation of the Book of Mormon historicity/geography.

If I was a donor to Book of Mormon Central, I'd be furious that my donations were misused and squandered this way.

Actually, had I donated to any of these cartel members, I'd be furious.

The Church is, or should be, a big tent that accommodates a variety of interpretations, interests, and areas of emphasis.

Paul and Moroni explained this a long time ago:

4 Now there are diversities of gifts, but the same Spirit.

5 And there are differences of administrations, but the same Lord.

6 And there are diversities of operations, but it is the same God which worketh all in all.

7 But the manifestation of the Spirit is given to every man to profit withal.

8 For to one is given by the Spirit the word of wisdom; to another the word of knowledge by the same Spirit;

11 But all these worketh that one and the selfsame Spirit, dividing to every man severally as he will.

12 For as the body is one, and hath many members, and all the members of that one body, being many, are one body: so also is Christ.

14 For the body is not one member, but many.

18 But now hath God set the members every one of them in the body, as it hath pleased him.

19 And if they were all one member, where were the body?

20 But now are they many members, yet but one body.

22 Nay, much more those members of the body, which seem to be more feeble, are necessary:

23 And those members of the body, which we think to be less honourable, upon these we bestow more abundant honour; and our uncomely parts have more abundant comeliness.

24 For our comely parts have no need: but God hath tempered the body together, having given more abundant honour to that part which lacked:

25 That there should be no schism in the body; but that the members should have the same care one for another.

27 Now ye are the body of Christ, and members in particular.