The January 1900 issue of Autumn Leaves reported on a debate about Limhi's explorers that involved this question: "Did Ether take the plates to the land Desolation, or did Limhi's party go to New York State?" 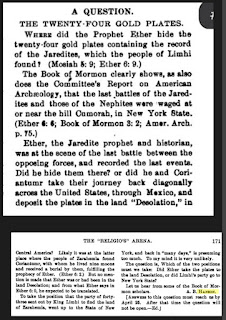 The assumption behind the question is that the final battles of the Jaredites took place in New York, but that the "land of Desolation" was in Mexico.

This is the logical fallacy of false dilemma or false dichotomy that our M2C friends engage in. In this case, the false dilemma is that they don't consider a third option; i.e., that the land of Desolation was not far from New York.

But the limited model only works if Cumorah is in Mexico, despite what Joseph, Oliver, and their contemporaries and successors taught about Cumorah in New York. Hence the development, by a process of reasoning, of M2C.

The debates in the early 1900s never considered the possibility of a limited geography based on the New York Cumorah.

Our current M2C citation cartel likewise rejects the possibility of a limited geography based on the New York Cumorah.

That's why so much confusion exists, even though Joseph and Oliver explained the facts in words as plain as words can be.

Those interested should read an awesome blog that is documenting the origins of M2C.

Definition: A false dilemma, also referred to as false dichotomy, is an informal fallacy based on a premise that erroneously limits what options are available. The source of the fallacy lies not in an invalid form of inference but in a false premise.