Under the Banner of the Interpreter, episode 2 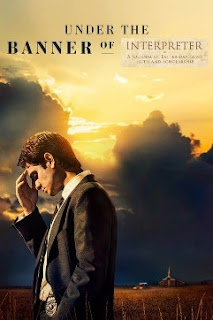 I planned to publish my observations about LDS apologetics and apologists in episode 2, but I'll publish that one later.
To quote the Captain from Cool Hand Luke, "What we've got here is failure to communicate."
It's funny, in a way. I've said from the outset that if people are upset or threatened by my ideas, my blogs, my books, etc., they shouldn't read them.
What I offer is an alternative to the SITH narrative that I find unbelievable. I don't think SITH accounts for the entirety of the historical evidence, and I think it contradicts common sense, the scriptures, and what Joseph, Oliver, their contemporaries and successors consistently taught.
Others, such as Brother Kraus, disagree. That's great.
I think it's awesome to have multiple working hypotheses based on the same facts, but my position on that (as well as my particular hypothesis) is intolerable to the SITHsayers, particularly those in the citation cartel.
Last year I was at BYU and a friend of mine told me people were being employed to read and analyze my work. I still can't understand why the M2C and SITH citation cartel spend so much time and effort on this, especially when all we'd have to do is have a conversation (which they refuse to have).

What they don't get is, I'm happy for people to believe whatever they want. Unlike the Interpreter, I encourage people to make informed decisions and not defer to self-appointed experts to tell them what to think.

While I appreciate the attention Brother Kraus has brought to my books, I don't know how many people still read the Interpreter after so many years of publishing flawed apologetics and the theories of men, mingled sometimes with some good work.
On top of that, because his reviews of my books are so lengthy, I doubt many readers will wade through them.
Feel free to do so if you want. I'm happy to have everyone see the type of apologetics our scholars engage in.
In fact, I'm posting his conclusions at the end of this episode for everyone to see.
Lots of people have asked me to continue my interlinear notes, so as I get some time, I'm addressing his specific points on my Interpreter Peer Reviewed blog,

My two books, A Man that Can Translate and Infinite Goodness, make a case for Joseph Smith as the actual translator of the ancient Nephite plates by means of the Urim and Thummim, meaning specifically the spectacles or interpreters that came with the plates. That's my user interface as I engage with historical documents.

To put it mildly, Brother Kraus interprets the evidence differently from the way I do.

Because of our different approaches, throughout his reviews Brother Kraus puts words in my mouth and misrepresents my positions to reach his conclusions.

As a researcher for Book of Mormon Central and contributor to the Interpreter, Brother Kraus has been well trained in the citation cartel's mantra: "We're the scholars designated to interpret and enforce conformity to our own opinions, so trust us. There's no need for anyone to make their own informed decisions."

Anyone who still reads the Interpreter will probably take his advice. Which is fine with me.

Surely Brother Kraus' father, family, and other collaborators are just as proud as Dan Peterson with the way Brother Kraus misinterprets my work and tells his readers what to think.

More on that in upcoming episodes.

The ideas presented in this book [A Man that Can Translate] are troubling. Neville’s Demonstration Hypothesis makes Joseph Smith a liar. He systematically tries to dismiss all sources and witnesses to the translation of the Book of Mormon that do not support his thesis, and Neville accepts and even defends the use of sources that stand in opposition to The Church of Jesus Christ of Latter-day Saints. Neville’s claim that Joseph Smith recited Isaiah from memory is unsustainable in light of the Hebrew text and other manuscripts that have been transmitted to us today. Sources regarding Joseph Smith’s seer stone are treated dishonestly, and Neville misrepresents the Church and its leaders’s position regarding the translation of the Book of Mormon.

This book is not a book to turn to if you need answers to questions or want to study the history of the Church in greater detail. Neville’s work is something that comes almost entirely out of his own imagination, punctuated by a few brief but fleeting contacts with actual evidence. More often than not, that evidence is deformed in the collision, only to have the story veer off into fantasy again.

History, on the other hand, is written through the careful analysis of documents in their context and against a wide array of evidence. Neville has not done his due diligence, and his theses reflect either a poor understanding and treatment of history or a ruthless willingness to distort the facts. This book, in short, should not be found in any serious Latter-day Saint’s library, save as a cautionary tale.

Infinite Goodness is a poor book to add to any Latter-day Saint’s library because of its many historical inaccuracies. It is further weakened by its continued insistence on his Demonstration Hypothesis, which claims that Joseph Smith merely feigned translation by reciting Isaiah from [Page 89] memory, despite the textual and historical evidence to the contrary.121 It also serves as a poor model of how to do history, how to argue honesty, and even the use of logic. It is a pseudo-historical work that gives undue credence to many attacks originally formulated by critics of the Church regarding the origins of the Book of Mormon, and its arguments can be devastating to faith for unprepared members of the Church who do not know beforehand the claims made within. We can only debate whether its effect on the reader will be worse because of the false ideas it teaches, or because of the dreadful example that it sets.