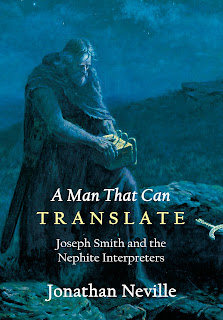 Last week Dan "the Interpreter" Peterson directed his blog readers to an article in his Interpreter journal that purports to review my popular book, A Man that Can Translate.

I was happy to see the Interpreter publish this review for several reasons. Even better, they plan to publish a second review, perhaps as soon as tomorrow, this time of Infinite Goodness.

We welcome their interest and attention. I don't mind criticism and analysis; I welcome it. I'm a truth seeker who doesn't defer to the opinions of academics, partly because I'm not an academic with a long record to defend at all costs, nor a student who seeks to defend his mentors, nor a member of the citation cartel eager to please or at least support my peers. I'm willing and eager to change my mind about anything once I find better information and interpretations.

I'm just a faithful Latter-day Saint who is interested in these topics and who finds the apologetics emanating from the Interpreter and the rest of the citation cartel unpersuasive.

Particularly when alternative interpretations make more sense to me.

Readers of this blog know that I find the very name "Interpreter" ridiculous as applied to an academic journal. It doesn't matter whether it's a reference to the actual Nephite interpreters, or merely a declaration that the "credentialed class" of the intellectuals who run the Interpreter Foundation assert the authority to "interpret" Church history and scripture for the rest of us. Either way, they enforce their "interpretations" through peer approved articles that tell everyone what to think, with allowance for some variation only within the narrow boundary of M2C and SITH, and usually featuring the rhetorical apologetic style Dan made famous.

Again, I thank Dan, the Interpreter, and the various critics who take the time to read this little blog and my books and articles. I'm optimistic that the day will come when they and the rest of the citation cartel will recognize that (i) there are multiple faithful working hypotheses based on the same facts, (ii) most people in and out of the Church don't find your style of apologetics interesting, useful or attractive, and (iii) we can all work together to build Zion with faith in Christ regardless of differences of opinions.

Someday, the citation cartel may come to embrace the concept of unity through diversity.

Naturally, the review takes a critical position, predictably framing my book as "unfortunate." And that's fine, even great, because that's what Interpreter readers expect. But at least Interpreter readers will see that there exists an alternative faithful interpretation of Church history that supports what Joseph and Oliver always said.

Readers of the Interpreter are rarely exposed to anything that challenges M2C or SITH. Like the rest of the citation cartel, the Interpreter enforces adherence to the M2C and SITH dogmas.

My position that Joseph actually translated the plates, and that he used the Nephite interpreters to do so, may shock readers of the Interpreter. They have been indoctrinated into accepting M2C and SITH, two theories which lead inevitably to this classic claim published in the Interpreter by Royal Skousen:

“Joseph Smith’s claim that he used the Urim and Thummim is only partially true; and Oliver Cowdery’s statements that Joseph used the original instrument while he, Oliver, was the scribe appear to be intentionally misleading.”

That is what passes for the scholarly "consensus" at the Interpreter and the rest of the citation cartel.
Because I disagree with Brother Skousen and instead advocate in favor of the traditional fact claims made by Joseph and Oliver, the Interpreter labels my position "historical revisionism." This is a clever reversal of history, as you'll see if you read the article (link below).
According to the Interpreter, because I still believe Joseph translated the plates, I'm the one who "fails to deal with the historical record seriously or faithfully." It's awesome. In a sense, I love the predictability of the Interpreter.

As readers of this blog know, I'm just an old retired artist living on the Oregon coast. I'd rather be fishing, kayaking, playing golf or tennis, biking, painting, reading, teaching my Institute or Pathway classes, ministering and serving in my callings, or doing anything other than doing a peer review of yet another Interpreter article. Particularly one full of the type of logical and factual fallacies typical of Interpreter articles.

However, people have asked me about it, and I suppose I owe it to readers to comment.

The author, unsurprisingly an earnest student and researcher for Book of Mormon Central which also enforces M2C and SITH, spent a lot of time on his article.

I respect his time and effort. He merits some feedback, so I started a peer review of the article. You can read it here:

If enough people are interested, I'll wade through the rest of his review and comment further. Email me at lostzarahemla@gmail.com if you would like to see more.