Because I've mentioned it a few times and provided links, readers should know that the BYU fantasy map of Book of Mormon geography has been moved to this site:

You can still see the old site here:

The map itself hasn't changed. It still teaches students that the prophets were wrong about the New York Cumorah, including President Oliver Cowdery, and Joseph Smith's own mother, close associates, and successors, as well as members of the First Presidency speaking in General Conference.

Notice how they've changed the description of their map. The new description is an improvement in the sense that they have stopped claiming their fantasy map "matches" the text "as closely as possible."

However, they are still putting their finger on the scale of "neutrality" by teaching students that the Hill Cumorah cannot be in New York as the prophets have taught.

Notice also the distinction between "any one particular geographical model" and their outright repudiation of the New York Cumorah. This is a euphemism, of course. A "model" is a framework for the overall geography.

The prophets have always taught that we don't know where Book of Mormon events took place, with the exception of the Cumorah of Mormon 6:6. That makes sense because other than Cumorah, there are numerous ways to interpret the text and the extrinsic evidence; i.e., multiple working hypotheses.

Even when we accept the New York Cumorah, there are multiple working hypotheses about the rest of the locations mentioned in the text.

Although people have a variety of interpretations regarding geography, the New York Cumorah was well established as a fact if you read authentic documents from Church history. It wasn't until L.E. Hills published a map in 1917 that scholars began teaching that there must be "two Cumorahs."

By now, "two Cumorahs" is the de facto standard because it is being taught throughout the Church. 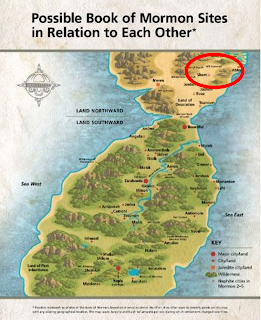