New video: For a couple of years now, Paul DeBarthe has hosted a weekly discussion of topics related to the Book of Mormon. Presenters represent a wide range of perspectives, including scholars and laypersons from every imaginable background, each providing thoughtful and thought-provoking presentations.

This week, one of the discussions was uploaded to YouTube. You can see it here:

This is a presentation by James W. Lucas, a New York lawyer who also presented at the Mormon History Association in June in Logan, Utah.

The title of the video: How the Book of Mormon was translated using the Urim & Thummim interpreters (not a stone in a hat)

This is an important presentation that deserves a broader audience.

The presentation itself is about an hour long, with an additional hour of Q&A afterwards. 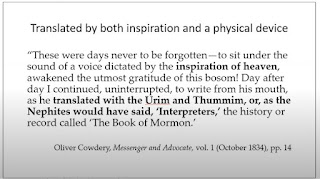 This morning on my twitter feed, both "Joseph Smith" and "Mormonism" were trending. As you can imagine, all kinds of topics are being discussed.

Apparently the Twitter trend was generated by a letter announcing a new Institute course that was released yesterday:

This could be an awesome course. As an Institute teacher (and Pathway missionary) myself, I know there is a need for such a course.

I'm hopeful this is a chance for students to learn how to find answers in reliable sources such as the scriptures and actual Church history, particularly the Joseph Smith Papers, instead of relying on the theories of a handful of LDS scholars.

The scriptures and the original sources are awesome.

The teachings of the scholars, particularly those in the M2C/SITH citation cartels, not so much.

I look forward to seeing the course when it is released.

Along those lines, one of the topics on Twitter was chiasmus.

In an awesome book titled Poetic Parallelisms in the Book of Mormon, Donald W. Parry has published the entire text in parallel format. You can download it here:

There are multiple working hypotheses regarding chiasmus, aka "inverted parallelism," as well as other forms of Hebrew parallel structures.

In my view, the presence of these parallel structures is good evidence that Joseph Smith actually translated an ancient record. These structures were not only known before Joseph translated the plates, but they were embodied in the works of Jonathan Edwards and others. I think the Lord prepared Joseph for his role as translator by enabling Joseph to absorb this language and structure into his own lexicon so he could effectively translate the engravings on the plates.

Critics of the Restoration predictably cite such evidence to suggest that Joseph composed the text. The forget the simple and obvious point that evidence of composition is also evidence of translation because a translator necessarily uses his/her own lexicon in the process of translation.

Michael Quinn, in an extended footnote, disputed Welch's claim. You can read it here and make your own decisions about what to think:

For me, it's difficult to disagree with Quinn's well-supported conclusion:

As I told John W. Welch in a 1995 letter, I have always admired and praised his discovery of the ancient poetic technique of chiasmus in the Book of Mormon. However, I believe that he has done a disservice to all Mormon believers by his decades of misrepresent­ing America’s pre-1830 knowledge of this biblical parallelism. As stated in my text discus­sion, Hugh Nibley’s misstatements in 1975 occurred because of his lack of access to information that was not yet published or not easily available to him. That was not the case with John W. Welch, whose publications for the LDS audience since 1969, in my opinion, have manifested an escalating, intentional concealment of pre-1830 American publications about chiasmus.

In my view, the teachings of the prophets, particularly the teachings of Joseph and Oliver regarding the founding events of the Restoration, are the simplest, truthful, and trustworthy explanations. Their teachings are corroborated by extrinsic evidence.

It is continually inexplicable to me why so many LDS apologists promote SITH and M2C, especially when they have to repudiate the plain teachings of the prophets on these topics.

Regarding the Jonathan Edwards material, I realize my preliminary database is long and complex. I'm excerpting it on my dailyjonathanedwards blog, here:

Naturally, people can find other sources of these phrases. They can quibble about how close the text of the Book of Mormon tracks with Edwards' writings, including Edwards' rephrasing, paraphrasing, and even misquotations of biblical passages.

Nevertheless, the presence of Edwardsian language in the text of the Book of Mormon and Joseph's other writings is good evidence that Joseph translated the text using his own lexicon and that the Lord spoke through him in the revelations by drawing upon that lexicon--just as he does to us in our day, regardless of what language we speak.