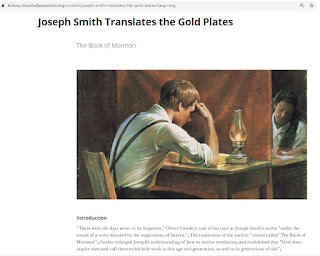 I'm continually amazed that Joseph Smith's straightforward claim that he translated the plates is even an issue today.
As I'll show in upcoming posts, the critics of the Church are having a field day with the "stone-in-the-hat" theory (SITH). It's astonishing to see our so-called "apologists" make every effort to support SITH by trying to find "evidence" in the historical record that SITH has been taught by Church leaders in the past. See, e.g., FAIRLDS.
While Church leaders have properly acknowledged the statements by David Whitmer and others, they have not repudiated the teachings of Joseph and Oliver or the revelations in the D&C regarding the translation of the plates.
Nevertheless, the scholars at the Interpreter, FAIRLDS, and Book of Mormon Central claim that Joseph Smith never translated anything in the ordinary sense of the word.
The SITH scholars insist that Joseph didn't even use the plates but merely read words that appeared on the stone he found in a well. E.g., from BYU Studies: "when Joseph “translated,” he was rarely looking at the characters on the plates, which were usually either on the table covered in cloth or hidden elsewhere in the house or vicinity."
Essentially, these scholars claim that Joseph merely pretended to translate.
While certain scholars are obsessed with convincing the Latter-day Saints that Joseph merely pretended to translate by reading words off a stone, we can all read the scriptures and see the source of such claims.

12 And, on this wise, the devil has sought to lay a cunning plan, that he may destroy this work;
13 For he hath put into their hearts to do this, that by lying they may say they have caught you in the words which you have pretended to translate.
(Doctrine and Covenants 10:12–13)

30 Behold, I say unto you, that you shall not translate again those words which have gone forth out of your hands;

No wonder the critics emphasize SITH at every opportunity.
But what does that say about the apologists who also promote SITH?
_____
Although Joseph explicitly stated that he translated the individual characters, the SITH scholars say that was a failed effort!

I commenced copying the characters off the plates. I copied a considerable number of them, and by means of the Urim and Thummim I translated some of them,
(Joseph Smith—History 1:62)

_____
Ideally, everyone in the Church would know that there are still some Latter-day Saints who believe Joseph translated the engravings on the plates. We don't think Joseph pretended to translate. We think the historical evidence corroborates Joseph's claim.
The citation cartel doesn't tolerate such beliefs, however. They insist on conformity to their "stone-in-the-hat theory (SITH).
While it's true that the SITH theory was circulating as early as 1829, Joseph and Oliver responded to those claims by explaining and reiterating that Joseph translated the plates with the interpreters that came with the plates.
Their successors testified about it repeatedly.
The revelations in the Doctrine and Covenants make it clear as well, as we'll discuss soon.
Posted by jonathan3d at 8:42 AM